Your metabolism plays a vital role in burning fat, and it's also essential to your body's ability to perform functions. It's a process that involves turning the food you eat into energy, enabling functions such as breathing, circulating blood, controlling body temperature, and digesting food, according to the US National Library of Medicine.

"Even when you're sleeping, your body requires energy for things like breathing and repairing cell damage," Donald Hensrud, MD, medical director of the Mayo Clinic Healthy Living Program, told Health.

The authors of a 2014 meta-analysis published in Medicine & Science in Sports & Exercise noted that the number of calories you need to perform those basic functions is called your resting metabolic rate (RMR), and it can impact how much energy you have on a daily basis.

Something important to remember, though: Your metabolism may not be 100% under your control. The authors of the meta-analysis pointed out that previous studies suggest that factors, like your body type, gender, and age, are things that go into making your metabolism what it is.

Here's what those activities entail and how to incorporate them into your daily routine to increase your metabolism.

When you run, swim, or bike, increase the intensity of your pace for 30-second intervals before returning to your normal speed after.

This will help you take in more oxygen and make your mitochondria, your cell powerhouses, work harder to burn energy, Mark Hyman, MD, an integrative and functional medicine specialist in private practice in Lenox, Massachusetts, and author of Ultrametabolism: The Simple Plan for Automatic Weight Loss, told Health.

A nice perk of this move: You can exercise for less time than usual and still see great results.

The HIIT Workout That Anna Kaiser Swears By
02 of 10

Keep Up Your Calorie Intake

Weird but true: If you slash how many calories you take in, your metabolism thinks food is scarce and slows down to try to conserve your energy, and halts fat-burning to conserve energy, said Dr. Hyman.

According to 2021 research published in the International Journal of Obesity, to keep your metabolism from slowing while trying to lose weight, you'll want to make sure you have enough calories to at least match your RMR. You can test for your RMR at a RMR testing site near you.

Work Out More (Or Harder)

There's a cool phenomenon known as excess postexercise oxygen consumption (EPOC), according to the American Council on Exercise (ACE), where your body can take hours to recover from an intense workout and return to its previous resting metabolic rate. During this time, your body burns more calories than it normally would, even after you stop exercising.

Resistance training, also known as strength training, is also an important way to increase your strength, endurance, and metabolism.

Here's the thing: The better shape you're in, the less benefit you'll get because your body learns to become more efficient with time. You can try to get around that by working out more or harder (again, intervals), Walt Thompson, PhD, professor of kinesiology and health and nutrition at Georgia State University, told Health.

Eat Smaller Meals Through the Day

Having more, smaller meals during the day can help you feel full, but it also might help keep your metabolism throttling, as explained in a 2014 study in Cell. Why? Having smaller meals throughout the day can help keep your blood sugar levels in a good range and prevent insulin spikes that can lead to weight gain. Try for six small meals that are around 300 calories each.

7 Reasons Raspberries Are So Good for You
05 of 10

Trans fats aren't just bad for your heart—they also slow down your body's ability to burn fat. The World Health Organization says that trans fats can have a negative effect on how your body metabolizes essential macronutrients your body needs, like the lipids in your blood and fatty acids.

Eating trans fat can cause insulin resistance and inflammation, and both of those can mess with your metabolism, said Dr. Hyman. Foods that are high in trans fats include many commercial baked goods and fried foods.

Fill Up on Protein

Your body takes more time to break down protein than fat or carbs, so you end up feeling fuller, longer. But protein may also give your metabolism a boost thanks to a process called thermogenesis, where your body uses about 10% of its calorie intake for digestion, as a 2020 Frontiers in Endocrinology study explained.

Because it takes longer to burn protein than carbs or fat, your body uses more energy absorbing the nutrients in a high-protein diet.

A quick way to get in more protein: Add whey to a smoothie. "Whey protein increases calorie burn and fat utilization, helps the body maintain muscle, and triggers the brain to feel full," Paul Arciero, a professor in the Health and Exercise Sciences department at Skidmore College who has studied whey's effects on the body, told Health.

A 2016 study published in the American Journal of Clinical Nutrition revealed that fat oxidation, the process of breaking down fatty acids, and the thermic effect, the extra energy your body needs during digestion, was greater with whey than with soy or casein.

Don't start drinking coffee if you don't already do so, but you don't need to give it up if you're drinking a reasonable amount.

Caffeine speeds up your central nervous system, and that can boost your metabolism. "Provided your cup is not laden with cream and syrup, coffee can be a great way to give you energy as well as some antioxidants," Amy Goodson, RD, a dietitian for Texas Health Ben Hogan Sports Medicine, told Health.

Coffee also improves energy levels during exercise, helping you work harder, longer, and burn more calories in the process as shown in this 2018 study appearing in the International Journal of Environmental Research and Public Health.

Why Does Drinking Coffee Always Make You Poop?
08 of 10

It's good to step away from your screen on a regular basis anyway, but research in 2016 from Northwestern University found that exposure to the type of blue light given off by smartphones, computers, and tablets immediately before and after dinner made people feel hungry and impacted their glucose metabolism. The study authors weren't sure why.

Easier said than done, of course. Research suggests that when you're stressed out, your metabolism stalls. There are a few possible reasons for this, but one is that chronic stress stimulates the production of betatrophin, a protein that inhibits an enzyme needed to break down fat, per a 2015 study published in BBA Molecular and Cell Biology of Lipids.

Other research published in 2014 in the journal Biological Psychiatry found that women who went through a stressful event the day before having a high-fat meal burned 104 less calories in the seven hours afterward than their less stressed counterparts.

Research has found that sleep is important for regulating your metabolism. One 2019 study published in the Journal of Lipid Research found that after a few days of sleep deprivation, study participants felt less full after eating and metabolized the fat in their food differently. While it's not always easy, the National Sleep Foundation recommends trying to get at least seven hours of sleep a night.

11 Health Benefits of Sleep
Was this page helpful?

24 Ways to Get More Energy Without Caffeine
5 Things to Know About Your Metabolism, and How to Harness It 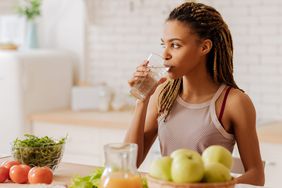