The Strange Way Fighting With Your Spouse Can Wreck Your Diet

A new study explains why a fight with your partner leads you straight to the fridge.

Heading straight for the fridge after a blowout with your partner? Marital stress and bickering can in fact work up an appetite, per a new study published in Clinical Psychological Science.

Researchers at the University of Delaware and Ohio State University studied the interactions of 43 couples, who have been married for longer than three years, by filming them eating a meal together and then attempting to talk through a problem within their relationship. While the couples' "problem discussions" took place, the scientists observed how the pair communicated, their hostility levels, and even subtle details like put-downs and eye rolls.

They also used blood tests to track the men and women's hormone levels before and after the exchanges and examined their heights, weights, BMIs, and typical diets.

RELATED: Couples Who Don't Fight Much Aren't Likely to Start

It turns out, couples who had hostile exchanges and showed signs of a distressed marriage saw a surge of the appetite-triggering hormone ghrelin post-argument, and they had poorer diets overall. However, this was only the case for those who were in a normal to overweight BMI range (30 or lower).

The amped up hunger some couples may experience after a spousal spat could have negative longer-term health implications, the study explains, such as worsened emotional eating behavior or obesity.

"Ghrelin's not just pushing you to eat," lead study author Lisa Jaremka, an assistant professor in the department of psychological and brain sciences at the University of Delaware, told Today. "It's creating a craving for specific types of foods: those that are high in sugar, high in fat and high in salt."

RELATED: 4 Ways to Control Your Appetite

Why You're Not Getting Pregnant: 6 Lifestyle Reasons To Consider
How Often Should You Weigh Yourself, If At All? 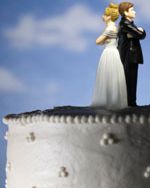 Food Fights at Home: Is Your Husband Sabotaging Your Diet?