4 Ways to Cure an Unhealthy Relationship With Food

Are you scared to have a cookie because you might eat the whole box? Do you count calories all day, then binge before bed? If you obsess about what you put in your mouth (and who doesn't?), here's how to end the madness.

Getty Images My teenage daughter's summer job was at an ice cream shop. She asked me to swing by one day so she could make me a sundae. I should have run over there and slurped down my treat with unfettered joy. But I begged off. The thought of eating a sauce-covered mountain of sugar and fat gave me a jolt of guilt and shame. I hadn't even entered the store, and I was already full of regret.

It's awful being in a dysfunctional relationship with food. I would compare it to regrettable hookups with losers in my past, but those flings didn't last very long. Food and I have been breaking up and making up since childhood. The worst part? Our affair is completely one-sided. A cheeseburger doesn't know I exist. My feelings for a cheeseburger, however, are complicated. But although I'm a chronic dieter, my eating habits are considered normal. I don't have a clinical disorder like bulimia or anorexia. I simply want to be thin and healthy.

And I'm not the only one, judging from my friends, the best-seller lists and the cult of Whole Foods. We live in a world in which we know self-starvation is bad, but somehow believe drinking only juice is good. "Our obsession with appearance, our fixation on diet and our food- and information-abundant culture have given rise to an epidemic of unhealthy relationships with food," says Michelle May, MD, author of Eat What You Love, Love What You Eat. "Food has become our focus instead of being the fuel for a full life."

To ease the strangle-hold your diet has over you, consider what about it leaves you so powerless. Check out the following culprits. Chances are, you can relate to at least one—if not all—of them.

Problem No. 1: You're ruled by rules
A healthy romantic partnership revolves around compromise. Some women, though, treat food like they would an unpredictable puppy—something to be disciplined. Ann, a photographer in New York City, keeps a list of food rules on her fridge. "Just a few," she says. "No sugar, no white or fried food, no dairy, no gluten and no carbonation. I do eat beef." A friend from Orlando packs a separate suitcase for her protein bars when she travels to make sure she won't be tempted by dubious hotel offerings. On a recent trip, there was an issue about bringing food into a country. She freaked out at immigration, ranted hysterically and cried. The officials were so shocked, they let her keep her bars.

This kind of rigidity is all about fear of losing control, says Susan Albers, PsyD, author of 50 Ways to Soothe Yourself Without Food. "Our minds love to think in black-and-white terms," Albers points out. "Right versus wrong. Fat versus thin. Perfect versus ruined." Or that's how it might seem when in the throes of an obsession. "Some people feel lost without structure," adds Mary Pritchard, PhD, professor in the department of psychology at Boise State University. "Walking into a restaurant or opening a fridge kicks off an algorithm of counting."

These thoughts aren't limited to type As, though. They're on a mental loop in many of our heads, thanks to an overload of (often conflicting) information about what we should and shouldn't be eating. And unless you clue into this desire for dietary perfection, you can do serious damage to your self-esteem. "When you break a rule, that can spiral into 'I'm a bad person,'" Albers notes. "But food isn't good or bad. There are 50 shades in between. Rule-based eating doesn't take hunger and cravings into account."

And that sets you up for a fall when your stomach starts grumbling and you're forced to deviate from your well-laid eating plans. Instead of sticking with a regimen, try to be a bit less strict. "I encourage women to eat a wide variety of foods," Albers says. "It's healthier from a nutritional and emotional standpoint." Of course, that's much easier said than done. A half-step: Every day, break your rules, just a bit. "Start small," she urges. "A piece of bread. Pasta once a week. When you see that nothing bad happens, flexibility won't be as intimidating. You might even enjoy it."

Problem No. 2: You don't trust yourself
Another given in a healthy relationship is trust—believing you and your partner will do the right thing when faced with temptation. In a dysfunctional "foodship"—as I like to call it—distrust can be rampant. I know I am weak around cake, for instance. To keep from eating too much, I have doused baked goods in water. A friend told me, "I use hot sauce." Another: "Liquid soap."

My friend Rachel from New Jersey has a full bag of tricks. "I use a timer between bites," she explains. "When I'm done, I freeze the leftovers so I won't eat them. My boyfriend is in charge of doling out snacks under the instruction that he can't give me more than my allotment, even if I beg."

It's not our fault that it's so hard to resist chips and candy. It's plain biology: Eating carbohydrates (plentiful in pizza and cupcakes, but not so much in kale) boosts our levels of the feel-good hormone serotonin. And we may have happy childhood associations with certain treats. No wonder that some of us crave comfort food when we're upset, bored, lonely, etcetera. Stress triggers a jones for sugar; cookies are readily available. If you try not to think about the treat, your mind just becomes fixated. So when you finally buy the cookies, you're too obsessed to stop at just one (or three).

If we were more mindful of hunger cues, though, we'd make better choices. "Before eating, pause to ask yourself, Does my body need fuel? Why am I thinking about food if my body doesn't need it?" Dr. May says. If you do need to eat, listen to your cravings: Indulging a little now can keep you from overdoing it later, Dr. May notes. As for how much to eat, your body can help with that, too. "The right amount is about feeling good," Dr. May says, and not uncomfortably stuffed afterward.

More: 31 Superfood Secrets for a Long and Healthy Life

Problem No. 3: You Beat Yourself Up
Imagine having a boyfriend who, after you made a small mistake, called you a worthless failure. You'd dump his butt. But many of us do the same thing to ourselves if we dare to enjoy a piece of cake. "The food-as-enemy voice shames you for overindulging," Albers says. "The food-as-friend voice is a cheerleader. If you mess up, it encourages you to get back on track."

To silence your inner bitch, steer dark food thoughts to the light. When you're being hypercritical—I'm a failure. Everyone thinks I'm fat—stop and listen to what you're saying to yourself. Then replace the harmful message with a kind one, like No one's perfect. My friends and family love me. Over time, this will become natural.

Speaking of family and friends, do yours include dieters who are even more critical than you are? They're not helping. Your ideal dining companions: "People who eat slowly and take pleasure in their food," Albers says.

Problem No. 4: You really, really want to be skinny
A healthy relationship is honest. An unhealthy one is full of deception. I know I lied to myself during a recent juice fast. I said I was doing it for the antioxidants. Bull! I wanted to lose weight. "The number one cause of food restriction is body dissatisfaction," Pritchard says. "Ninety percent of women don't like what they see in the mirror."

There's nothing wrong with wanting to be slim. But depriving yourself of crucial nutrients (or eating only a select few)—whether through cleanses, fasts or cutting out food groups—and pretending it's all for the good of your health is a dangerous game. Ironically, it can backfire and set off the "starve, binge, hate yourself" cycle that makes you gain weight instead.

And all that negative self-talk is no recipe for weight loss, either. I know that when I'm nicer to myself, I tend to eat better and maintain a weight that's healthier for my body—and my sanity. "In our culture, so much is driven by shallow perceptions of what's worthwhile," Dr. May says. "By obsessing about weight loss, we're not achieving what we're capable of. It's crowding out stuff that's more important"—like our happiness and well-being. I'll eat to that. 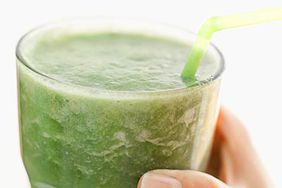 How I Detoxed Using a 9-Day Cleanse