Three women share the bedroom boosters they discovered unexpectedly. Trust us: You have not read these before.

Getty Images Tips for revving up your sex life have become clichéd: Buy satin sheets! Light candles! Do this Cirque du Soleil-esque move! Sometimes, however, the real trick lies in trying something unrelated to sex—or just trying less, period. These women were happily surprised by the pleasure perks of seemingly random life decisions. Let their stories inspire you to seek out your own alternative bedroom path—one that's not strewn with rose petals.

I fell in love with roller derby

"A scary, intense sport may not be most people's idea of an aphrodisiac, but it has made my sex life so much better. I started a couple of years ago, when I was looking for new ways to get in shape and tried a local roller derby training program for women. From the get-go, I was addicted.

Aside from the badass fun of it, derby is an amazing form of exercise. I go two or three times a week for a couple of hours. It has improved my endurance and strength, and holding a squat position during skating has given me a 'derby butt' that's rounder and more pronounced. I live in L.A., where waify models are on every corner and the standard of beauty feels unattainable. With derby, I've embraced my strong, womanly body and redefined my idea of sexy. It's paid off in bed.

After 12 years of marriage, with two kids and a full-time job, I suddenly had more interest in sex—and I was better at it. Now I last much longer and I'm more playful, something skating has brought out. I'm also less self-conscious than I used to be; getting all gross and sweaty is no biggie! Even my injuries help our sex life. I've torn my ACL and sprained my ankle, and to work around it we ended up trying different positions. I'm having the best sex of my life in my 40s."

We quit trying to make a baby

"My husband and I always had great sex. Once we started working on getting pregnant, however, something changed. Talking about your cycle isn't exactly foreplay. I got desperate and overly sensitive, too. In the morning, if I'd teasingly say to him, 'Wake up—it's go time!,' I'd feel bummed out if he was too tired or not in the mood.

We finally talked about it, and he admitted that he was having trouble dealing with the pressure. So I tried to make the situation less of a big deal. But we lived in a small place, and he could hear the crinkling sound of the ovulation-test wrapper. And I just couldn't help myself: My biological clock was ticking, so I felt like we had to conceive. After eight months of trying, there was this black cloud hanging over our relationship. We were both on edge, and we started having sex less often.

Meanwhile, we had a trip coming up to the Caribbean with friends. I wanted to enjoy cocktails on the back of a Jet Ski, not sit around sipping virgin daiquiris. So we decided to put our baby-making on hold for a couple of months, until we got back from the vacation. As it approached, we threw parties for friends, had game nights and ate cured meats until the cows came home. And we started having way more sex, with no end goal.

So, of course, what happened? I got pregnant a few weeks before we left for Barbados, and I'm pretty sure it was after one wine-fueled night. Once we let go of that pressure, we got our sex life back—and our beautiful girl, Lucy."

10 Ways to Boost Your Odds of Getting Pregnant

Next Page: I finally dealt with my pain problem [ pagebreak ]

Getty Images I finally dealt with my pain problem

"I'd had fibroids for at least 10 years, but they weren't an issue until right after my 40th birthday, when they grew and multiplied, basically having a party in my uterus. Not only were they uncomfortable to live with, they also messed with my hormones, making me feel like I had PMS to the 10th degree. My stomach got enormous, and I was busting out of my clothes. One of the hardest things to adjust to, though, was losing my libido. Sex didn't exacerbate the pain, but few things could stimulate me. Although my partner was really patient, we went for months without sex. We had always had really great chemistry, and it was upsetting to see our love life change so drastically.

I tried holistic medicine, nutritional therapy and even Reiki healing. Nothing worked. My doctor had told me that I could move forward with a relatively safe surgery or live with the fibroids until they shrank on their own when I went through menopause. I didn't want to go on like that. So last August, I got the procedure done. After a couple of months of recovery, all my clothes were fitting—and I felt so much healthier and sexier.

One night, my guy and I were watching a movie and cuddling when, out of nowhere, my libido flicked on. It had been so long since I had felt anything. Sex felt better than ever. For the last few months, we've had sex almost every chance we get. I now have these random bursts of desire. For example, recently, as I sat in traffic, I glanced at my phone and saw that he had a sexy new profile picture. I had to call him and tell him to hurry home so we could play! It was a tough few years, but I'm so glad I took my health into my own hands." 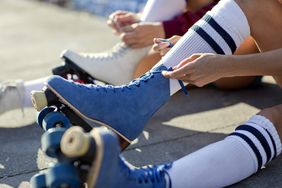