Guys Who Send Unsolicited Dick Pics Are Probably Narcissists, According to Research

Forget curing cancer and AIDS—researchers have focused their priorities on something that literally every woman already knows: Men who send unsolicited dick pics are self-involved jerks.

A new study in the Journal of Sex Research tackled the topic from a scientific perspective. Study authors surveyed more than 1,000 men and compared the personalities of guys who admitting to sending unsolicited photos of their genitals to women with men who did not do this.

The conclusion: Dick pic senders are more likely to be narcissistic and sexist. Surprised?

The Number One Thing Women Hate the Most About Sex

To understand what kind of person sends penis photos, the study authors asked the men who copped to messaging dick pics why they did this. Most of the guys said it was their way of getting the recipient to send sexually explicit photos sent to them in return. Some sent penis photos to satisfy their own sexual or personal needs.

The latter is a hallmark characteristic of a narcissist. "A narcissist is essentially somebody who is self-­obsessed to an extreme degree," Darrel Turner, PhD, a forensic psychologist in Louisiana, previously told Health. "This is someone who has a high level of confidence and belief in themselves, but to a very unhealthy and harmful extent—to the point at which it actually distorts their sense of reality about themselves, other people, and the world around them. It can also lead them into manipulative and exploitative behavior, because they will prioritize their own needs above anyone else's."

It's easy to laugh off or ignore guys who text or Air Drop unsolicited penis pictures to you. But here's where things get a little scary. More than 14% of the dick pic guys said that they hoped to elicit feelings of fear by sending photos, 10% did it to disgust the recipient, 8% sent them to make the recipient angry, and another 8% hoped to invoke a sense of shame.

"By sending unsolicited genital images, most men hoped to elicit sexual arousal in the recipient(s), though a minority hoped to elicit negative feelings," the study states. "In general, men who sent dick pics reported higher levels of narcissism as well as ambivalent and hostile sexism."

Good to know that the vast majority of senders—almost 83%—simply want the recipient to get turned on by a snap of their junk. If that's not romance, we don't know what is. 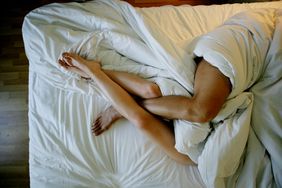