Certain phrases are more than likely to trigger a tantrum.

In the workplace, family, and romantic relationships, talking to a narcissist—someone who has an inflated (and immovable) sense of self-worth—is like tiptoeing through a minefield. Every word you utter has the potential to detonate the conversation into a full-on argument.

If you're trying to keep the peace (or just your own peace of mind), here's what to never say to a narcissist and the most likely way they will respond.

It's not you. (Really.) People who are narcissistic "are not good at regulating emotions, and do not manage frustration well," explains Ramani Durvasula, PhD, a licensed clinical psychologist and author of Should I Stay or Should I Go: Surviving a Relationship with a Narcissist. "They're more like 3-year-olds than adults; they don't tolerate any strong emotions well."

And like a tired, cranky 3-year-old, the end result is a massive (and unpleasant) tantrum. "Narcissists often control people through these tantrums because their rage can be so worrisome or downright frightening that everyone gives in to them," says Durvasula.

“I Wouldn’t Have Done It That Way”

Even if you're using this as a preface to constructive criticism, a narcissist will only hear that they didn't do something right and you could do it better. "And, [hearing] that threatens their sense of self-esteem twice," says Durvasula. "Anything that smacks of criticism and also lifts someone else into a positive light is intolerable to them."

A less loaded phrase to get your point across: "Let's work together to figure this out."

Narcissists do not do well with head-on confrontation, says Durvasula. And since they're bullies at heart, "they're scrappier and dirtier fighters than most of us," she warns. This doesn't mean that you have to hold your tongue.

Instead, try a gentler tack, such as, "I hear you, but I see it a little differently...."

“What’s the Matter With You?”

Ask the question as much as you want in your head, but resist the urge to blurt it out. "Narcissists have fragile self-esteem and never like being viewed as 'less than,' even though that's how they leave everyone else feeling," says Durvasula. And, let's be honest—asking this of anyone will put them on the defensive.

To try to figure out what the heck is unfolding in a narcissist's mind, "choose words that reflect understanding and a desire to understand how to help them," Durvasula says. For example: "It sounds like a lot is going on. Do you want to talk about it?"

"But you never saw that movie." "Uh, you were never at that party, remember?" While it seems normal, even necessary, to call someone out for spinning the truth, resist the urge to directly accuse a narcissist of not getting something right—especially when others are around. "If a narcissist feels that their 'brand' is being sullied in public, they'll get enraged," explains Durvasula.

Instead, let others privately know that they're not hearing accurate facts.

"Because narcissists are preoccupied with maintaining an inflated sense of self, they're constantly on guard against anything that might deflate them," explains Joseph Burgo, PhD, a psychotherapist and author of The Narcissist You Know: Defending Yourself Against Extreme Narcissists in an All-About-Me World. "Narcissists don't care about the truth," says Burgo. "The only thing that matters to them is 'winning.'"

Even if you have hard evidence that supports your position and present it in a sensitive and reasonable manner, a narcissist will take it as a full-on personal attack. "And if you continue arguing your POV, they will escalate their attacks in an attempt to annihilate you," says Burgo.

So How Should You Deal With a Narcissist?

No matter how lightly you tread, keep in mind that it won't make a difference. "Narcissists rarely change," says Durvasula. "Narcissism is a lifelong personality trait and generally gets worse with age."

For your own sanity, distance yourself and manage your expectations. In other words, "stop waiting for empathy that will never come, for [the] respect they will never offer, for consideration and compromise they will never bring," Durvasula says. "We break our hearts and spirits in these relationships because we keep holding out hope for a 'someday better.'

It's not coming and you can waste your life, mental health, and career waiting for it to happen. "

If cutting ties with a narcissist in your life isn't possible, be clear in your communication, put things in writing to protect yourself down the road, and "expect that things will still be used against you," warns Durvasula.

Then foster other, healthy relationships with friends, family, and co-workers who can support you.

How To Recognize Narcissistic Abuse Syndrome
Was this page helpful? 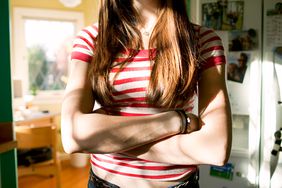