health's editorial guidelines
Medically reviewed by
Jonathan B. Jassey, DO

You're on a date and the person is clearly smitten. They tell you it's clear you've been brought together by the universe for a reason. They can see having children with you. And oh, wouldn't it be great to hop on a plane and go on that bucket-list trip together soon? Like next week?

No, you're not on an episode of The Bachelor or Bachelorette. This is real life. But this is just your first or second date. How could they have such a clear vision of your future together? You basically just met!

Could this person be "future faking" you? Here's everything you need to know about this "dating strategy," why it's a sign you could be seeing a narcissist, and how to avoid becoming a victim.

What Is Future Faking?

"Future faking is when someone uses a detailed vision of the future to facilitate the bonding and connection in a romantic relationship," Greg Kushnick, PsyD, a psychologist based in New York City, told Health. It's generally something narcissists do, added Dr. Kushnick; it's their way of getting your attention and admiration.

On the outside, future faking might seem like you're experiencing the meet-cute of a romantic comedy. "It's a charming, magnetic, oxygen-fueled experience," Dan Sokal, LCSW, a licensed psychotherapist and trained psychoanalyst in New York City, told Health.

The 3 Types of Narcissism—And Why You Need to Know the Differences, According to Experts

"In most situations, it's not intentional," said Dr. Kushnick. "Many narcissists are very impulsive when it comes to having romantic feelings. And in that impulsivity, they promise someone the world." That said, narcissism exists on a spectrum. People who fall into the "malignant narcissist" category can have premeditated motives, explained Dr. Kushnick.

So you can't assume the other person is acting maliciously and trying to fool you; "They actually believe what they're saying to you to be true during the initial courting period. Until they don't," said Dr. Kushnick.

If you're on the receiving end of future faking, you can suffer emotionally. Because even if it's not intentional, the result is that the relationship tends to blow up in painful ways.

When To Expect Future Faking

If you begin to pull away, question things, or try to slow down the trajectory, the narcissistic partner will start to show disapproval or become dismissive. "There's a coldness that sets in, and that's when things start to change," said Dr. Kushnick.

That's a problem because a narcissist doesn't consider how their actions impact others—they don't care if the spectacular future they say they want with the other person falls apart and ends up causing deep pain.

Once a narcissist gets past the first stages of the relationship, said Sokal, it can feel as if they're coming down from a high. That's when they tend to turn hostile.

"In a way, it's to recalibrate and protect their sense of self and ego," said Sokal. Creating a vision of perfection is the only way they know how to attach, and once that image is cracked after you start to question things or pull away, the façade crumbles.

A narcissistic partner who is future faking will eventually push their partner away and won't deliver on their promises. You aren't taking a romantic vacation in Paris. They're not going to propose under the Eiffel Tower.

"They start to substitute compliments and acts of love with criticism and emotional distance," said Dr. Kushnick. Just as fast as the relationship started, so, too, can it end. You may suddenly get blocked on social media—and generally have no idea why.

It's so easy in the early stages of the relationship to get wrapped up in someone else. The sun really does seem to be shining brighter, and the birds really are singing louder, you know? "Love and future faking might initially look the same," said Dr. Kushnick. Here's how to tell them apart—so you can take a step back and reassess the relationship:

The Other Person Is Moving Way Too Fast

It's one thing to daydream with your partner about taking them to Greece because you loved it there—a sort of "wouldn't it be great if I could show you around?" chat. It's another thing for someone to say "I love you" on the first date, after the first week, or suggest you marry. It's all too quick for comfort.

"A relationship is slow steps that build into one another. There's give-and-take," said Sokal. "Future faking throws things into hyperdrive and is blinding and almost like a gaslighting of romance. It takes reality and turns it into a cliché."

The narcissistic partner might express that something about your relationship or meeting is mystical. "They talk about the bewitchment of a relationship and might say that they've never had anything like this before," said Sokal. "They paint a Norman Rockwell image without reality."

If you two were to get into an argument, would they take responsibility for their actions and apologize? A narcissist will put the blame on you. "They see things with black and white thinking or a right versus wrong way," said Dr. Kushnick. "If they tend to blame the world or other people for their problems, consider that you're on a path to a painful ending."

Love is thrilling, but it also honors your pre-relationship life. There's excitement in romance and love, but if it means abandoning your life prior, that's a red flag, said Sokal. Your partner should never try to convince you to leave your job, stop seeing family or friends, or move in with them abruptly.

Can a Future Faker Change?

On the shallower end of the narcissism spectrum, a narcissist might be self-centered and egotistical, and a commitment to therapy can help. But for someone who has a narcissistic personality disorder, for example, the road is much more challenging.

"I like to say that there aren't that many former narcissists," said Dr. Kushnick. "It's hard work to bring them to a place to see how their actions impact people and get them to show empathy for the emotional world of another person."

If You Think You've Been Future Faked

The first step is to know what it is and be able to identify it. If you recognize these signs of future faking in your partner and feel the ramifications, including a loss of happiness and joy or depression, it's a good idea to leave the relationship, even if it causes pain and anger. Better to cut things off sooner rather than later.

"Love takes work, but it does not require an entire sacrifice of one's self," added Sokal.

10 Things To Know From Those Who Have Attempted Suicide
Why Do People Ghost? Relationship Experts Weigh In 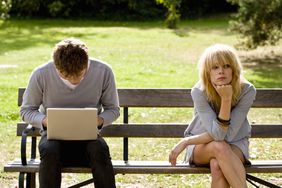