Could this sexual orientation apply to you? Here's how to know.

Ever take one look at someone and suddenly feel completely smitten—maybe it's their eyes or smile, or just the adorable way their hair falls in front of their eyes? Or you find yourself physically close to another person, and something about their touch or kiss makes your pulse pound with sexual chemistry?

Most of us have experienced this kind of instant, almost primal attraction. But a small number of people never have; they're incapable of it. To be attracted to someone, they need to develop a mental or emotional connection to the other person, not a physical one.

That's a demisexual in a nutshell.

A demisexual is someone who is hardwired to seek an intense, solid, securely attached relationship before they can even think about sexual intimacy, Holly Richmond, PhD, a sex therapist in Southern California, tells Health. For a demisexual, intimacy is on a platonic level—at first. Sexual attraction develops as the relationship deepens.

“A demisexual is not going to walk down the street, see a hot guy, and think, I want to sleep with that person,” Richmond says. Celeb crushes, romcom flicks, love (or lust) at first sight? None of this resonates with a demi. “it just doesn’t make sense to them,” she adds.

Being Skoliosexual Is Legit and It Has Nothing to Do With Your Spine. A Sexologist Explains

A relationship for a demisexual typically starts as a friendship and may blossom into something more. Sex is still important; there's nothing wrong with their sex drive. But what turns them on has to do with brains and personality rather than a toned physique. “They really need to know someone to feel sexually attracted to them,” Dr.Richmond affirms.

How would you know if you're a true demisexual, rather than a person who just isn't into hooking up or getting sexual with someone early on? Think about how your romantic and sexual relationships have started. If it took time to get to a place where you felt chemistry, and the lead up to becoming a couple involved lots of talking and platonic time together, you might be a demi.

It's hard to know how many people are demisexual, especially since the term has only recently entered the lexicon. But Richmond believes that in the past three years, more people are using the word to describe their own sexual orientation. It's similar to the recent uptick of people who identify as asexual (feeling no sexual attraction at all to anyone).

Yet just like those who identify as asexual, people who are demisexual can still develop serious, fulfilling, long-term relationships with others. They just get to that place in a different way that doesn't rely on physical chemistry.

What’s the Difference Between Asexual and Aromantic? We Called in the Experts
Was this page helpful?

Code-Switching: What Does It Mean and Why Do People Do It?
23 LGBTQ+ Pride Flags and What They Represent 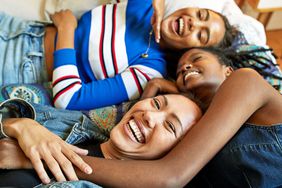