My Incontinence Started After I Gave Birth

Karen Sebastian, age 50, started experiencing incontinence after the birth of her first child. Sebastian, who lives in Honolulu, found that physical therapy helped her symptoms. At the time, she was studying to become a physical therapist herself, and the experience made her decide she wanted to specialize in urinary incontinence. Now she helps others who have similar problems, and is the creator and producer of an exercise and lifestyle video The Bladder Cure.

Courtesy of Karen SebastianYou don't really wake up one day and have overactive bladder or incontinence. It happens over time, and you get used to it. It is kind of like someone having a shoulder or knee problem. They just tolerate it and compensate for it, until it really becomes a problem or interferes with their life.

I had incontinence after my first child was born. I went to a physical therapist, who helped me resolve my symptoms by controlling my bladder. I was just starting work as a physical therapist at that time as well. This experience heightened my awareness and interest in this issue.

Then, later on, when I was in my mid-40s, I began experiencing overactive bladder. I was going to the bathroom every 30 minutes to an hour but didn't initially think much about it.

My bladder problems became most apparent to me when I went out. I was the person in the group who was always running to the bathroom. You start comparing socially and notice that something isn't right.

My problem worsened as my caffeine consumption and anxiety increased. It was a period of a lot of stress for me. I was balancing kids, caring for aging parents, and working. I found that I was getting the urge to go all of the time. When I started investigating, I realized that anxiety and overloading your system with caffeine can trigger the bladder to spasm.

The approach I took to recovery was to make lifestyle changes. I started minding my caffeine intake and making myself wait even if I felt I had to go, in order to train my body. I started doing yoga and meditation for relaxation. I also again began performing pelvic floor exercises (or tightening and holding the muscles in the pelvic floor), which support the uterus, bladder, and bowel.

Hormones are another cause of bladder problems. New moms and women between 40 and 50 can get overactive bladder because that's when we experience hormonal changes and our muscles become less firm. Exercising the pelvic floor muscles—especially during the 40-to-50 age range—really helps people as they get older. If you let it go, it only gets worse and harder to correct.

I have worked with seniors much of my career and have become aware of how prevalent incontinence is in the older population. I realized I didn't want to be like that. After talking to and seeing lots of women with this problem during my career, I understood what a big issue it is. All of these things combined propelled me to create The Bladder Cure DVD to help others.

Many people have all of these misconceptions about overactive bladder, and they don't ask for help. They are afraid they are going to have to take drugs or be told they have to have surgery. But I think pelvic floor exercises and lifestyle changes are the best way to start dealing with it. 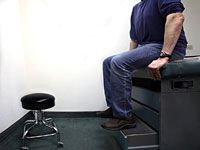 My Incontinence Was Initially Diagnosed as Enlarged Prostate

How to Train Your Bladder to Reduce Bathroom Trips