The Culture of Cuisine: Diet Tricks I Learned in Morocco

How huge a role does culture play in diet? Turns out society's eating habits may be the culprits behind expanding waistlines.


By Shaun Chavis
Follow me on Twitter
How huge a role does culture play in diet? We've all seen the stats about how the U.S. has a higher percentage of obese people (more than 30% of adults, according to the Centers for Disease Control and Prevention) than countries like Japan, France, and Italy. Breaking it down even further, the Trust for America's Health released a new report on obesity in America, and the South remains the fattest part of the country. (Mississippi has the highest obesity rate, followed by Alabama, where some of Health's offices are located.)

Traditional Southern fare includes fried foods (like fried green tomatoes, fish, and chicken), banana pudding, and sweet tea. In some families, there is also a culture that encourages overeating: For example, the idea that a man is more manly if he eats plenty—or that you're not "healthy" if you don't clean your plate. These eating habits may be the culprits behind expanding waistlines.

But that's not the whole picture, as Time magazine acknowledged in its article, "Why Are Southerners So Fat?" Not every meal in the South comes from a deep fryer. In fact, for many Southerners, gardening and canning have always put veggies and fruit on the table, and new Southern cooking gives a bigger role to beautiful, fresh produce. Poverty plays a role in the South's obesity picture, as does a lack of public transportation and city planning that makes it inconvenient or difficult to walk or cycle around town. The abundance of fast-food restaurants and frequency with which Americans eat out means meals in big portions and big calorie counts. A recent study showed that a greater number of fast-food restaurants and convenience stores in your neighborhood may sabotage your diet.

Since our food culture isn't proving to be healthy, perhaps we should imitate other cultures' habits. One of food writer Michael Pollan's mantras is to "Eat more like the French" or simply pick a traditional food culture as your guideline. The Jungle Effect proposes the same idea, as does the Mediterranean diet.

However, there's more to it than just restacking your personal food pyramid with different menus—there's a culture of how to approach food too. For example, there appears to be some correlation between obesity and the time people take to eat: The faster, the fatter. Cultures with leisurely meals tend to have leaner populations.

Years ago, I spent three weeks with a family in Morocco (my then in-laws). Knowing there was already buzz about the Mediterranean diet, I paid attention to our meals. Here are a few of my favorite diet strategies that I picked up while sitting at a Moroccan dinner table.

Start with a salad
Both lunch and dinner started with multiple salads, and it wasn't unusual to have three different salads on the table at a time. But few were dressed with vinaigrette, and there wasn't a bottle of ranch in sight. Instead, many salads used the juices from roasted vegetables, citrus or vinegar, and spices to add flavor. Sometimes there was a simple cucumber-tomato-red onion salad with red-wine vinegar and a little olive oil. One of my favorites was a roasted bell pepper salad (similar to this Cooking Light recipe), seasoned with lemon juice or vinegar, the juices from the peppers, and cumin. Another: zaalouk, a roasted tomato and eggplant salad, flavored with the natural juices from the veggies. (Also try this Orange and Olive Salad and this Carrot Salad. Some of my favorite Mediterranean cookbooks are by Paula Wolfert, Kitty Morse, and Nancy Harmon Jenkins.)

Finish with fruit
Dinner ended with a big bowl of fruit on the table. (Or, maybe I should say that dinner ended with a big empty bowl of fruit.) Sometimes we had grapes, sometimes figs, and a few nights we had prickly pears. There was enough for everyone to have two pieces or servings of fruit, at least. Even in America, I noticed Moroccan moms putting huge bowls of cubed melon on the table after dinner, and the kids clean it up.

Keep sweets small
Living in the South, I know we can drink sweet tea by the quart. Moroccan mint tea has enough sugar to rival Southern sweet tea, but it's served in small glasses that hold about 2 ounces. There's no guzzling syrup. Most desserts I had were small cookies.

Forget kid foods
No fish sticks, no chicken fingers, no hot dogs. The children ate the same food the adults ate, from the same communal plate. I can't explain how Moroccan parents did it, but it's likely the children I met rarely saw a breaded nugget of anything. Several families told me they thought canned and frozen food was unhealthy, and the family I stayed with expressed a clear preference for home cooking. They considered it poor hospitality to take someone out to a restaurant. (As for other types of kid food, there was one McDonald's in town. I didn't go, but I heard they served sardines.) The culture of having a meal together may play a role; at least one recent study shows regular family meals can help teens develop better eating habits.

Got any healthy or diet-friendly eating habits you've taken from a specific culture? Please share. 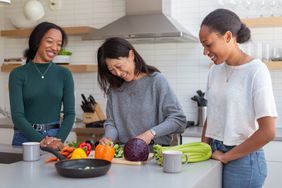