Whether you love wine, beer, or fancy mixed drinks, here's a quick guide to the low-calorie options you can order (or make at home).

It's more than understandable to want to kick back with a drink at the end of a long day. While there's no shame in that game, it's easy to forget the liquid calories you're sipping.

A calorie is a unit of energy that comes from food and drinks, according to Nemours Children's Health. If you are keeping track of the calories in your diet, you might want to consider low-calorie alcoholic beverages.

The lowest-calorie alcohol is vodka, which only has 100 calories in a 50-millimeter shot. Other alcohols among those with the lowest calories are whisky, gin, and tequila, which all have about 110 calories per shot.

According to the Academy of Nutrition and Dietetics, alcohol is basically empty calories. "Calories from alcohol can add up fast," Christy Brissette, MS, RD, owner of 80 Twenty Nutrition, said. "And, because alcohol doesn't provide nutrients or fill you up, these calories are usually in addition to what you're already eating and drinking." Drinking also can make you feel less inhibited, so you're more likely to overeat, Brissette said.

While some forms of alcohol contain a fair number of calories on their own (looking at you, triple sec), a big issue in all of this is mixers, Keri Gans, MS, RD, author of The Small Change Diet, said. "Many of the mixers we add to alcoholic drinks are high in sugar and provide no nutritional benefit," Gans said.

The good news is you don't need to swap your chardonnay for seltzer every time you want to celebrate.

"To cut calories in most drinks, you can play with the ratios of ingredients," Beth Warren, MS, RD, founder of Beth Warren Nutrition and author of Secrets of a Kosher Girl, said. Warren recommended these tricks:

With that in mind, these are some of the lowest-calorie alcoholic drinks you can serve up, including easy tweaks to some popular favorites.

Margaritas can be calorie bombs thanks to lots of sugar and triple sec. Pre-made mixers can also be an issue due to high sugar content, Brissette said. To get around that, Brissette recommended using fresh lime juice, tequila, and a dash of agave syrup on the rocks. "You'll keep the sugar and calories down," Brissette said.

A gin and tonic is a classic combination, but it can pack a lot of calories. Why? Tonic water is generally made with high-fructose corn syrup, the same sweetener that's found in cola—and a 12-ounce can of tonic contains eight teaspoons of added sugar, Sass said.

Enter seltzer. "Adding seltzer to a cocktail is always a great choice since it provides zero calories and zero grams of sugar," Gans said. A gin and seltzer lets you get that same bubbly feel and gin taste without all the added calories.

Yes, small amounts of alcohol, including red wine, can be a part of a low-calorie lifestyle. But are you sabotaging yourself with a heavy-handed pour? It's all too easy and common to consume too much, Sass said.

But sticking with the proper serving size—five ounces—and having just one glass of wine in a sitting will help keep calories down. "It's a good choice in terms of calories," Warren said.

Pro tip, per Brissette: Go for drier varietals like sangiovese, cabernet sauvignon and pinot noir. These tend to be lower in sugar and calories, Brissette pointed out.

Like wine, portions matter here, Gans said. "A classic vodka or gin martini is around 120 calories—however, that is if only a single shot of alcohol is included and around 1/3 of an ounce of vermouth."

While martinis are notoriously strong, Brissette said that could be a good thing when it comes to calories.

"Sipping on such a strong cocktail probably means you'll drink it more slowly than a sweeter drink made with juice or syrup," Brissette said. If you want a little flavor in the mix, Brissette recommended adding a twist of lemon to infuse a citrusy taste or making your drink dirty with a splash of olive juice—it only adds about five calories.

Is rum and Coke your go-to drink? According to MedlinePlus, eight ounces of rum mixed with Diet Coke has a lower calorie count than its counterpart.

If you want to amp up the taste without adding a ton of calories, you could always add a squeeze of fresh lime juice to your glass as well.

A chilled white wine can be refreshing, but pick the type you sip on carefully. Dry white wines, such as sauvignon blanc or pinot grigio, tend to have lower sugar content, which translates to fewer calories, Suss said. Sweeter varieties like Riesling could have more calories.

And, again, serving size matters. You want to strive for five ounces which, Gans pointed out, is "a smaller pour than most of us do."

Beer is often considered the ultimate bloat-bringer, but it may not be that bad. "Beers contain several B vitamins," explained Sass. "A 12-ounce beer also packs more calcium, magnesium, and selenium, which is a key antioxidant, than a serving of wine."

Many beers don't list calories on their labels, so Brissette recommended trying this hack: "Look for a beer that has an alcohol by volume of four, and you'll be getting about 100 calories for a 12-ounce (serving)."

A vodka soda may be your healthiest choice if you're in the mood for hard alcohol. When you combine a shot of vodka with seltzer, you skirt excess calories—and a nasty hangover.

"Soda water or club soda is calorie-free since it's just bubbly water," Sass said. "It's also a good cocktail mixer because it hydrates and contains no added sugars or artificial sweeteners. Plus, the bubbles may slow you down, so you don't slam the drink."

The rules of picking out a lower-calorie champagne are the same as they are for wine.

"When choosing your champagne, know that 'dry' means less sugar and calories," Brissette said. You can also look for "brut" on the label, which is French for unsweetened or dry.

A mojito combines muddled mint leaves, rum, soda water, and sugar. You want to strive for a six-ounce serving with this one.

Gans said it might be bigger if you get your mojito from a restaurant or bar. Also, scaling back on how much sugar you use or swapping in a sweetener for regular sugar can help cut back on calories, according to the Harvard School of Public Health.

Think of a Paloma as the grapefruit lover's alternative to a margarita. It features tequila, grapefruit juice, lime juice, and soda water for a margarita-style taste.

"This refreshing drink is a lighter alternative to a margarita which is typically made with plenty of agave and/or plenty of sugar-sweetened bar lime," Brissette said. Use fresh grapefruit juice instead of bottled to save on calories.

If you are keeping track of the calories in your diet, you may need to make a few adjustments with the amount of ice, type of sweetener, or kind of mixer in your alcoholic beverages to reduce the calories. Otherwise, drinks like wine, champagne, and light beer will do the trick to keeping the calories down.

If you enjoy going to brunch, mimosas may be on the menu. Mimosas typically come with two ingredients: orange juice and sparkling wine or champagne.

Depending on how it's made, four ounces of a mimosa is less than 100 calories, per MedlinePlus. So you might want to opt for a low-calorie orange juice or wine and champagne options that are less sweet. 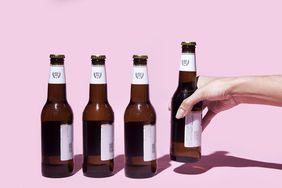 7 Ways to Keep Alcohol From Wrecking Your Diet 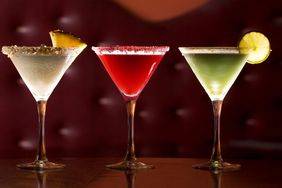 8 Healthy(ish) Cocktails for Your Holiday Parties 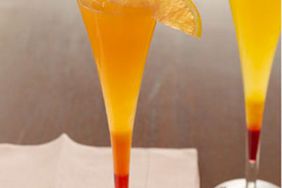