What to know before you dive into that deli sandwich or holiday meal.

For many of my clients, ham is not only a frequent sandwich or omelet ingredient but also a holiday staple. Occasionally I'm asked if it's just as healthy as poultry, and my answer is, well, no. That's primarily because ham—which is made by curing pork leg—is a type of processed red meat. Surprised? Read on to learn more about the health effects of this pork product, and the best ways to eat it if it's one of your can't-live-without foods.

Most ham in the US is cured, which is a process where salt (or potassium nitrate), nitrites, and sometimes sugar, seasonings, phosphates, and other compounds are used to preserve meat. While this process reduces bacterial growth and enhances the pork's flavor, it also changes the nutritional content and classifies ham as a processed meat.

Three ounces of cooked ham with the fat and bone removed contains 104.4 calories, 3.72 grams of fat, 16.2 grams of protein and less than one gram of carbohydrates. The same amount also has 966 milligrams of sodium, which is over 42% of your daily value (DV).

Ham has a few standout nutrients, including 21.3 micrograms (39% of your DV) of selenium, which plays an important role in reproduction, thyroid function, and protecting cells from damage and infections. Additionally, ham is a good source of thiamin with 0.42 milligrams (35% of your DV), which helps cells convert carbs into energy.

However, the ultimate reason ham isn't great for your health is because of its classification as both a red meat and processed meat, and both are known to cause the following adverse health effects.

Ham may increase the risk of cancer

Processed meats like ham are classified by the International Agency for Cancer Research (IACR) as carcinogenic to humans, meaning that sufficient evidence indicates they cause colorectal cancer the organizations says. On the other hand, the IACR classifies red meats specifically as "probable carcinogens" since they have been associated with an increase in colorectal, pancreatic, and prostate cancer.

The American Institute of Cancer Research (AICR) and World Cancer Research Fund echo this sentiment stating, "there is strong evidence that eating red or processed meat are both causes of colorectal cancer." In fact, research has found that consuming even small amounts of processed red meats like ham on a regular basis increases the risk of colorectal cancer, according to the AICR. That risk goes up proportionally with portion sizes.

While researchers aren't completely clear on why processed red meat poses a cancer risk, there are a few theories. For one, smoking and cooking meats at high temperatures increases DNA-harming substances that could lead to cancer. Studies also suggest that the nitrates and nitrites added during the curing process form cancer-causing compounds in humans.

Ham may boost the risk of heart disease

For example, a 2020 study published in BMJ analyzed the diets of 43,272 men and linked eating processed and/or unprocessed red meat to an increased risk of coronary heart disease. This appears to be true in women, too. A study published that same year in the Journal of the American Heart Association found that of 105,521 postmenopausal women, those who ate red meat had a higher risk of dying from cardiovascular disease.

One potential explanation for the link: Red meat contains saturated fat, which can raise "bad" LDL cholesterol levels—a risk factor of heart disease, according to the American Heart Association.

Another possibility is that eating red meat may increase blood levels of trimethylamine N-oxide (TMAO), a chemical related to heart disease. Those who eat red meat appear to have triple the amount of TMAO in their blood compared to people who stick to white meat or consume no meat, according to a 2019 study cited by the National Institutes of Health.

Finally, one serving of ham has almost half the daily recommended intake of sodium, and a high sodium diet is known to raise the risk of high blood pressure, heart disease, and stroke.

Ham may raise the risk of other chronic diseases

Apart from cancer and heart disease, a higher consumption of processed red meat has been found to heighten the risk of other chronic conditions, such as:

With this in mind, it may not be a surprise that a nationwide study published in 2021 in Nutrition found that the less money spent on processed red meat in a county, the greater the average life expectancy in that county.

Ham takes a toll on the environment

Ham and other red meats are one of the most environmentally damaging foods. Raising livestock contributes to 14.5% of global greenhouse gas emissions, according to the United Nations. Livestock also require large amounts water and land—leading to deforestation.

While this may not seem directly related to your health, environmental health and public health are closely linked. According to the CDC, environmental degradation increases the spread of infectious diseases, water-borne illnesses, and respiratory and cardiovascular disease. In other words, cutting back on your ham consumption can not only help the climate, but your long-term health, too.

While ham increases the risk of conditions like cancer and heart disease, the truth is that no single food can make or break your health. In fact, how often you eat a food is also an important factor when it comes to a healthy diet. So if you just can't stomach the idea of saying goodbye to ham forever, consider reserving it for special occasions, suggests the AICR.

When you do consume ham, pair it with foods linked to disease prevention like vegetables, fruits, whole grains, and pulses (i.e. beans and lentils.). You can also swap some of your deli meat with fresh poultry, fish, or plant-based high-protein alternatives, such as beans and hummus. 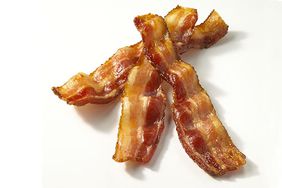 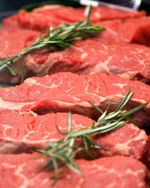