These are the top nutritional benefits of brown rice to keep in mind.

As a nutritionist, many of my clients tell me they've heard they should choose brown rice over white rice. Indeed, brown rice is a nutrient-rich source of energizing carbs that's widely considered the more healthful option. But why is that the case? Here's what you should know about brown rice, including its nutritional value; health benefits; and ways to incorporate it into meals, snacks, and even desserts.

Brown rice is a whole grain. A grain is considered to be 'whole' if its three original parts—the bran, germ, and endosperm—stay intact. A grain's bran is its fibrous outer skin. The germ is its embryo, which has the potential to sprout into a new plant. The endosperm is the germ's starchy food supply.

Since brown rice keeps all of the original parts, it provides more than twice as much ﬁber compared to its white counterpart. That's because white rice is not a whole grain; it's refined, meaning the bran and germ are stripped away, leaving only the endosperm. As a whole grain, brown rice also packs higher levels of essential nutrients.

Is White Rice Healthy? Here's What a Nutritionist Says

One cup of cooked long-grain brown rice contains 248 calories, 5.5 grams of protein, 52 grams of carbohydrate with 3 grams as fiber, and less than 2 grams of fat, according to the US Department of Agriculture database. Brown rice is also naturally rich in vitamins and minerals. That same portion, about the size of a tennis ball, packs 88% of the daily need for manganese, a mineral needed for immune function, collagen production, and strong bones, and over 20% of the daily need for magnesium, required for muscle and nerve function, DNA production, and regulation of blood sugar and blood pressure. Cooked brown rice also supplies between 10% and 27% of the daily goal for selenium, copper, phosphorus, and several B vitamins, other essential nutrients needed for optimal health.

This hearty whole grain is also bursting with health-protective antioxidants. A 2018 study published in the journal Antioxidants concluded that brown rice contains many types of phenolic compounds. This common antioxidant group is known to protect cells against damage linked to a greater risk of type 2 diabetes, obesity, cancer, and heart disease.

Eating brown rice has been shown to result in better post-meal blood sugar control in people with diabetes and may even help prevent type 2 diabetes. Several studies have also found that replacing white rice with brown rice can reduce the risk of type 2 diabetes. The effects are attributed to the grain's fiber, slow-burning starch, nutrients, and antioxidants, as well as its ability to help feed beneficial bacteria in the gut, such as Lactobacillus and Bifidobacterium, which are tied to diabetes and obesity prevention.

8 Awesome Whole Grains You're Not Eating

In one study, scientists looked at the effect of brown rice consumption on inflammatory markers and heart risk factors in 40 non-menopausal women who were overweight or obese. The volunteers were asked to consume about 5 ounces of either cooked brown or white rice for six weeks, with a two-week wash out period before switching to the other rice type. Researchers found that that the consumption of brown rice significantly reduced inflammatory markers, including C-reactive protein, as well as other heart risk factors. Another study in healthy female university students found that eating brown rice as a staple for 10 weeks improved general health and prevented high cholesterol, which reduces overall heart disease risk.

In addition to cardiovascular protection, the aforementioned study on inflammatory markers also found that brown rice consumption improved weight, body mass index, and waist measurements among the women in the study. Other research has shown that brown rice may help stave off weight gain. A 2019 study among Japanese workers concluded that over the course of one year, white rice eaters gained over six pounds while brown rice eaters did not gain weight. Further studies show that whole grains, including brown rice, reduce calorie absorption due to their fiber content and improve calorie burning, two additional factors that positively impact weight management.

One concern about brown rice consumption is levels of arsenic, a contaminant linked to potential health risks, including adverse pregnancy outcomes and certain cancers. But arsenic risks due to rice consumption of any kind are difficult to assess, according to a study published in Current Environmental Health Reports. Researchers point out that the association between rice consumption and health outcomes is complicated by several factors. These include populations with differing rice consumption patterns relative to their total caloric intake and widely varying amounts of arsenic in water used to cook rice, which makes the risk from rice itself difficult to tease out.

Currently, consuming brown rice in moderation, as one of several sources of whole food carbohydrates, is one way to reduce possible arsenic exposure. A 2021 study found that partially boiling brown rice can remove up to 54% of unwanted heavy metals like arsenic. This method outperforming soaking or rinsing and was also shown to help preserve nutrients such as zinc.

Is Chipotle Healthy? Here's What a Nutritionist Says

Brown rice is incredibly versatile and can be incorporated into nearly any meal. To make a breakfast porridge, flavor the rice with plant-based milk and a touch of maple syrup and cinnamon, and then top with nuts. Add veggies and brown rice to omelets and frittatas. Add brown rice to soups, chili, jambalaya, tacos, and casseroles. Incorporate it into salads or grain bowls, along with leafy greens, other veggies, and lean protein, drizzled with sauces like seasoned tahini, vegan pesto, or guacamole. Serve brown rice with stir fries, and opt for brown rice sushi. Incorporate it into veggie burgers, stuffed cabbage and bell peppers, and lettuce wraps. Brown rice can also make its way into desserts, including pudding, toasted brown rice ice cream, cookies, and bars.

Other forms of the grain are also readily available. Add puffed brown rice to dark chocolate and other sweet treats, and swap wheat flour for brown rice flour in baking and cooking. Plain sprouted brown rice protein powder is a great option for smoothies or to bolster the protein content of pancakes, mashed cauliflower, or blended soups. Here are a few of the brown rice-based items I enjoy:

Brown rice is a filling, nutrient-rich whole grain that's naturally gluten-free and versatile. If you're trying to decide between white and brown rice, consider reaching for the brown to up your intake of fiber, vitamins, minerals, and antioxidants and to potentially reduce disease risk. In my experience, many people end up developing a preference for brown rice over white due to its slightly nutty flavor and hearty texture. Just keep in mind that, like any food, you can't eat unlimited amounts. Combine moderate portions of brown rice with other whole foods to take advantage of its benefits and best optimize your overall nutrient and calorie intake. 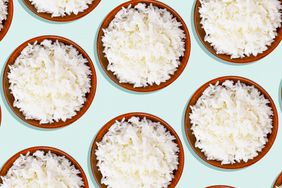