This powerhouse berry is in season, and there's so many ways you can add it to your meals and snacks.

Often referred to as the king of antioxidants, blueberries are a powerhouse fruit with impressive wellness benefits, and they’re in season now. Here are five ways blueberries help protect your health, easy ways to incorporate them into meals, snacks, and drinks, and why you should enjoy them year-round.

One cup of fresh blueberries contains 85 calories, 1 gram of protein, no fat, and about 20 grams of carbohydrate, with roughly 4 grams as fiber. That same portion also packs over four ounces of water, and nearly a quarter of the daily minimum target for immune- and skin-supporting vitamin C. They also provide over a third of the daily goal for bone-supporting vitamin K, and a quarter for manganese. The latter nutrient also helps maintain strong bones, in addition to promoting collagen production for healthy skin and joints.

8 Health Benefits of Watermelon, According to a Nutritionist

Research shows that among commonly consumed fruits and vegetables, blueberries rank as one of the highest in antioxidant activity.

The antioxidants in blueberries have been shown to curb inflammation and reduce oxidative stress. The latter occurs when there is an imbalance between the production of cell-damaging free radicals and the body's ability to counter their harmful effects. For this reason, blueberries are tied to fending off DNA damage and aging, and lowering the risk of several chronic diseases, including obesity, cancer, and type 2 diabetes.

A 2018 study, published in the International Journal of Molecular Sciences, concludes that blueberries may be one of the best functional fruits, due to the protective activity of their anthocyanin and polyphenol antioxidants.

According to the CDC, heart disease remains the top killer of both men and women in the US, and blueberries may offer some potent protection. Due to their ability to reduce inflammation and oxidative stress, blueberries protect against artery hardening, a condition that ups the risk of heart attack and stroke.

One recent study in men with metabolic syndrome compared the effects of consuming one cup of blueberries per day to a placebo over the course of six months. The blueberry eaters experienced sustained improvements in artery function, including reduced stiffness, as well as positive changes in cholesterol profiles. The results led scientists to conclude that blueberries should be included in dietary strategies to reduce heart disease risk.

A 2019 analysis of 11 previously published studies examined the relationship between blueberries and cognitive performance. The review found that blueberries have been shown to improve delayed memory and executive function in children. The fruit also protects delayed memory, executive function, and psychomotor function in older healthy adults, and adults with mild cognitive impairment.

Delayed memory deals with long-term retention and the ability to recall information; executive function involves skills that enable a person to plan, focus attention, and juggle multiple tasks. Psychomotor function has to do with the body brain working together, such as hand eye coordination.

Berries are also the only fruit singled out in the MIND Diet, which combines aspects of the Mediterranean diet and the DASH diet to create an eating plan focused on brain health, specifically the prevention of dementia and age-related cognitive decline. In one 20-year study of over 16,000 older adults, those who ate the most blueberries and strawberries experienced the slowest rates of cognitive decline.

The wear and tear put on muscles during exercise triggers exercise-induced muscle damage, or EIMD. The effect can result in increased muscle soreness, reduced muscle force, and hindered athletic performance. However, what athletes eat before and/or after exercise can potentially offset EIMD. In one study, female athletes consumed either a blueberry smoothie or a placebo drink of a similar antioxidant capacity five and 10 hours before, and then immediately, 12, and 36 hours after EIMD, which was induced by strenuous strength training.

Researchers found a faster rate of muscle strength recovery in the blueberry intervention group. The outcome led the scientists to conclude that blueberry consumption triggers adaptive events in the body that accelerate muscle repair.

Blueberries are so protective, they deserve a place in your diet even when they’re out of season. To enjoy them during all 12 months of the year, you can freeze fresh blueberries or buy frozen bags with no added ingredients. If you have a bounty of fresh berries from your local farmer’s market or store, freeze what you can’t eat.

Here's how to freeze them: Wash the berries and place them in a single layer on a baking sheet so they don’t touch and clump together. Freeze for 30 minutes, remove, and then transfer to freezer bags. Remove as much of the air as possible, seal, label, and freeze. Your stash will keep for about six months. Add frozen blueberries to smoothies, or thaw in the refrigerator to add to anything from oatmeal to garden salads.

How to eat more blueberries

Toss slightly mashed blueberries into flat or sparkling water, along with fresh mint or basil, or freeze them in ice cubes to add color and nutrients to your glass.

Incorporate blueberries into overnight oats and parfaits, and add them to healthy pancakes and baked goods, acai bowls, and chia puddings.

For a quick and nourishing treat, make a simple mock cobbler. Warm the berries on the stovetop over low heat with fresh grated ginger, and top with a crumble made from a combo of almond butter, oats, and cinnamon.

Blueberries also work well in savory dishes. Add them to hot or chilled wild rice or quinoa, kale salad, black bean tacos, or jam and chutney made with onions and herbs. Aim for a minimum of two cups of blueberries per week, but eating more is just fine. 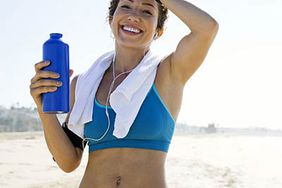 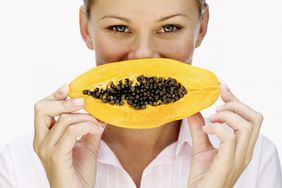 5 Foods With a Surprising Impact On Health