He died after putting a legal substance in his protein shake.

A 21-year-old in Australia died after overdosing on a legally available substance marketed as a dietary supplement.

The victim, Lachlan Foote, put caffeine powder in his protein shake on New Year's Eve 2018. His father, Nigel Foote, wrote on Facebook that he believes Lachlan might have gotten the powder from a friend—there was no record of Lachlan buying the substance, which can be purchased online.

Nigel wrote he believes Lachlan wasn't adequately warned about the dangers of caffeine powder, since his son tragically put a fatal amount in his protein shake.

This isn't the first time caffeine powder caused an untimely death. In 2014, a teenager in Ohio died days before his high school graduation after overdosing on caffeine powder.

People use caffeine powder for the same reason they drink coffee—it gives them a jolt. "Caffeine is a stimulant so it gives people a perk. It is also a performance enhancer for athletes. Some people find that caffeine also helps curb their appetite so some people try it for weight loss," Julie Upton, a San Francisco-based RD, tells Health.

In 2018, the FDA announced that caffeine powder would be better regulated. The administration said "pure or highly concentrated caffeine powder or liquid forms" would be outlawed when sold to consumers in large quantities.

"Less than two tablespoons of some formulations of powdered, pure caffeine can be deadly to most adults, while even smaller amounts can be-life threatening to children," the FDA said in a statement.

But even though caffeine powder is harder to get your hands on the US, the FDA hasn't completely outlawed it.

A quick Google search can lead you to multiple online retailers that will ship caffeine powder directly to you.

"If you're buying a sports nutrition product with added caffeine, always look at the amount of caffeine the product contains. It must be included on the package label," Upton says. Caffeine powder should be measured on a micro-scale because even a pinch more than the recommended amount can be harmful, we previously noted.

Pure caffeine can have side effects that are much more serious than the usual nervousness that comes when you drink one too many cups of coffee. Caffeine powder can cause your heart rate to rise or become erratic. In addition, it can result in seizures and death.

This makes the availability of caffeine powder all the scarier. Lachlan's father wrote on Facebook: "It's just insane that something so dangerous is so readily available. Please warn your friends, talk to your children…and perhaps check your kitchen cupboards…pure caffeine powder looks just like any other white powder…but a heaped teaspoon of it will kill you."

5 Common Mistakes Dieters Make—and How to Fix Them
Was this page helpful? 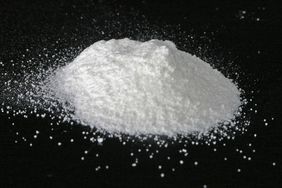