It's not bacon (sorry). A new study found that beans and peas ward off hunger better than meat.

You've probably heard that protein is the key to a satisfying meal. And when you think of the nutrient, your go-to is probably some type of meat. But a new study suggests that veggie-based proteins—specifically, beans and peas—may actually fill you up and keep you satisfied longer than animal protein.

Plant-based choices are not only better for the planet, the researchers say, but may also help people lose weight.

Vegans, vegetarians, and anybody else looking to eat less meat have long known that legumes (such as beans and peas) are a valuable protein source. Until now, though, little has been known about how they stack up against animal products when it comes to satiating hunger.

In the hours after eating each meal, participants were asked several times how satisfied (and how hungry) they felt. About three hours after breakfast, they were served lunch and instructed to eat as much as they wanted.

As expected, the researchers found that protein content did matter in terms of how hungry people were at lunch. On days when participants ate the high-protein legume patty, they ate 13% fewer calories at lunch than on days they had the lower-protein patty.

But somewhat surprisingly, the type of protein mattered too. Even though both high-protein patties had the same amount of protein (about 25% of total calories), participants still ate 12% fewer lunch calories when they had legumes for breakfast, versus meat.

And the meals made with beans and peas helped people feel satiated, as well, even in the case of the lower-protein meal. People rated the lower-protein legume patty (with an amount of protein equal to 9% of total calories) just as satiating—and as tasty—as the meat patty.

So what's the secret? Higher fiber content in the legume patties "probably contributed to the increased feelings of satiety," said head researcher Anne Raben, PhD, professor of nutrition, exercise, and food science at the University of Copenhagen, in a press release.

"It is somewhat contrary to the widespread belief that one ought to consume a large amount of protein because it increases satiety more," Raben said. "Now, something suggests that one can eat a fiber-rich meal, with less protein, and achieve the same sensation of fullness."

This isn't the first study to suggest that legumes can help people consume fewer calories overall; a study published in March found that eating more beans, peas, chickpeas, and lentils helped people lose weight, even without making any special effort to avoid other foods.

Cynthia Sass, RD, Health's contributing nutrition editor, agrees that these foods' protein and fiber combo satisfies, delays the return of hunger, and "leaves you feeling full but not weighted down or sluggish."

Sass was not involved in the new study, but she's a strong advocate for eating more pulses (part of the legume family and the umbrella term for beans, lentils, and peas, including chickpeas and split peas). She's also author of the book Slim Down Now: Shed Pounds and Inches with Pulses—the New Superfood.

In addition to their satiety-boosting benefits, legumes and other pulses are also rich sources of vitamins and minerals, Sass says, and they're prebiotics—"food" for beneficial bacteria in the gut. Research has also shown that pulses can boost calorie and fat burning, help reduce belly fat, and protect against diabetes, heart disease, and cancer.

"Pulses are also affordable, readily available, naturally gluten-free, not a common allergen, and they're incredibly versatile," says Sass. "I use pulses in both savory and sweet dishes, from stir-frys to smoothies, and I bake with pulse flours."

Sass recommends incorporating a half cup of pulses into your diet every day, either in place of or in addition to animal protein. (If you're pairing them, use less meat than you normally would.) Think black bean and veggie omelets, tuna salad with white beans, or chicken cacciatore with lentils.

More good news about beans and peas? You can buy them canned, frozen and pre-cooked, or steamed and vacuum-sealed for quick and easy preparation, says Sass.

Additional research is needed to definitively prove if and exactly how pulses and other legumes help prevent obesity. But based on existing research, Raben said, "it appears as if vegetable-based meals—particularly those based on beans and peas—both can serve as a long-term basis for weight loss and as a sustainable eating habit." 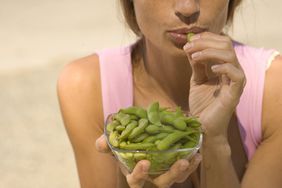