Stress may wreak havoc on your metabolism. Here's how you can stop stress eating.

I think we can all agree that stress is bad. Excess stress can cause headaches, muscle tension, digestive problems, sleep disturbances, and depression. Research shows it may also wreak havoc on metabolism and cause stress-induced weight gain.

We've known for some time that stress is connected to gaining weight, because a high level of the stress hormone cortisol has been shown to increase appetite and lead to stress eating, drive cravings for junk food, and make it easier to accumulate belly fat. And an Ohio State study shows that stress may also result in burning fewer calories.

What Exactly Is Metabolism—and Can You Speed Yours Up?

In the study, researchers questioned women about stress they had the previous day. The women were then fed a meal containing a very generous 930 calories and 60 grams of fat. After eating, scientists measured their metabolic rates and took blood samples.

In the seven hours after eating the mondo meal, those who had reported being stressed out within the previous 24 hours burned less of the fat they consumed, and they had higher levels of insulin, a hormone that contributes to fat storage. They also burned 104 fewer calories. That may not sound like much, but if you are aiming to lose pounds, it's enough of a difference to account for a weight gain of almost 11 pounds in one year.

Even if you can't fix the causes of your stress, you can make small changes to offset the effects. Here are five daily tweaks to help you beat stress-induced weight gain.

If stress causes your body to burn less of the fat you eat (making it more likely to be stored), aim to include some healthy fat in your meals—but avoid doubling up. For example, many clients tell me they order a healthy salad for lunch, but the toppings include both olive oil and avocado. Or they might snack on nuts alongside popcorn cooked in oil.

I'm not saying you should eat low-fat meals; fat is important for satiety and it's one of your body's key building blocks. But to keep it in balance, choose only one high-fat item per meal. For example, if you want avocado on your salad, dress your greens with balsamic vinegar rather than an oil-based vinaigrette.

If there's a chance that you'll burn fewer calories in the hours after eating due to stress, shift your servings a bit to slash calories without having to eat less food. For example, eating one and a half cups of mixed veggies and a half cup of brown rice instead of one cup of each can save you 60-75 calories. Or instead of one cup of quinoa, mix half of that with half a cup of spinach to save about 100 calories.

I think you see where I'm going with this. Trading in a portion of your dense grains, even healthy ones, for low-cal, fiber- and water-rich veggies is the easiest way to accomplish a quick calorie savings that doesn't require sacrificing volume.

20 Stress-Relieving Foods to Try if You're Feeling Anxious

Certain foods truly have been shown in research to raise your metabolic rate, and while the effects aren't astronomical, they may just counter some stress-induced metabolism slumps. One of my favorite natural metabolic boosters is hot peppers. One small study from Purdue University tracked 25 adults who consumed either no pepper, their preferred amount (half liked spicy food and half did not), or a standardized amount, which was about a half teaspoon of cayenne for six weeks.

Overall, both groups burned more calories when they ate spiced-up meals, and those who had been infrequent eaters of fiery food also felt less hungry and experienced fewer cravings for salty, fatty, and sweet treats. Try adding chili pepper or cayenne to steamed veggies, or if you can handle a little more heat, garnish your dishes with a sliced jalapeno. Hot peppers have also been shown to boost immunity and lower cholesterol.

Breathe before you eat

We continuously breathe without thinking about it, but Spanish research showed that relaxed, controlled breathing can effectively reduce cortisol levels. Before each meal, take a few minutes to sit comfortably in a chair, and spend a few minutes focusing on breathing, slowly and deeply, in through your nose and out through your mouth. You may be amazed how quickly this technique can help relieve muscle tension and shift your mindset.

Whenever possible, try to build in a brisk 15-minute stroll after meals. A study from George Washington University found that this habit helped normalize blood sugar levels for up to three hours after eating. Can't fit in 15 minutes? Go for 10, even five; just breaking a sitting pattern and getting your blood pumping can shift your metabolism. A post-meal walk can also serve as a little time to unwind, clear your head, connect with nature, or catch up with a walking buddy—all of which can help reduce feelings of stress. 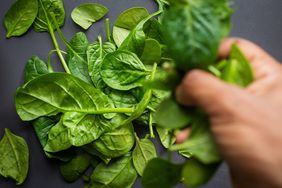 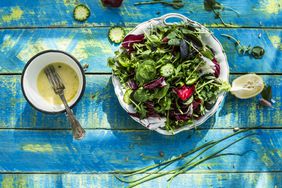