The laws create a legal pathway to head off acts of violence, including suicides.

Fact checked on June 6, 2022 by Vivianna Shields, a journalist and fact-checker with experience in health and wellness publishing.

Currently, 19 states and the District of Columbia have red flag laws in place. These statutes, also known as risk-based firearm seizure laws, make it possible to temporarily disarm people who pose extreme danger to themselves or others.

Biden's plea to "do something" about gun violence follows a spate of mass shootings across America, from Buffalo, New York, and Uvalde, Texas, to Tulsa, Oklahoma—and the carnage has only continued. The Gun Violence Archive counts 246 mass shootings in the U.S. so far this year. (It defines a mass shooting as an incident with four or more people shot, not including the shooter.)

In addition to preventing violence against others, public health and gun safety experts say red flag legislation has the potential to save people from self-harm.

"There's sort of a ripple effect to changing gun laws; it could save other lives by avoiding suicides," Jeffrey Swanson, PhD, professor in psychiatry and behavioral sciences at Duke University School of Medicine, told Health.

Here's what to know about red flag laws and their impact in terms of lives saved.

How Do Red Flag Laws Work?

Red flag laws create a legal pathway for law enforcement officers and, in many states, family members to ask a court to intervene when someone is at high risk of committing a violent act. The person may have made threats against others or exhibited suicidal behavior, for example. The court can issue what's called an extreme risk protection order (ERPO), preventing the person from purchasing or possessing a firearm.

Typically, it's a two-step process. In the heat of the moment, a temporary ERPO allows law enforcement to remove a person's guns and prevent new purchases for a period of days or weeks. Following a hearing with the person and the petitioner, the court will decide whether to extend the ERPO—up to a year in many states.

Some states, like New York, allow school administrators to petition the courts for a protection order. In DC, Hawaii, and Maryland, health professionals may request an ERPO. In five states—Florida, New Mexico, Rhode Island, Vermont, and Virginia—only law enforcement or other state officials may submit a petition, per the Giffords Law Center to Prevent Gun Violence.

One notable exception is Maryland, where half of the petitions come from family members and other civilians, said Frattaroli, who studies gun violence. An effort to educate law enforcement officers ahead of the law's implementation has led to "widespread uptake" across the state, she said. Also, the process is more accessible. "In Maryland, at any time of the day, any day of the week, you can file one of these petitions," whereas many states limit filing to normal business hours, Frattaroli explained.

A recent Reuters/Ipsos poll finds 70% of Americans support red flag laws. Should lawmakers in the U.S. Senate reach a bipartisan compromise on gun safety, it could include support, in the form of grants, to administer red flag laws. States could use the money to build websites to help people understand how the laws work or build infrastructure to expedite the processing of court documents, Swanson said.

Do Red Flag Laws Save Lives?

Every day in America, well over 100 people die from a gun-related incident, and more than twice as many are shot and injured. Among deaths by firearm, more than half are suicides. "We don't hear about them," Swanson said. "But every one of those is a story with a life cut short."

The nonprofit Rand Corporation published a paper in 2020 reviewing evidence on gun policies and outcomes. The research organization found no studies meeting its criteria to suggest that ERPOs decrease mass shootings. The evidence on averting suicides was deemed inconclusive.

However, there is evidence that ERPOs are being used in instances in which someone made a threat to carry out a multi-casualty shooting, Swanson pointed out. Whether those orders actually prevented mass shootings is another question: If you issue ERPOs to 30 people, you don't know whether one of them is "the needle in the haystack" who would have committed that act, he said.

In California, ERPOs are called GVROs—gun violence restraining orders. In a series of 21 case studies in which GVROs were issued to avert mass shootings, researchers at the University of California Davis School of Medicine found that none of the threatened incidents had occurred. Writing in the Annals of Internal Medicine, the authors concede that it's impossible to know whether the violence would have occurred if the orders hadn't been issued. Still, they say, the findings suggest that intervening early "can play a role in efforts to prevent mass shootings."

Kivisto, associate professor of clinical psychology at the University of Indianapolis, is the lead author of a 50-state analysis of red flag laws, focusing on Connecticut and Indiana—two early adopters of these measures. The 2018 paper in Psychiatric Services found a 7.5% reduction in firearm suicide rates in Indiana relative to expected rates in the 10 years after the law's enactment. In Connecticut, firearm suicides fell 13.7% in the eight years after the 2007 Virginia Tech shooting.

While it's true that the overall number of gun seizures is small, Kivisto said the laws are a "highly efficient means of suicide prevention relative to most clinically-based suicide prevention interventions." Based on data from Indianapolis and Connecticut, "we can estimate that one suicide is averted for every 10 or 11 firearm seizures carried out under ERPO legislation," he said.

Swanson added that people at risk of suicide are unlikely to have a record that would prevent them from going out and buying a gun. After examining records in two Florida counties, he and his colleagues reported that 72% of gun suicides involved people who were legally able to obtain a firearm. "This is where ERPO is a very important tool," he said.

The National Alliance on Mental Health supports red flag laws that focus on "specific, current behaviors and evidence-based risk factors for violence." The laws can be lifesaving when implemented appropriately, it said. But it takes a hard line against laws that "target, single out, or discriminate against people with mental health conditions." As the Alliance points out, "most people with serious mental illnesses are never violent toward others and are more often victims of violence than perpetrators."

Does your state even have a red flag law and, if so, how does it work? Lack of education about these laws remains one of the biggest barriers to their use, gun violence experts noted. "People just don't know about this," Swanson said.

And even if you are aware of the process, "it's a hard thing to do," Frattaroli said. If you live in a state that allows civilians to file for these court orders, by definition, you're either related to or cohabitating with the person who's in crisis. "So, it's not easy to go through the process, fill out the paperwork, appear in court and say, 'Look, I really need help.'" But that's when it may make sense to bring in a third party, such as someone in law enforcement who is familiar with the law in your state.

To get started, here are a few resources that may help:

The Bloomberg American Health Initiative at Johns Hopkins offers a state-by-state breakout of who may petition the courts and the type and duration of the protection orders that courts can issue.

Or visit the Giffords Law Center to Prevent Gun Violence, which maintains a library of ERPO laws and regulations by state. 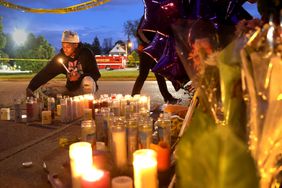