The American Dental Association weighed in on the TikTok trend—and it has some concerns.

Korin Miller
Korin Miller is a freelance writer specializing in general wellness, sexual health and relationships, shopping, and lifestyle trends, with work appearing in Women’s Health, Self, Prevention, Forbes, Daily Beast, and more. As a health journalist, Korin has reported heavily on everything from COVID-19 to mental health, with a little of everything in between.
health's editorial guidelines
Fact checked by Vivianna Shields

It's been difficult to escape the new "healthy Coke" trend circulating on TikTok for the past week—but if you're feeling inspired to try the balsamic vinegar and flavored seltzer combination, there are a few health risks to consider first.

A new press release by the American Dental Association (ADA) on Wednesday warned about the oral health implications of drinking "healthy Coke."

"I love balsamic vinegar, but I enjoy it more on my salad than in my drinking glass. It's much kinder to the teeth than bathing them in a beverage blend of two acids," Edmond Hewlett, DDS, a spokesperson for the ADA said in the release. "The more acidic the drink, the greater the risk of tooth erosion with frequent consumption."

And it's not just your oral health that the acidic concoction puts at risk—all that acid could irritate your digestive system too, especially if you're prone to heartburn or other stomach issues, according to health experts.

Here, we'll dig into why "healthy Coke" might not be so healthy after all—and how you might be able to make it a bit gentler on your body, if you're so inclined to try it.

What Is ‘Healthy Coke’?

"Healthy Coke" is a mixture of balsamic vinegar and flavored seltzer, preferably over ice—that's it.

The trend emerged on TikTok last week when user Amanda Jones shared the recipe from her Pilates instructor, who swears by the drink. "I am not joking you, it tastes just like a Coke," she told viewers. According to Jones, you just mix "a splash of balsamic vinegar" with "any sparkling beverage" (she used a guava-flavored LaCroix).

As other people began hopping on the "healthy Coke" bandwagon, reactions were mixed—some people could taste the comparison; others simply recognized they were drinking "carbonated balsamic vinegar."

How ‘Healthy Coke’ Could Affect Your Teeth

Along with the ADA's warning about the oral health risks of "healthy Coke," the Association added research from a new study published last month in JADA Foundational Science, which looked at the amount of dental erosion caused by non-carbonated bottled water versus flavored carbonated beverages, with and without sugar.

The researchers took pieces of recently extracted human teeth and soaked them in eight different beverages for 24 hours: Coca-Cola, Zevia Cherry Cola, LaCroix Cran-Raspberry, Polar Seltzer Lemon, Perrier, Smartwater, Dasani, and Alkaline 88 water. This was supposed to mimic a year's worth of exposure to the drinks, researchers said. The surfaces of the teeth were examined before and after soaking to identify any changes.

After 24 hours, the researchers found that acids in both sugar-free and sugar-containing sodas caused tooth enamel erosion. There was also enamel erosion with flavored sparkling waters, but it was less than that observed for drinks that contained sugar and were sugar-free. The only drinks in the study that didn't erode tooth enamel were non-carbonated, non-flavored bottled water.

If you add balsamic vinegar—a known acid—to the mix, you've got a potential recipe for some more serious enamel erosion. "People that drink a lot of acidic drinks like wine, soda, and carbonated beverages…we see these erosions at the gumline," Mark Wolff, DDS, PhD, dean of the University of Pennsylvania School of Dental Medicine, told Health. "Tooth enamel dissolves from acids, and this 'healthy Coke' is a very acidic recipe." As a result, he said, you could theoretically expect that it would cause even more damage than drinking fizzy water alone.

How 'Healthy Coke' Could Affect Your Digestive System

According to Ashkan Farhadi, MD, a gastroenterologist at MemorialCare Orange Coast Medical Center in Fountain Valley, California, it's possible "healthy Coke" could lead to heartburn or a general feeling of having a sick stomach.

Although everyone's digestive system is different, and some people may be able to drink "healthy Coke" with no issues, others may feel pretty uncomfortable after the beverage with symptoms of gastroesophageal reflux, like heartburn, nausea, the taste of food or stomach acid in your mouth, cough, or hoarseness.

There's also a chance that you could have a vinegar intolerance or sensitivity. Some chemical components in vinegars—like sulfites, histamines, acetic acid, and salicylates—can cause whole-body symptoms affecting the digestive, cardiovascular, and respiratory systems.

Vinegar aside, the carbonated drinks are generally known to cause bloating and gas, too—especially if you drink them regularly. If you have irritable bowel syndrome or other gastrointestinal woes, the carbonation of "healthy Coke" alone might exacerbate them.

How to Try ‘Healthy Coke’ Safely

If you're still interested in trying "healthy Coke," experts say there are a few things you can do to make the experience gentler on your teeth and stomach.

Drinking through a straw, however, can lessen the impact on teeth (it brings the liquid to the back of your mouth and away from your teeth), as can swishing plain water around in your mouth afterward to rinse off any excess acid. "That can be highly effective," Dr. Wolff said.

For your stomach, you could try drinking the concoction right after you wake up in the morning and before you eat anything else—this could "fool the stomach into thinking it already made a lot of acid and shut off the acid production which can help with mild reflux," said Dr. Farhadi. "But it can cause discomfort if you take it during other times or if you have more severe reflux."

You may also be able to start slowly with the concoction to see how much, if at all, it bothers you. "This is not a medication and there's no dose," said Dr. Farhadi. "An individual can adjust baked on how much it may hurt them." But if you end up developing gastrointestinal symptoms after downing a "healthy Coke," it's best to assume the drink isn't for you. 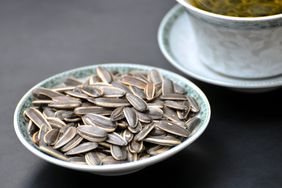