People who are unvaccinated or incompletely vaccinated against polio and living in New York should get the vaccine as soon as possible, the New York State Department of Health (NYSDOH) urged earlier this month.

The recommendation comes after an unvaccinated adult in Rockland County was diagnosed with paralytic polio. Wastewater surveillance in Rockland and Orange counties in New York, and in New York City, has also detected poliovirus in sewage, suggesting "likely" local spread of the virus.

"For every one case of paralytic polio identified, hundreds more may be undetected," State Health Commissioner Mary T. Bassett, MD, MPH, said in a press release Friday. "The detection of poliovirus in wastewater samples in New York City is alarming, but not surprising."

Some New York City neighborhoods—particularly in parts of Brooklyn and Staten Island—have lower-than-average vaccination rates. Rockland and Orange counties in New York also have vaccination rates much lower than the statewide average (approximately 60% compared to nearly 80%).

Though the NYSDOH has urged those who aren't vaccinated or aren't fully vaccinated to get immunized against polio, confusion persists among the fully vaccinated crowd—specifically whether a booster dose is necessary for some New Yorkers. Here's what to know about how much protection is conferred after an initial polio vaccination series, and who might still benefit from a booster.

Long-Lasting Protection From the Polio Vaccine

There are two types of poliovirus vaccines: a live vaccine, known as the oral polio vaccine (OPV), and an inactivated polio vaccine (IPV), which uses killed virus strains.

The only vaccine that is and has been used in the U.S. for the past two decades is the inactivated polio vaccine. The live vaccine is still used in other countries, and it carries the risk of spreading vaccine-derived poliovirus. The majority of poliovirus cases now—as opposed to many years ago—are vaccine-derived polio; wild poliovirus is considered rare and is mostly contained in regions with very poor vaccination rates, like Afghanistan and Pakistan.

Although it's not known how long protection from the polio vaccine lasts, the CDC says people are "most likely protected for many years after a complete series of IPV."

Even if protection from the vaccine does fade over time—as is common with may vaccines—transmission may occur, but most cases will be asymptomatic or very mild.

"The polio vaccine generates strong and durable T cell immunity against polio, as well as durable memory B cells," Monica Gandhi, MD, MPH, an infectious disease specialist with University of California, San Francisco, told Health. This helps protect most people against severe disease for a lifetime, she added.

Ultimately, "if people have already gotten their doses, we don't really recommend a booster at this point" for most people, Yvonne Maldonado, MD, an infectious disease specialist with Stanford Health Care, told Health.

What Is 'Vaccine Shedding'?

Certain People May Benefit From a Polio Booster

Though polio booster doses aren't routinely given out, health officials do recommend a single, lifetime booster dose of the IPV if you plan on traveling to a region with active polio cases. "That's the only time we generally recommend a booster," said Dr. Maldonado.

The CDC recommends one lifetime booster dose of IPV for adults who are at an increased risk of contact with poliovirus—as would happen with travel—if they've already had their original series.

Even in immunocompromised patients, an IPV booster would really only be recommended if the person was planning on traveling to an area with active polio. You can see which countries are experiencing polio activity on the CDC's Travelers' Health page.

The exception here, however, is with bone marrow transplant patients, for whom revaccination is recommended.

That said, Dr. Gandhi said she believes we may soon see a polio booster campaign for immunocompromised and older adults. "I personally think that immunocompromised and elderly patients (over 65) should receive a booster at this time of the inactivated polio vaccine if they are in a region with spread," she said.

Anyone who is curious about a booster shot should consult guidance from their local health department and talk to their healthcare provider. There's really no harm in getting the series all over again or another booster, said Dr. Maldonado.

Finally, it's crucial for unvaccinated people, adults and children included, to get immunized. Some version of the polio vaccine has been available in the U.S. since the 1950s, so most citizens have likely received the shots—unless they were raised by families that chose not to pursue childhood vaccination, said Dr. Gandhi.

"These viruses and bacteria are out there, it's just that we're protected from disease because we're getting vaccinated," said Dr. Maldonado. "If people say, 'Oh, they're not around anymore so we're not going to get vaccinated,' we're going to go back to the days when kids were routinely getting polio." 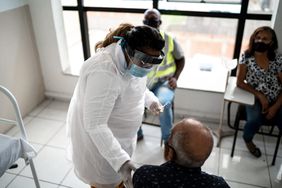