"Having to pay that much for the worst thing that’s ever happened to me was so hard."

Laine Edathikunnel, 31, found out she was pregnant the week of Thanksgiving. At 9 weeks along, she had a routine ultrasound, heard a fetal heartbeat, and was told everything "looked great." She was ecstatic. But two weeks later, while working out at the gym, she noticed she was spotting. She knew that spotting—light bleeding—is common during pregnancy. Still, she decided to call her ob-gyn, just to make sure.

"I made an emergency appointment with someone in the practice to have an ultrasound to confirm what I knew at that point [was a miscarriage]," Edathikunnel tells me. "I passed the pregnancy at home that same day."

This was Edathikunnel's second pregnancy loss in the span of six months. In August she had what is known as a missed miscarriage; the embryo was no longer viable, but her body did not expel it. "I still experienced really intense symptoms of nausea, food aversions, breast tenderness—all that stuff," she says. "When you think of miscarriage you think of spotting and a lack of symptoms, so when I went in and had someone tell me that [I was no longer pregnant] it was the last thing I was expecting to hear."

Because her body did not pass the pregnancy on its own, Edathikunnel had a manual vacuum aspiration—what is commonly known as an abortion—to remove the nonviable embryo from her body. "By the time I had the procedure, I was just shy of 12 weeks," she says. "That was my first experience with pregnancy loss."

The emotional toll of miscarriage is clear, and it is one that Edathikunnel is all too familiar with. Approximately one in four pregnancies results in loss, and one in six women who experience loss will develop long-term post-traumatic stress. Feelings of shame, guilt, and self-blame are common, and are often exacerbated by a lingering cultural misunderstanding of miscarriage. For example, the idea that if women simply followed medical advice to the letter, they would avoid miscarriage, is entirely false. Most miscarriages are not preventable.

As a psychologist specializing in maternal mental health, I have seen the mental, emotional, and physical toll that the prevalent narratives about "defective" pregnant bodies and perceived personal failings on the part of pregnant people can take. It's why I started the viral #IHadaMiscarriage campaign, which led to the publication of my first book, I Had a Miscarriage: A Memoir, a Movement. As more celebrities, influencers, and political figures continue to open up about their personal pregnancy and infant loss experiences, society is slowly but surely gaining a better understanding of the litany of reactions to pregnancy loss—which can range from relief to anger to disappointment to devastation to relief.

The idea that if women simply followed medical advice to the letter, they would avoid miscarriage, is entirely false.

But what is rarely, if ever discussed, is the financial toll of pregnancy loss, and how the bills that follow a miscarriage can exponentially exacerbate or even thwart the grieving process.

"My first miscarriage cost about $1,700 out of pocket," Edathikunnel explains. "I had already met my deductible, so it was just what insurance wouldn't cover...for ultrasounds, physician visits, the D&C (dilation and curettage) procedure and the testing of the tissue, which was about $300. For my most recent loss, a lot of the appointments I had fell into the first two weeks of the new year, so my insurance's new cycle was kicking in and I hadn't met my deductible. So far, I have paid a little over $2,000."

For those who do not have savings, gainful employment, or insurance, the financial ramifications of pregnancy loss can be more severe. Plus, the bills that continue to roll in can be deeply triggering as well—propelling a person back to the moment they realized or were told they would no longer be able to carry a pregnancy to term.

"You may be having a good day, and then these charges hit your account, and all of a sudden you're transported back into that hospital bed, looking up at the ceiling," Edathikunnel says. "You're already in the process of grieving and it hits you like a ton of bricks."

While the cost of a pregnancy loss will vary depending on a number of factors, including how far along a person is when they miscarry, any additional medical care that may be required, where they live, whether or not they're insured, and the type of coverage they have, pregnancy losses that require medical aspiration to remove the non-viable embryo, and/or a visit to the E.R. can range from $2,400 to $7,500.

Losses that do not require additional medical care or treatments cost less, but that doesn't mean the emotional toll of receiving a bill is any less intense.

For those who do not have savings, gainful employment, or insurance, the financial ramifications of pregnancy loss can be more severe.

After seven months of trying to conceive, Amanda, 27 (who asked that she be referred to by her first name only), found out she was pregnant—but felt uneasy about the pregnancy. Her husband tried to reassure her, but still, something felt off. At eight weeks, she started experiencing cramping, and two days later, an ultrasound confirmed that there was no longer a heartbeat.

"I was very fortunate that I didn't have to go to the hospital or have a D&C. If I had, the cost would have been much higher," Amanda tells me. "On the bill were my two ultrasounds, blood work, and my follow up visit. Out of pocket I paid $258." Amanda says that her insurance, which changed without her knowledge, paid roughly 30 percent of the total cost, but it was "still not easy to come to terms with."

For Amanda, holding the medical bill in her hand as proof of her loss—broken down and itemized—caused her additional pain.

"The amount was not the problem," she explains. "It was harder to receive that bill and see what the charges were and the dates, because it brought that pain back. It felt like my doctor saying, 'Here's your miscarriage bill.' Having to pay for the worst thing that's ever happened to me was so hard. I wish we didn't have to pay for the things that cause so much emotional pain."

Holding the medical bill in her hand as proof of her loss—broken down and itemized—caused her additional pain.

Both Amanda and Edathikunnel plan to keep trying to get pregnant. "[My husband and I] are willing to do whatever it takes," Amanda says. "It may really hurt us down the line, but so far we're not going to let it stop us."

For Edathikunnel, the experience has lit a fire under her—and not in a good way, she explains.

"Obviously, it turns into another conversation about how broken health care and insurance coverage is, especially fertility and women's health," she says. "I'm so fortunate that having two miscarriages didn't bankrupt me, but I can't imagine what that would do to someone who didn't have the money to pay for these horrible experiences."

"You've already paid the ultimate price," she continues. "For there to be a cost associated, it feels like you're kicking a wounded person. You're kicking someone while they're down. The emotional cost is high enough. Why does there need to be a financial one as well?" 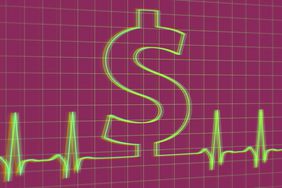