Cold weather and stress can trigger the symptoms, which sometimes last for hours.

Everyone gets so chilly now and then that they can't feel their fingers. After an afternoon of snowball-throwing or ice skating, it's totally normal for your extremities to take a little while to warm up. But around 5% of the population—myself included—suffer from a much more intense version of this predicament. At the slightest chill, I can lose sensation in my fingers (and sometimes toes) for hours at a time.

It hasn't always been this way. I never felt particularly resistant to cold weather until later in life—years after going to college in Chicago, where frozen fingers and toes were a common occurrence during winter. Back then, I could traipse around my frigid college campus without too much discomfort. But in my 30s, even an activity as brief as walking to the car from my house could leave my fingers completely numb and stark white, as if the blood had completely drained out of them. And even after my fingers finally regained feeling, they prickled and tingled with intense pain.

Eventually, after several winters of dealing with this (and a general practitioner who dismissed my concerns), I was diagnosed with Raynaud's syndrome—a very real, very aggravating, sometimes painful vascular disease. And while it may sound like a simple case of needing to add gloves to my wish list, there's significantly more to it than that. Here's what I've learned about my condition—and what I'd like others to know, too.

Raynaud's syndrome, sometimes called Raynaud's disease or Raynaud's phenomenon, is a vascular issue that occurs when, in cold conditions or in response to stress, the small arteries that supply blood to the extremities narrow.

"Normally, when exposed to cold temperatures, it is common to experience some coldness in the hands and feet, as the body's normal response with cold exposure is vasoconstriction to conserve core body heat," Danielle Bajakian, MD, vascular surgeon and assistant professor of surgery at Columbia University Medical Center, tells Health. "Patients with Raynaud's Syndrome have an exaggerated response which manifests as a more severe and distinctive reaction. Typically, the changes are dramatic and include turning white or blue."

But even when the blood flow returns to those extremities—which can include the fingers and toes, as well as the ears, nose, lips, and even nipples—the issues don't stop. The skin then turns red and throbs or tingles, according to MedlinePlus, a resource of the US National Library of Medicine. In severe cases, that loss of blood flow can cause sores or tissue death.

In my case, I can go days—or, in the summer months, weeks—without an attack of Raynaud's syndrome. But even the warmth of my southwestern climate isn't always enough to prevent the tell-tale seeping of sensation out of my fingers (think: going into air-conditioned buildings or having something stressful happen). "Both extreme cold and stress are both triggers for the autonomic fight or flight response," says Dr. Bajakian. "Since this response is in overdrive for these patients, even a minor stress can be a trigger."

I don't always know how long an incident of numbness and pain will last, either. Medical literature doesn't have a lot to say about the duration of attacks. "The timing of vasospasm is variable [from] patient to patient," Sameer K. Mehta, MD, cardiologist, and co-director of the Amputation Prevention Center at Rose Medical Center in Denver tells Health... "It often also depends on how long [extremities] are exposed to the potential cause."

RELATED: Everyone's Talking About Mitch McConnell's Discolored Hand—Here Are 10 Things That Can Cause Discoloration

When I was first diagnosed with Raynaud syndrome, my first question was, "Why me?" I was a young, healthy woman with no underlying conditions—why would my body lack the ability to regulate its vascular response to cold?

Unfortunately, medical science doesn't always offer an explanation. According to 2013 research in the Journal of Vascular Surgery, although Raynaud's Disease was first described in 1862 by French physician Maurice Raynaud (hence the name), it remains a poorly understood condition. In fact, in primary Raynaud's—the kind I have—there's no known cause. This version of the disease is not associated with any other health problems.

However, there are certain conditions that can make people more susceptible to Raynaud's. "Patients with connective tissue disorders and autoimmune disorders such as lupus and scleroderma are much more likely to suffer from Raynaud's Syndrome," Dr. Bajakian says. Rheumatoid arthritis, blood disorders, atherosclerosis, and Sjögren's syndrome may also increase the risk, while medications, repetitive stress injuries, and chemical exposure can lead to vascular problems in the hands and feet. When someone suffers from Raynaud's in connection with any of these causes, their case is known as secondary Raynaud's, according to the National Heart, Lung, and Blood Institute (NHLBI).

The other factor that can predispose you to this uncomfortable condition? Your gender. Women are significantly more likely to suffer from Raynaud's than men. Some animal research, cited by Scleroderma & Raynaud's UK (SRUK), has suggested that estrogen levels may impact blood flow, and therefore cause the phenomenon in women, but there's really no hard and fast explanation. "It's not known why this condition is much more prevalent in females," Dr. Mehta says.

As much as I might wish for a magic pill that could take away my Raynaud's symptoms, treatment lies almost entirely in prevention. "Simply, keeping the affected fingers or toes warm can often ameliorate an attack," Dr. Mehta says. "I often ask patients to wear socks around the house during the colder months, and in very symptomatic patients wear gloves." To relieve stress-induced Raynaud's syndrome, Dr. Bajakian suggests trying biofeedback and meditation.

For people with severe symptoms, certain intensive treatment options do exist. "When simple measures do not work, we will trial medicines that dilate the arteries [to try to prevent vasospasms]. The two most commonly prescribed classes of drugs are nitrates and calcium channel blockers," Dr. Mehta says.

Over the years, I've learned to be prepared—even in sunny Arizona—for symptoms to appear at any time. From November through February (our "cold" season) I turn on my car's seat warmers and blast the heat, much to the dismay of my warm-blooded family. I pack gloves every time I travel. And once temperatures dip below about 70, I haul out my layers of sweaters and fuzzy socks.

Culture has a strange way of equating cold tolerance with mental and emotional fortitude. I'll be honest: I get a little annoyed when someone pokes fun at me for bundling up while they freely enjoy chilly weather in a T-shirt. (It's not like I want to be wearing fur-lined gloves in September.)

Still, I take comfort in knowing that I'm not simply a weather wimp. Raynaud's syndrome is a real condition that doesn't deserve to be disparaged. "Although most people have an aversion to cold weather, Raynaud's patients have an entirely different response to cold temperatures," Dr. Bajakian says. "Without proper lifestyle modifications, such as limiting exposure and proper medical management, severe cases can result in finger ulcers, gangrene and loss of a digit."

For now, I'll keep layering up, wearing gloves when I need to, and trying to (respectfully) educate my friends and family about my condition. To me, it's more important to protect myself from physical pain than to be cool—in both senses of the word. 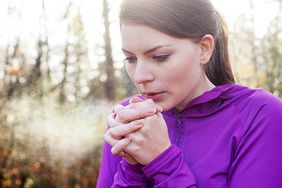 This Might Be Why Your Hands Are Always Cold