What Is Gleeking? This Doctor Went Viral on TikTok for His Explanation—And Apparently Everyone Can Do It

Here's how you can give it a try.

Let's face it: As amazing as the human body is, it's also really freaking weird—and various TikTok users have recently gone viral for sharing one of those strange things the human body can do.

It's called gleeking—aka shooing saliva out from under the tongue—and its been happening in a growing number of TikTok videos. It's unclear why exactly (likely just something fun and funny to do for a few likes) but one doctor has already garnered millions of views for his post explaining the bodily phenomenon.

Daniel Aranov, MBBS, a general practitioner in Australia, shared his own TikTok recapping some of the gleeking videos he previously came across. "Everyone can do it," he says in the video (yes, he's talking about gleeking). "We have glands that make saliva that sit right underneath our tongue. They release their saliva through two little openings."

In fact, "there's a way to train your tongue to squeeze those salivary glands and gleek," he said, before referencing a WikiHow article on the phenomenon (more on that later, of course).

So what's the deal with gleeking, exactly? And is there any actual benefit to this? Doctors weigh in.

Let's get this out of the way upfront: "Gleeking" is not a phrase used in medicine. There's actually "no medical term for this" at all, Janet O'Mahony, MD, a Baltimore-area primary care doctor at Mercy Medical Center, tells Health.

Still, most doctors have at least heard of this before—even though they say the practice of gleeking is pretty useless. "There's nothing medical about it, but there's nothing harmful about it," Mark S. Wolff, DDS, PhD, dean of the School of Dental Medicine at the University of Pennsylvania, tells Health. "It's the salivary glands doing what the glands are supposed to do."

What Is COVID Tongue, and Is It a Sign You've Been Infected With the Virus?

What makes the body able to gleek?

First, a quick mouth anatomy lesson. There are three pairs of major salivary glands in your mouth, Dr. Wolff explains. "Then, there are thousands of what we call 'minor' salivary glands that are inside the lips and cheeks that help keep them moist," he says.

In general, gleeking comes from "built up watery saliva" in your sublingual glands, Steven Morgano, DMD, chair of the Department of Restorative Dentistry at the Rutgers School of Dental Medicine, tells Health. Then, "pressure on the glands from the tongue…causes the saliva to squirt out," he says.

While those glands and the saliva excreted from them have a purpose while you eat, being able to gleek really doesn't have any benefits, says Dr. Morgano. "It is a quirk," he says.

Rare Skin Infection Caused This Man to Have a 'Double Tongue'

So, how can you gleek?

Dr. Morgano points out that most people do this by accident, if they do it at all. But, if this seems like something you actually want to do, there are some ways to prime your mouth for gleeking.

Dr. Wolff recommends first eating something sour—it can stimulate the salivary glands more. Then, push your tongue out of your mouth, lift it up, and curl the tip back so that it rests behind your top teeth.

"If you tense the muscles in the tongue right, it squeezes the duct and saliva squirts right out," he says.

While Dr. Wolff says that "everyone can do this," it can take some practice to be able to do it on command. Happy gleeking.

All About Salivary Stones, Star of That Terrifying New Viral Video 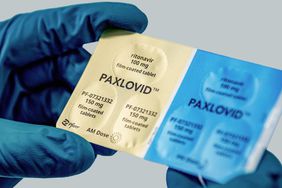 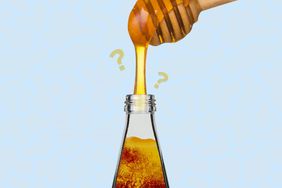