An allergic reaction isn't the only risk

From the skull-breaker challenge to the condom snorting challenge, teens have never failed to find a way to make everyone else shake their heads and wonder why they put themselves at risk by following dangerous viral trends. But this latest challenge, on the social app TikTok, is a clear reflection of just how damaging social media's herd mentality influence can be.

Over the past week, teens have been posting videos of themselves gluing their upper lips to their Cupid's bow, the curved indentation on the top edge of the lip below the nose. Most of the videos actually show the process: A teen applies glue above the upper lip, waits for it to start drying, then presses their lip into the glue to achieve an imitation lip injection.

It's unclear how this trend started, but stunts like this are not new on TikTok. For any non-teen whose only reference point for TikTok is Kesha's 2009 song, here's a little background: TikTok is a social media app where users share short videos of themselves singing, dancing, and competing in viral internet challenges. Download the app, and you'll see that most of the videos feature kids, teens, and young adults.

Since tons of kids are seeing these videos—and clearly trying out the trend for themselves—is there any physical health risk that they might face by gluing two parts of their face together? Potentially.

The glue itself could lead to contact dermatitis, an allergic skin reaction, according to the American Academy of Dermatology (AAD). The group makes the point on their website that latex is one of the most common causes of contact dermatitis—and latex is a popular ingredient in many types of glue. Then there's the pain and irritation that comes with trying to separate one part of the lip from the other when the stunt is over. Ouch.

But the physical effects of a challenge like this aren't the only impact it might have. Health spoke to Owen Muir, MD, mental health director at Brooklyn Minds, a mental health treatment center in New York City, about the psychological effects social media challenge sites like TikTok have on young people.

"Teenagers love trends, and that's been going on long before we had social media," says Dr. Muir. "It's a way for them to connect with other teenagers and to make sure that they're in the in-crowd. Social media companies have done a great job in encouraging it."

Dr. Muir explained that teens' brains are not fully formed just yet, so their ability to assess risks isn't fully developed. Teens are still developing a sense of identity, and they look to their peers for guidance. While an adult may see a trending challenge like this and think about what could go wrong by gluing your face together, a teen will focus on how all their friends are participating in this stunt and ignore the obvious dangers.

Research has previously addressed the idea that social media sites create a herd mentality, encouraging people to think a certain way or do something simply because of the number of likes a post about it has received. The implication is that if enough people liked it or posted their own clips doing it, it must be okay.

While adults usually have the cognitive skills to resist following every trend or challenge that comes into their feed, teens are more susceptible thanks to their not-fully-developed brains—leading them to take on a challenge that might be far more dangerous than gluing their lips.

A JAMA study from earlier this year also found that adolescents who spent more than three hours per day on social media were more likely to report mental health issues. It's not what the exact connection is, and the study didn't focus on viral challenges but on social media as a whole. Still, it lends support to the idea that too much social media of any kind probably isn't a good thing for young people.

If you're the parent of a teen and concerned that they might fall for a stunt like the one on TikTok, Dr. Muir suggests having a conversation with them, laying out the dangers of viral challenges and how following their peers and not thinking through the ramifications can land them serious injuries, or worse. 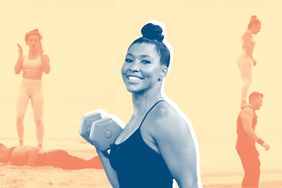