Breast implant illness (BII) symptoms tend to mirror those of an autoimmune disease.

Tamra Judge has revealed that she had her breast implants removed after they caused her to develop breast implant illness (BII). The former Real Housewives of Ocean County star made the announcement in an Instagram post on Tuesday.

"Implants & capsules removed. Feeling tired & a little sore as expected. I'm pretty sure not working out will be the hardest part for me," the 53-year-old wrote in her caption. "I know it sounds crazy but I woke up today with rosy cheeks, no sinus congestion and happy thoughts. I'm hoping I will continue to see health improvements as the weeks go on 😊."

In the photo, Judge is wearing a zipper support bra, with gauze and drains peeping out from the bottom of the bra. "Although I do have a good amount of breast tissue , what you're seeing is swelling, two layer padded bra and gauze," she explained. (FYI, drains after breast implant removal—which is medically known as explant surgery—are sometimes needed; "they are small, thin tubes temporarily placed under the skin within the pocket to drain any excess blood or serous fluid that may collect," according to the American Society of Plastic Surgeons.)

Judge took the mirror selfie after returning home from her check-up with her plastic surgeon, who said that the recovery was going well.

Judge first announced that she was getting her implants removed due to "autoimmune issues" in June. In her Instagram Story from then, she said that she decided to get the surgery because she was "tired of being tired and inflamed." As People reported, Judge has been open on social media about her thyroid issues; swollen joints; fatigue; and bladder, sinus, and gut inflammation—all of which she says stemmed from her implants.

It is with her latest post that Judge put a name to the cause of her symptoms: BII, a potential complication of breast implants. Although BII isn't a medical diagnosis and there is still no direct correlation between patients with breast implants and symptoms of BII, it's still something to take seriously, as Health has reported. "BII patients and their symptoms must be handled with care, as these symptoms can affect [a person's] daily life," Saul Lahijan, MD, owner and plastic surgeon at the Beverly Hills Institute of Plastic Surgery, previously told Health.

The US Food and Drug Administration (FDA) has also made it clear that BII is a potential complication of breast implants that people should be aware of. Last year, the FDA issued guidance recommending that breast implant labels include easy-to-read information about the implants' potential health effects, including BII. The recommendation for clearer warnings came after the FDA received new information about the risks associated with breast implants, including the "systemic symptoms commonly referred to as breast implant illness (BII) that some patients attribute to their implants."

'I Got Implants After Surviving Breast Cancer Twice—Then I Learned They Can Cause Cancer, Too'

And Judge's symptoms are right in line with the potential side effects that BII is believed to cause. That's because, although the symptoms of BII can vary person to person, they tend to mimic those of an autoimmune disease, as Janie Grumley, MD, a breast surgical oncologist and director of the Margie Petersen Breast Center at Providence Saint John's Center and associate professor of surgery at Saint John's Cancer Institute in Santa Monica, California, previously told Health. That means that symptoms of BII can include:

"The symptoms are almost everywhere, from head to toe," Dr. Grumley said.

But research has shown that getting breast implants removed can provide significant and lasting BII symptom relief for those who are experiencing them. According to a 2020 study published in the Annals of Plastic Surgery, patients who were followed for two years after their surgery reported having symptoms improve within 30 days after having their implants removed.

People took to the comments section of Judge's post to share their own experience with explant surgery. "I had mine removed 2 years ago after having in for 10 years. Best decision!!! Happy healing!," someone wrote. "Just had my implants and capsules removed 5 days ago and already feel like myself again," another person said. As it turns out, "this particular surgery has grown in popularity in recent years," according to an Instagram post that Judge's surgeon, Milind K. Ambe, MD, shared following her surgery.

In her caption, Judge thanked everyone who had shared their own BII stories, including 30-year-old model Kayla Lochte, who recently underwent explant surgery herself. To show her support of Judge, Lochte commented, "Can't wait to watch your journey and health be given back to you." 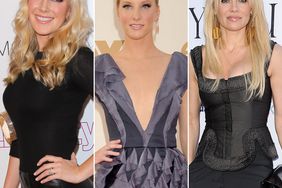