What Is Acute Radiation Syndrome?—The Disease on HBO's 'Chernobyl'

Far be it from us to suggest you sit around and binge-watch TV. Not only is it bad for your health—it can lead to blood clots even—but it's not very productive. However, sometimes it can be unavoidable if you're stuck in bed or on your couch for extended periods—like say after you broke your leg rollerblading. When you're stuck like this, why not watch a docu-series like HBO's Chernobyl where you will learn about the devastating effects of acute radiation syndrome (ARS)—also known as radiation poisoning?

If you haven't seen HBO's Chernobyl, you're missing out. The mini-series retells the story of the 1986 nuclear power plant explosion in what is now Ukraine, from the moments after the explosion to the detrimental aftermath of the accident.

One of the most poignant aspects of the show is its close-up look at the horrors of acute radiation syndrome (ARS). The visuals make it painfully obvious that something terrible happened to those who were directly exposed to radiation from Chernobyl.

In the three years following the Chernobyl nuclear power plant explosion, about 530,000 recovery operation workers—think firefighters and other first responders—were enlisted to help clean up the accident. These workers were exposed to extremely high levels of radiation—an average of 120 millisieverts (mSv). That's more than 1,000 times more powerful than a chest X-ray, according to the World Health Organization. Those who responded earliest are believed to have been exposed to levels even higher than that.

What Is Acute Radiation Syndrome?

According to the Centers for Disease Control and Prevention (CDC), acute radiation syndrome occurs when a person is exposed to a very high level of radiation in a short period of time. The first symptoms of ARS include nausea, vomiting, headache, and diarrhea, which can occur within minutes to days after exposure.

After the initial symptoms subside, an ARS victim will usually feel fine for a period of time before relapsing. The person's symptoms will vary depending on the level of radiation they received, but some of the symptoms include loss of appetite, fatigue, fever, nausea, vomiting, diarrhea, and possibly even seizures and coma.

Skin damage is another side effect of ARS, which becomes apparent in the third episode of the show. Swelling, itching, and redness of the skin can occur. In more extreme cases, people can also experience permanent hair loss, damaged oil- and sweat-producing glands, skin discoloration, scarring, and ulceration, or tissue death.

The higher the exposure, the more likely the person will die from ARS. Death from ARS typically occurs as a result of bone-marrow decay, which causes infections and internal bleeding.

Valery Legasov, the chemist who worked to help resolve the Chernobyl explosion, is a main character in the HBO mini-series. He reiterates throughout the show that radiation exposure—even at moderate or low levels—can have long-term effects on a person's health.

According to the EPA, exposure to radiation in moderate doses (like the nearby town of Pripyat would have had) can raise a person's risk of getting cancer—in particular, thyroid cancer. Additionally, children and fetuses are at increased risk for radiation-related health problems. Exposure at moderate levels can cause cells to divide rapidly, which can result in developmental and birth defects in these sensitive groups.

What Do Iodine Pills Do?

Throughout the show, multiple characters recommend iodine pills as a treatment for ARS. Iodine helps the thyroid block harmful radioactive iodine from being absorbed, which ultimately could lead to cancer.

According to the CDC, the thyroid is the most sensitive organ to radioactive iodine, so preventing its absorption in the body can help reduce the risks of developing cancer. While plenty of foods (like table salt) contain healthy levels of iodine for a normal diet, they do not have the level of potassium iodine needed in the case of nuclear fallout.

Iodine pills should not be taken unless recommended by health officials, in the case of a radiation accident. They also won't protect against any of the other immediate health effects of radiation poisoning besides thyroid damage.

Ultimately, the levels of radiation needed to cause ARS would only happen in the case of a radiation crisis. While you can take solace in the fact that the levels of radiation from Chernobyl have decreased significantly over the past 30 years—and the fact that disasters involving nuclear power reactors are rare—you can learn more about what to do in case of a radiological emergency here. 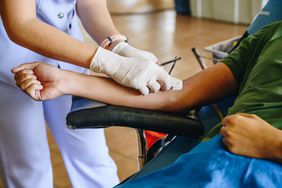