About eight years ago, when I was in high school, I would hear a faint heartbeat in one of my ears every now and then. I didn't think anything of it. Then, when I started working as a substitute teacher in 2018, I began hearing the heartbeat more often. At my annual checkup, I mentioned it to my general practitioner. She told me if the problem got worse, to let her know.

A month later the sound became louder and nearly constant, like a whooshing sound. When I turned my head to the right, it boomed even more; when I turned to the left it became softer. I could stop the sound momentarily by pressing on the jugular vein in my neck with one finger. The whooshing drove me nuts when I began hearing it in both ears for hours on end.

The worst was at night when it was quiet and I didn't have distractions. I used Netflix, my fan, and other white noise to try to get to sleep and stay asleep, but I wasn't usually successful. I was drinking absurd amounts of coffee to get through my teaching day. Sometimes the other teachers poked gentle fun at the giant coffee mug I brought everywhere.

I called my doctor and told her what was happening, and she referred me to an ENT—an ear, nose, and throat specialist. The ENT did a hearing test and said my hearing was perfect. That was good news, because I had recently been accepted to graduate school for choral conducting, and I'm hoping to be a professional opera singer and teacher someday.

The ENT also ordered a test called head computed tomography angiography (CTA). For this test, they put a special dye in your veins through an IV and then give you a CT scan to take pictures of blood vessels and tissues in the brain.

A Mass in My Brain

Meanwhile, my best friend from college and I had found a deal for an inexpensive four-day trip to Paris. I needed some fun in my life, so we went on the trip after that test. I was still in Paris when my phone rang at 3 a.m. It was the doctor's office calling to say the scan showed a small mass on my brain. I was very nervous but they said not to worry just yet.

The ENT referred me to a neurosurgeon in Syracuse, N.Y., near where I live. My best friend urged me to have a good time and not worry about the mass until I got home, since it's not every day we go to Paris. I tried really hard to do that, but of course, it stressed me out.

More Tests and No Answers

Shortly after we got home, I went to see the neurosurgeon, who wanted me to have a cerebral angiogram. This test took pictures of the insides of my blood vessels by using dye inserted into an artery in my leg through a long flexible tube.

I also got another CT scan, which showed that the mass on my brain was not cancerous. That was a relief. I learned that sometimes people will have a mass of cells they just don't know about it unless it's a problem. Mine wasn't a problem.

The neurosurgeon was one of the most impersonal doctors I've ever met. Before the cerebral angiogram, he told me, blank-faced and in a monotone voice, all of the things that could go wrong—including getting a stroke from the dye. My mom was freaking out. I know they have to tell you these things, but his delivery was terrible. The most frustrating part was when he was performing the procedure, I was lying there and he said, "Don't really see anything. No cancer. No clots. Nothing medically wrong with you."

Hearing that made me a little emotional. Although there was nothing wrong with me, according to him, I still had this constant, maddening whooshing sound in both ears. He said this was a good thing because I didn't have cancer or something dangerous. I wasn't consoled. I didn't ask about the next steps because I felt like he was saying there was nothing more to do about this.

I didn't cry; I left determined to prove him wrong. I'd had to do singing auditions when applying to grad school with this noise in my ear, and it's really difficult to sing when there's a loud, driving beat going on inside your head 24/7. I had to figure this out myself because not only was it affecting my daily life, but it could also possibly derail my career.

That night I started googling and found the term "pulsatile tinnitus" to describe what I was experiencing. I searched this term on social media and came across my saving grace: the "Pulsatile Tinnitus Whooshers Unite!" group on Facebook. There are nearly 14,000 people in this group from all over the world. Everyone in the group shares information and asks questions to help one another. Some of these people had the condition for 40 years or more and felt suicidal from the frustration.

I posted my story in the group, seeking advice. The consensus was that I should get copies of the scans I'd had so far and send them to another neurosurgeon. Group members also recommended a neurosurgeon and interventional neuroradiologist in New York City, Athos Patsalides, MD, who had developed a procedure that might cure my condition.

Since my scans were done at several different facilities, I had to run all over the place collecting them in person. Then I called my internist, begging her to send me a referral to this doctor in Manhattan. She did, and when I called to make an appointment, they told me to send in my scans first.

Shortly afterward, they called back to say the scan I had done in Syracuse wasn't clear enough and they wanted me to come in for an MRV (magnetic resonance venography) scan on the same day as my appointment. This type of scan uses a contrast dye to show the veins, but instead of X-rays it would use a computer, a large magnet, and radio frequencies to make very detailed images of my brain.

4 Signs You Should See Another Doctor for a Second Opinion

A New Diagnosis and Treatment Plan

At the appointment, Dr. Patsalides reviewed my scans and showed me the problem: Some of the veins in my brain had narrowed, causing the blood to have to squeeze through a small space with every heartbeat. I was hearing this whooshing because the veins were near my eardrum. The condition causing my pulsatile tinnitus is called venous sinus stenosis. The doctor was very confident he could fix it with a minimally invasive procedure called venous sinus stenting that he and his colleagues had pioneered in 2016.

The procedure involved inserting a catheter in the femoral vein in my upper thigh and threading a stent in it all the way up through the narrowed veins in my brain. The tiny stent would widen those veins so the blood stopped making noise as it passed my ears each time my heart would beat.

After meeting Dr. Patsalides in person and seeing how confident and knowledgeable he was about this procedure, I said yes right away. He said he was an expert with this type of procedure and was confident he could fix the issue and give me some sanity back. I asked if it was possible to have the procedure in three weeks so I might be cured before my upcoming six-week trip to Israel in mid-June, and he said yes. I was so happy after the appointment that I found myself wandering the streets of New York City without knowing where I was going.

On the day of my procedure, a nurse gave me a sedative through an IV and wheeled me into the operating room. As Dr. Patsilades inserted the catheter in my leg and started snaking it up to my brain, the nurse kept telling me to slow my breathing, which I remember being difficult. I think I was panicking a little. Then I started to hear weird clicking sounds and feel a hot burning in my brain, which was moderately painful.

After this, my sedation was reduced so the doctor could talk to me. He said I had intracranial hypertension, which means that the pressure of the fluid found in the spine and brain was too high inside my skull. I had a few options.

I asked if he thought the medication would actually work, and he said probably not. The stents were my best bet. I asked him to do the stents on both sides and at that point, they gave me general anesthesia.

The next thing I remember was waking up in the recovery room with a pounding headache, but no whooshing sound! I had one night at the hospital, took pain medicine for four or five days, and spent a couple of weeks resting.

Some days I had a bad headache and other days the incision site was sore, but it was well worth it. I posted in the Facebook group about my surgery and recovery and many people began messaging me for advice or to ask me questions. It kept me busy during my recovery.

A few weeks later, I was hiking in Israel, free from that maddening sound, and getting on with the rest of my life.

ADHD and Relationships: Living With Someone With ADHD
My Doctor Misdiagnosed Me With Seasonal Allergies—but I Actually Had Lung Cancer That Spread to My Brain 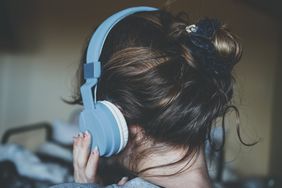