I'll never regret protesting, but here's what I wish I had known.

Burning—that’s the best word to describe the sensation I felt when a police officer pointed a canister of pepper spray in my direction.

It was 2009, and I was one of the hundreds of people who took to the streets of Oakland, California to express our frustration and anger over the murder of Oscar Grant, a black man shot and killed by former Bay Area Rapid Transit police officer Johannes Mehserle on January 1, 2009.

That protest started off peacefully enough—much like the ones happening nationwide, calling for justice for George Floyd and numerous other black men and women unjustifiably killed at the hands of police—but it, too, eventually turned violent. Law enforcement opted to use pepper spray as a riot control agent, spraying the irritant indiscriminately into a crowd that included men, women, children, and the elderly—and myself.

I felt the burning sensation instantly and everywhere; it seemed as though it lasted forever (in reality, it was more like 25 minutes of intense pain, followed by 30 minutes of mild pain). But that memory and those feelings have been etched in my mind ever since, brought to the forefront each time there's news of protests and riots and black people dying at the hands of police.

Thankfully, many people will never have to encounter pepper spray like I did, and will be able to peacefully protest. But even the most well-intentioned protests have the possibility of turning violent and involving pepper spray (or other riot control agents)—here's what you need to know if that happens.

What is pepper spray?

Pepper spray—technically known as oleoresin capsicum (OC)—is lachrymatory agent, meaning it affects the eyes, causing tears, pain, and temporary blindness, according to a 2017 retrospective study the journal Police Practice and Research. The oil-based irritant is dispersed via canister and used by law enforcement in both dealing with suspects and as a riot control agent.

The word "capsicum" probably looks familiar—that's because it contains capsaicin, a substance also found in hot peppers, which contributes to the burning sensation you feel when you bite into one. In the medical field, capsicum is used as a topical treatment for temporary relief of muscle or joint pain, Yomaris Pena, MD, a physician at SOMOS Community Care in New York City, tells Health. "It's normally used as a topical anti-inflammatory treatment, but [when used as pepper spray] it is actually an inflammatory treatment," she says.

Pepper spray's also not specific to law enforcement use—the agent can be used as personal defense for the average person (though some state and local governments have specific laws on who can buy it and how much of the active ingredient it can contain).

What does pepper spray do to the body—and why does it hurt so much?

Contact with pepper spray results in an immediate, burning pain—specifically a burning, tearing, and swelling of the eyes, according to the National Criminal Justice Reference Service (NCJRS). Basically, everywhere hurts. "You'll feel it in your skin and eyes, and the sensation lasts about 30 minutes," Natasha Bhuyan, MD, an Arizona-based physician at OneMedical, tells Health.

Past that, when pepper spray is inhaled, the respiratory tract becomes "inflamed, resulting in a swelling of the mucous membranes lining the breathing passages and temporarily restricting breathing to short, shallow breaths," per the NCJRS. "We produce more mucus in our lungs, as an inflammatory response against the spray,” adds Dr. Bhuyan.

For people with healthy lungs, this may not be a huge issue, but if you have any chronic lung issues such as asthma or COPD, then pepper spray can be much more serious. "If you have any type of airway inflammation already, or any type of lung issues, [pepper spray] can cause bronchospasms,” warns Dr. Pena. Those bronchospasms, according to the American Academy of Allergy, Asthma & Immunology, are essentially a tightening and narrowing of the breathing airways, which can be exceptionally dangerous for those with respiratory issues or lowered lung capacity.

Pepper spray's impact on the lungs is especially problematic with COVID-19 still circulating. While there's no known research as to how much pepper spray can affect those infected with or recovering from COVID-19, it's best to avoid it at all costs if you've been ill recently. "If you are a [COVID-19] survivor, in the healing and recovery stages, you should NOT be protesting,” advises Dr. Pena, “we just don’t know what can happen to [COVID-19] carriers and survivors if they come into contact with pepper spray."

How to protect yourself from pepper spray—and what to do if you are exposed to it.

Both Dr. Pena and Dr. Bhuyan recommend being as prepared as possible in case you are exposed to pepper spray. “Prevention is really key when it comes to protesting,” says Dr. Bhuyan, “there are some things you can do to better prepare yourself for contact [with riot control agents].” To that end, both doctors recommend the following steps to help protect yourself and prepare for pepper spray exposure:

Dr. Bhuyan also urges protesters to observe their surroundings, “you may be able to spot when law enforcement is about to deploy pepper spray or any other riot control agents.” If you suspect that aerosol-based irritants will be deployed, get out of the way, if possible.

If you do find yourself on the other end of a pepper spray canister, the CDC—along with Dr. Pena and Dr. Bhuyan—say there are actions you should take immediately following exposure:

Unfortunately, I wasn't so lucky to have this information before my encounter with pepper spray (in fact, I did everything you're not supposed to do). The pain luckily subsided after about an hour—but, like I said earlier, it felt as though it took forever to get there.

That's why I'm sharing this information now: I'm urging anyone who chooses to go out and protest right now to please take the proper protective precautions, keep your mask on, and follow social-distancing regulations as much as possible.

As for me, I've never regretted my decision to protest—even though it ended with me being pepper-sprayed. The protest brought about some (though still not enough) justice for Grant: Mehserle, his murderer, was found guilty of involuntary manslaughter and was sentenced to two years in prison for his crimes. 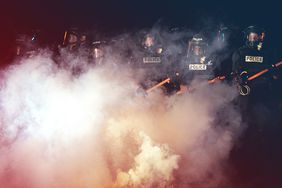 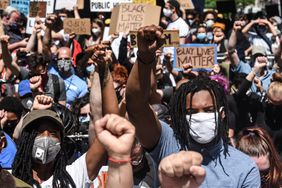 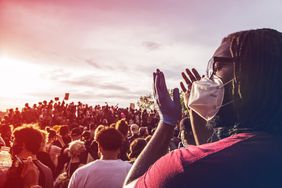 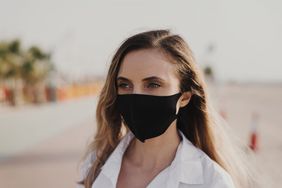 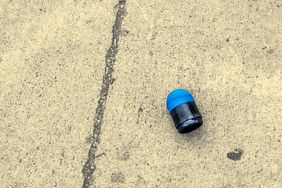