He suffered terrible chronic headaches before a doctor did a scan and saw something weird.

Typically, a headache isn't anything to worry too much about. It's probably caused by alcohol, lack of sleep, skipping meals, or stress, and you'd never thing a parasite was behind the pain. But that's exactly what was going on with an Austin, Texas man known as "Gerardo," who told local TV station CBS 21 he'd been suffering from headaches that were so intense he vomited and even passed out.

Gerardo finally sought medical attention, and neurologist Jordan Amadio, MD, from Dell Seton Medical Center in Austin, carried out a brain scan and found a 4 centimeter mass near his brain stem, according to the CBS 21 report. After ruling out a tumor, Dr. Amadio realized the mass was a "pretty big" tapeworm—a diagnosis that turned out to be a little bit more serious than a really bad hangover.

If you're not familiar with tapeworms, here's some background. These flat worm parasites like to set up home in the intestines of people and animals. In the US, the most commonly occurring species is a tapeworm called Taenia solium, also known as pork tapeworm, according to the Centers for Disease Control and Prevention (CDC).

Gerardo believes he caught the infection (medically known as neurocysticercosis) from eating undercooked pork while he was in Mexico 10 years ago. That's a long time for the parasite to live in his brain, but it's actually not surprising. Dr. Amadio told CBS 21 that if you accidentally eat a microscopic egg from the tapeworm larva, it can go undetected for years. If it takes up residence in the GI tract, it can then travel to the liver, lungs, or brain.

Thankfully, Gerardo is expected to make a full recovery. But doctors told CBS 21 the tapeworm and its larvae could have killed him. Sadly, that's what happened to an 18-year-old Indian man last year. He went to the emergency room after suffering seizures, and doctors discovered he had parasites in his brain. He was given anti-seizure medication and steroids, but he died two weeks later.

According to the CDC, neurocysticercosis is the most severe form of parasitic infection, resulting in significant illness in those who are infected. To make matters worse, it's often poorly understood by doctors.

The good news––if there is such a thing, when it comes to parasitic infections that make your skin crawl when you think about them––is that tapeworms are actually generally at home in the human body. This means fully-grown worms don't tend to cause any symptoms at all, and when they do, it's usually a stomachache or diarrhea.

Many people never even realize they've got a tapeworm in their body, Peter Jay Hotez, PhD, MD, dean of the national school of tropical medicine at Baylor College of Medicine in Houston, Texas, previously told Health.

"[Tapeworms] have a normal life cycle," Dr. Hotez said. "They can live for up to a few years and then they die." The body then passes the tapeworm or it is absorbed by the intestines. 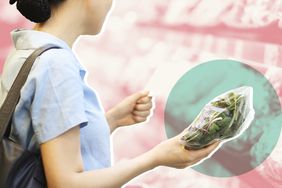