FYI: Allyship isn't a permanent status you receive. It's a continual process.

The path to being an ally looks different for everyone. The work involved can include activities as diverse as participating in a parade, putting a bumper sticker on your car, and taking steps to make sure your workplace is as LGBTQ+-friendly as possible.

In the broadest of terms, Merriam-Webster defines an ally as "one that is associated with another as a helper: a person or group that provides assistance and support in an ongoing effort, activity, or struggle." But allyship goes deeper than that, Samantha Busa, PsyD, clinical director of the Gender and Sexuality Service at NYU Langone Health's Department of Child and Adolescent Psychiatry, tells Health. While being an ally absolutely hinges on support and advocacy for an underrepresented group they don't belong to, its' also important to acknowledge that it's a lifelong process in holding yourself and those around you accountable. "Allyship is learning how to be comfortable with being uncomfortable," Dr. Busa says.

Though it's easy enough to practice allyship in theory—knowing right from wrong, and what you would do in certain situations, should they arise—it's a bit harder to put being an ally into practice in your daily life. Here, experts in the LGBTQ+ community advise how you can be an ally every day, and explain the concepts and ideas you need to keep in mind to truly act as one.

1. Get To Know LGBTQ+ Members of Your Community

It's highly likely that most people have at least one person in their inner circle who identifies as LGBTQ+—but getting to know even more members of the community is a good first step to becoming an ally, James Hekman, MD, LGBTQ+ health specialist and medical director of Cleveland Clinic's Lakewood Family Health Center, tells Health. But—and this is key—it's important to do it in a genuine way.

How can you make sure you're doing that? Focus on what feels natural—that means avoiding talking only about your undying love for Queer Eye around anyone who identifies as LBGTQ. While your instinct might be to connect with the person you're speaking to by finding common ground, it shouldn't only focus on LGTBQ+ culture. "I think the impulse people have is to try to break that awkwardness [by] sharing some interest. That is counterproductive," Dr. Hekmansays.

Instead, try focusing on the person you're building a relationship with, not their gender or sexuality. "If you know a member of the LGBT[Q]+ community, get to know that person beyond the LGBTQ+ status," Dr. Hekman says. "Ask about areas of their life not related to LGBTQ+ areas." Basically, just treat LGBTQ+ individuals just as you'd treat a person who identifies in the same way you do.

Sometimes, being an ally means reading the news, Caroline Salas-Humara, MD, medical director of the Transgender Youth Health Program at NYU Langone's Hassenfeld Children's Hospital, tells Health. It's going to be tough to be an ally for the LGBTQ+ community if you don't understand the challenges the community as a whole is facing.

Outside of credible news websites, you read daily, you can also turn to certain specialized organizations for help educating yourself, Dr. Hekman says. Among these are Health Professionals Advancing LGBTQ Equality (previously called the Gay & Lesbian Medical Association) and the Human Rights Campaign (HRC), Dr. Hekman says, also citing the HRC's Healthcare Equality Index as a specific tool you can use to familiarize yourself with issues affecting the LGBTQ+ community. Another organization you can turn to for helpful information is the World Professional Association for Transgender Health (WPATH), Dr. Hekman says.

Once you've done your research, look into which policy leaders in your community—and on a national level—are actively trying to help the LGBTQ+ community, Dr. Salas-Humara advises. Then use that information: "Get out there and make your voice heard," she adds.

3. Ask Questions of Yourself and Others

Asking questions, in general, is a major part of being an ally. That said, a few questions are absolutely critical. Among them is which pronoun you should be using for the person you're speaking to. Even if you *think* you know the pronouns someone prefers but you're not 100% sure, your best bet is to simply ask, Dr. Hekman says, explaining that this is a problem specific to the transgender community. "When in doubt, ask," he says.

Another way to respectfully show your allyship is to ask to be called out. If you're worried you might accidentally use the wrong pronoun for someone, tell them to correct you if you do. This can be as simple as saying, "If I slip up, please let me know," Dr. Hekman says. Another basic question to ask to make sure you're supporting LGBTQ+ individuals to the best of your abilities is "How can I be helpful?" Dr. Salas-Humara says. She adds that when you find out someone identifies as LGBTQ+, you might want to ask them who else knows this information, so you don't accidentally out them to people they haven't come out to.

This aspect of allyship also entails asking questions of yourself, Dr. Busa says. "Allyship is a broader concept of being someone actively confronting biases," she explains. This means consistently questioning stereotypes that are baked into society and reevaluating your own values to make sure they align with allyship. A good question to start with could be: "Have there ever been times where I haven't been able to see myself represented in the media?" Dr. Busa says. If you're straight, the answer is likely no. Thinking about these issues can give you a better understanding of just how much bias the LGBTQ+ community fights daily.

While asking questions to better inform yourself is essential, it's just as important to listen, experts say. If you're doing all the talking, you won't hear what the LGBTQ+ community actually needs in their own words.

Additionally, by refusing to listen, you keep the emphasis on yourself—which is exactly where it shouldn't be when you're trying to learn more about a community you're not a part of. Unfortunately, this essential part of allyship often goes unchecked: "I think what we always forget is to listen," Dr. Salas-Humara says. This means giving people space to speak about whatever's on their minds. Dr. Hekmen echoes this advice, explaining that a large part of getting to know someone well is listening to them.

If you take a look around you—at work, on committees, in extracurricular activities—and you are surrounded by people who look like you, it's important to start helping make changes. Dr. Salas Humara says urges you to question yourself here, too: "Where you work, the communities you associate yourself with, clubs you're a part of—[is] there LGBTQ+ representation?" If the answer is no, you can advocate for representation in all of those spaces.

This element of figuring out who's missing from certain groups within society—and making sure you promote their voices—is a crucial element of allyship. It's wildly unfair to put the burden of equal representation entirely on LGBTQ+ people, and Dr. Busa explains that one way to prevent this is to speak up on behalf of LGBTQ+ people when necessary. There's a "tremendous amount of burden" associated with educating others, she says, adding that using your own voice to help with that education process is a useful way to be an ally.

What Is Sexual Fluidity?
23 LGBTQ+ Pride Flags and What They Represent 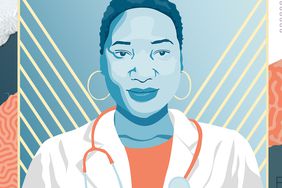