Thurston, now 30, opened up about her scar in a new Instagram Story.

Katie Thurston is under the microscope while looking for love on The Bachelorette, and she shared in an emotional Instagram Story post that she's gotten a lot of questions about a scar on her chest, which is visible in a few of her other Instagram photos.

"I often get questions about my scar," she wrote, before explaining that it's from a lumpectomy after finding a lump in her breast. "Because I was only 20, I discovered this on my own," Thurston, now 30, continued. "Typically, women don't get routine mammograms until their 40s, so it's important to be your biggest advocate when it comes to your own personal health."

Thurston then took the opportunity to "highlight" the L4 Project, which former Bachelorette contestant Michael Allio founded as a way to carry on his late wife Laura's legacy.

Thurston included a snapshot of the L4 Project's mission, which says that it works "to enrich the lives of people and families battling cancer by supporting organizations that provide financial, experiential, emotional and other assistance during times of hardship."

Michael's late wife, Laura Allio, was diagnosed with breast cancer in April 2017, and began sharing information about her journey on social media, according to the L4 Project. Laura died from the disease in 2019, and the foundation works to help continue to spread her advocacy work.

Only a portion of the breast is removed with a lumpectomy. While it is a treatment option for early-stage breast cancer, it can also be used to rule out a cancer diagnosis, the Mayo Clinic says. (Thurston didn't reveal whether she was diagnosed with cancer or if the lump was benign.)

The American Cancer Society (ACS) does not recommend regular breast self-exams as part of a routine breast cancer screening schedule, but the organization also says that this doesn't mean they shouldn't be done. The ACS specifically says that women who are at a higher-than-average risk for breast cancer may want to do regular breast self-exams, as well as have their doctor examine them regularly. "But it's important to understand that there is very little evidence that doing these exams routinely is helpful for women at average risk of breast cancer," the ACS says.

6 Women on What Their First Mammogram Really Felt Like

The best time to do a breast self-exam is about three to five days after your period starts (your breasts aren't as tender or lumpy then), the US National Library of Medicine's MedlinePlus resource says.

Here's how it works:

According MedlinePlus, there are two goals to breast self-exams: to get used to how your breasts feel, and to be able to detect anything new or different. If you do feel something unusual during a self-exam, call your ob-gyn right away for a more thorough exam. 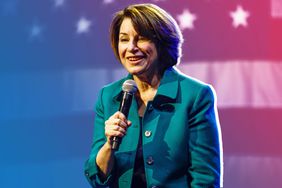