The manufacturer found that dry shampoos and conditioners, packaged in aerosol cans, had a presence of benzene.

Korin Miller
Korin Miller is a freelance writer specializing in general wellness, sexual health and relationships, shopping, and lifestyle trends, with work appearing in Women’s Health, Self, Prevention, Forbes, Daily Beast, and more. As a health journalist, Korin has reported heavily on everything from COVID-19 to mental health, with a little of everything in between.
health's editorial guidelines
Medically reviewed by
Mary Choy, PharmD

In December 2021, Procter & Gamble, commonly known as P&G, issued a voluntary recall of select dry shampoos and conditioners over the presence of benzene. Benzene is a chemical known to cause cancer.

P&G distributed the recalled products nationwide and, upon releasing the recall, asked retailers to remove them from shelves. The company also offered to reimburse consumers if they had purchased the products.

The company decided to test all its aerosol products after reports found traces of benzene in other aerosolized products at that time, including certain antiperspirant sprays from P&G.

"Nothing is more important to us than the safety of the consumers who use our products and the quality of the products we ship," said representatives from P&G. Ultimately, the recall came "out of an abundance of caution."

Here's what you should know about the P&G recall—including how some products could become accidentally contaminated with benzene and why using products with benzene can be dangerous.

Benzene is a chemical that can be colorless or light yellow at room temperature. Also, benzene has a sweet smell and is highly flammable.

The chemical, which evaporates quickly into the air and dissolves slightly in water, is formed from natural processes like volcanoes and forest fires. Benzene is also a natural part of crude oil, gasoline, and cigarette smoke.

People can use benzene to make other chemicals that make plastics, resins, nylon, and synthetic fibers. It's also used to make some lubricants, rubbers, dyes, detergents, drugs, and pesticides.

Why Is Benzene Bad for You?

At certain levels, benzene prevents your cells from working correctly. Benzene can also prevent your bone marrow from making enough red blood cells, which may lead to anemia. The chemical can also damage your immune system by changing antibodies in your blood, damaging your white blood cells.

If you have long-term exposure to benzene, meaning one year or more, the chemical can raise your risk of developing leukemia. Leukemia is a cancer of the blood and bone marrow.

Benzene, a Known Carcinogen, Was Found in 78 Batches of These Popular Sunscreen and After-Sun Products

How Does Benzene Get Into Dry Shampoo and Conditioner?

Benzene is not an ingredient regularly found in those dry shampoos and conditioners. But P&G said that the company's review "showed that unexpected levels of benzene came from the propellant that sprays the product out of the can."

Jamie Alan, PhD, associate professor of pharmacology and toxicology at Michigan State University, told Health that benzene typically ends up in those products "some way in the manufacturing process."

What To Do if You Used One of Those Products

If you used one of the products recalled by P&G, or any other product recalled over benzene exposure, you shouldn't panic, Edward W. Boyer, MD, PhD, professor of emergency medicine at The Ohio State University Wexner Medical Center, told Health.

P&G echoed that sentiment in its recall notice, saying, "Based on exposure modeling and the cancer risk assessments published by the Environmental Protection Agency (EPA), daily exposure to benzene in the recalled products at the levels detected in our testing would not be expected to cause adverse health consequences."

If you use products like the ones recalled by P&G the way you're supposed to, meaning every once in a while to help you freshen up your hair, "the greatest likelihood that will happen is you will wind up with clean hair," said Dr. Boyer.

But given that you're spraying the product around your head, there's a risk of breathing in benzene.

The Centers for Disease Control and Prevention (CDC) warns that people who breathe in high levels of benzene may develop specific symptoms within minutes to several hours, including:

However, the amount you might accidentally breathe in using a dry shampoo or conditioner is minimal. Overall, Dr. Boyer said that you shouldn't panic if you've used one of those products in the past.

"You're not exposed to that much," said Dr. Boyer. "This sort of recall is done more for risk perception and to make sure the company's risk is minimized rather than actual risk."

In December 2021, P&G issued a recall over some of their brands' haircare products being exposed to benzene. Some products are exposed to cancer-causing chemicals like benzene during the manufacturing process.

If you used one of the affected P&G products, or any other product exposed to benzene, don't worry too much, according to Dr. Boyer. You need to breathe in excessive amounts of the chemical to experience symptoms. 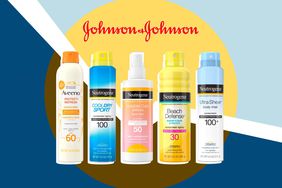