In fact, it seems the company may have known for a while.

People have openly talked for years about how Instagram isn't really great for body image in teens—or even adults. But now, it seems, the powers that be behind Instagram have been aware of this, too.

Facebook, which owns Instagram, shared in a 2019 presentation of corporate data obtained by The Wall Street Journal, that it's conducted years of in-depth research and found Instagram isn't helpful for teens' mental health. "We make body image issues worse for one in three teen girls," one slide from the presentation said.

"Teens blame Instagram for increases in the rate of anxiety and depression," another read. "This reaction was unprompted and consistent across all groups."

The WSJ also shared corporate Facebook data from 2020 that found that 32% of teen girls said that when they "felt bad about their bodies, Instagram made them feel worse," adding that "comparisons on Instagram can change how young women view and describe themselves."

Even more disturbing, the company shared data that found that, among teens who said they had suicidal thoughts, 6% of Instagram users in the US blamed the social media platform.

A publicist for Facebook has not yet responded to Health's request for comment (we'll update when and if they do). However, Instagram responded to Health and directed us to the blog post that head of public policy, Karina Newton, wrote in response to the WSJ story on Tuesday, in which she noted that the company is trying to steer people away from posts that promote poor body image or bullying.

"We're exploring ways to prompt [users] to look at different topics if they're repeatedly looking at this type of content," she said. "We're cautiously optimistic that these nudges will help point people towards content that inspires and uplifts them, and to a larger extent, will shift the part of Instagram's culture that focuses on how people look."

There's other research out there that has suggested Instagram isn't great for mental health in teens in the past. A British study from the Royal Society for Public Health published in 2017 surveyed 1,479 young people between the ages of 14 and 24 on the impact of social media on their lives and found that Instagram had the most negative impact on young people out of Instagram, Facebook, YouTube, Snapchat, and Twitter.

Another study by the Pew Research Center that was published in 2018 found that 45% of teens feel overwhelmed by the drama on social media and 43% feel pressure to only post content that will make them look good to others.

Thea Gallagher, Psy.D., a Philadelphia-area psychologist and co-host of the Mind in View podcast, tells Health that it's "not shocking" that Instagram has a negative impact on teens' mental health. "There are body image concerns, social comparisons—it looks like everyone is doing more and having more fun than you," she says. "Just comparing yourself to other people can be really harmful."

Additionally, clinical psychologist John Mayer, Ph.D., author of Family Fit: Find Your Balance in Life, tells Health that Instagram and other social media platforms also pull teens away from real-world experiences that can help them build crucial skills to cope with life's stressors. "It presents an artificial coping mechanism for teens to learn and develop the skills that are critical to successful adult development," he says. "By spending long periods of time on this platform, they are kept away from other essential activities that are vital in development, such as live peer socialization, a variety of activities, physical activity, the arts, developing mastery skills and more."

Platforms like Intsagram also "provide a plethora of bad information on coping with life and life skills," Mayer says, noting that it can even "lead to social conflict between teens." However, Gallagher says that the issue is "complex," and points out that "we're not going to be able to stop the juggernaut that is Instagram and Facebook."

She also notes that Instagram and other social media platforms aren't all bad, and the mental health benefits of social connection (perhaps especially during a period of social isolation, like a pandemic) can be helpful, but that parents need to be careful about their teen's social media use. "You're probably not going to be able to keep your [child] from Instagram or Facebook, but you can have conversations about self-worth, body image, values, and goals—what's important to them as a person," she says.

Gallagher suggests stressing to teens that what they see on social media is "curated" parts of people's lives, and noting that they probably also curate what they post. "It's not the whole story," she points out. You can also limit the amount of time your teen spends on social media platforms, Mayer says.

As for body image in particular, Gallagher recommends having open conversations with teens about what is and isn't realistic for most people's bodies. And, she says, "it's important to stress that there is more to us than how we appear on Instagram." 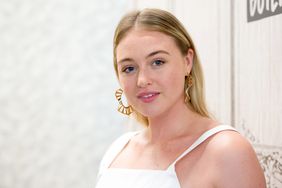