Deja vu. It's that feeling that you've been there, done that already—and yet, you know you haven't. Researchers believe there are some logical causes of this weird sensation.

You know that feeling you get when you step inside a new house or walk around a foreign city—places you know you've never been before—and you can't help but think, I've done this already? It's déjà vu, and if you've never had it before, take it from us: It's kind of creepy.

Déjà vu is French for "already seen," and while it's difficult to pinpoint how many people have experienced the phenomenon, according to a 2021 study published in the journal Epilepsy & Behavior, about two-thirds of the population have experienced it.

According to the Cleveland Clinic, déjà vu is more likely to happen to people between the ages of 15 and 25 years of age. People with more education, people who travel a lot, and people who can recall their dreams are also more likely to experience déjà vu.

But despite being fairly common, "it's not a widely studied subject," said Alice Medalia, PhD, a professor of medical psychology at Columbia University Medical Center. Because déjà vu is a subjective experience and is difficult to induce in research subjects, testing the theories behind it can be tricky.

That said, researchers have a few theories about why we experience déjà vu (and no, it's probably not flashbacks to a previous life).

You've Seen Something Similar Before

Some researchers believe déjà vu is triggered when you enter an environment similar to one you've experienced in the past. For example, you could experience it when you enter a hotel lobby where the furniture is configured the same way as your childhood home's living room.

17 Ways to Age-Proof Your Brain

To test this theory, researchers from the same 2021 study published in Epilepsy & Behavior had participants go through virtual tours, some of which had similar layouts. For example, a virtual shopping mall might have the same layout as a previously-toured virtual lodge, so when they were moving through the scenes, using similar series of turns, participants felt like they had already "been there."

Some people feel like they can predict things with their déjà vu. But according to research published in 2018 in the journal Memory, researchers believe that the feelings of premonition are probably just really strong feelings of familiarity that are being interpreted as predictions during déjà vu events.

Something's Up With Your Brain

Some people who have temporal lobe epilepsy (a type of epilepsy that occurs in the part of their brain that handles short-term memory) experience déjà vu right before they have a seizure.

It could be argued that this is another sign that the phenomenon may be connected with the way memories are activated since memories are stored in the temporal lobes of our brains. Plus, it's why some experts think déjà vu is triggered by a kind of disruption in the firing of neurons in the brain, said Dr. Medalia.

It could also be the result of your brain struggling to process multiple pieces of information, but for some reason, can't align them correctly, added Dr. Medalia. That lack of "synchrony" might be responsible for that déjà vu feeling.

When Is Déjà Vu Cause for Concern?

Having déjà vu is a typical experience, even if scientists don't yet know exactly why it happens.

But according to the Cleveland Clinic, if you're experiencing déjà vu several times a month and it's accompanied by weird dream-like memories; or if you lose consciousness and/or experience symptoms like a racing heart, fumbling around, or unconscious chewing with your déjà vu episodes, then it's cause for concern.

These could be signs of epilepsy or another neurological disorder, so consult a healthcare provider for an evaluation.

As long as you don't have these symptoms accompanying your déjà vu moments, your déjà vu is probably just your brain's way of processing memories.

How to Tell the Difference Between Normal Age-Related Memory Changes and Dementia
Is This Shoe Pink or Gray—and Can Your Answer Really Tell You Anything About Your Brain? 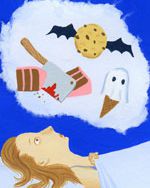