It's called acute disseminated encephalomyelitis (ADEM), and here's what you should know about it.

An 8-year-old girl in Minnesota named Avella Bauer has been in the hospital since March after developing a rare disorder on the heels of a COVID-19 infection. Bauer was diagnosed with acute disseminated encephalomyelitis (ADEM) after she tested positive for COVID-19.

Her mother, Lani Bauer, told NBC News that she developed a low-grade fever in early March and, while the fever broke later in the week and Avella was able to return to school, Lani soon realized her daughter wasn't acting like herself.

"I got a phone call from her after school care saying I had to come get her because she wasn't herself and she was sleeping in one of their little rooms," she said. On Saturday morning, Lani discovered that Avella was unresponsive and rushed her to the hospital. There, providers ran several tests, during which she tested positive for COVID-19 and was also diagnosed with ADEM. She is now paralyzed and has been hospitalized ever since.

Obituary of Candace Ayers, 66, Blames Unvaccinated People For Her Death from COVID-19

ADEM is a condition that causes a brief but widespread attack of inflammation on the brain and spinal cord, according to the National Institute of Neurological Disorders and Stroke (NINDS). This attack damages the myelin, the protective covering of nerve fibers, and can lead to sudden symptoms like fever, fatigue, headache, nausea, vomiting, seizures, and coma.

The disorder can cause neurological issues, including:

A GoFundMe set up for Avella says that she has "extensive" damage to her brain and spinal cord. "Typically with ADEM, there is about a 70% chance of total recovery," the first update on the page says. "However, her case is so extreme her outcome will be unknown for quite a while."

The GoFundMe explained that the only antibody that came back positive for an unknown infection before Avella developed ADEM was COVID-19, though it acknowledges they can't say with total certainty that's what caused it. "What happened was, once the antibody fighting the original infection (COVID was gone, it got confused and attacked her nervous system (brain)—thus ADEM occurred," it said. "There is no way to say 100% that the COVID was the original infection, but through all the findings it is what makes the most sense. It likely played a role in the extreme severity of it as well."

Thomas Russo, MD, professor and chief of infectious disease at the University at Buffalo in New York, tells Health that it can be difficult to pinpoint the exact cause of ADEM. "It's certainly possible that it could be caused by COVID-19," he says. "However, it's very difficult to be absolutely certain."

Other experts agree that while it's a possibility the two are linked, it's hard to know for sure. Infectious disease expert Amesh A. Adalja, MD, a senior scholar at the Johns Hopkins Center for Health Security, tells Health, "ADEM can be caused by various infections such as influenza, hepatitis viruses, other respiratory viruses, and bacteria like mycoplasma," he says. "I do think it's possible that SARS-CoV2 could cause ADEM, as other respiratory viruses can do this." However, Dr. Adalja continues, "This appears to be a rare occurrence and not part of the general course or infection to expect, especially in children who are generally spared the severe consequences of infection."

William Schaffner, MD, an infectious disease specialist and professor at the Vanderbilt University School of Medicine, tells Health, "This is, fortunately, a rare event, but it could happen. I don't think it's something that people in general have to be worried about, but doctors must know about this."

And while ADEM is rare, Dr. Russo urges parents to be vigilant about COVID-19 and keep up all safety precautions, including masking and frequent hand-washing. "Parents are focusing mostly on if the children get infected, the likelihood that they will and in the hospital," he says. "But we don't know about the intermediate and long-term effects of this virus, including possible effects to the heart and other organs. The best strategy is not to get infected."

Additionally, Lani is urging people to get vaccinated and follow other COVID-19 prevention strategies. "If getting the shot and wearing your mask is one step closer to preventing this to happen to another child, that's what I want to stress," she said. 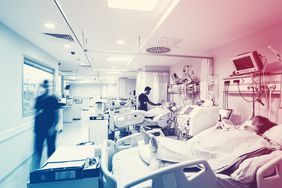 This 23-Year-Old Nurse Was Left Paralyzed After COVID-19 Triggered a Rare Neurological Disease
How Does COVID-19 Affect the Brain?

Experts Explain Why It’s a Bad Idea to Purposely Get COVID Since Omicron Seems Milder
1 in 3 People Who Survive COVID-19 Are Left With ‘Brain Disease’ or Psychiatric Disorders, Says New Study