Cooling Centers Can Save Lives During Heat Waves—Here's What to Know, and How to Find One Near You

Recent record-high temperatures have prompted some states to open up new cooling centers to help residents beat the heat.

The Pacific Northwest continues to struggle under a heat dome that has caused skyrocketing temperatures for most of this week. Seattle saw temperatures ramp up to 107 degrees Fahrenheit on Monday, and Salem, Oregon, hit 117 degrees.

Eastern Washington and Oregon are still under heat advisories through the weekend, according to CNN, and hundreds of deaths have been reported throughout the Pacific Northwest and Canada. High temperatures are also spreading east. And, given that there are several months of summer left, it's likely we'll see more heat waves in the future.

Public health officials across the country have encouraged people to visit so-called cooling centers as temperatures soar. In Seattle, Amazon opened its 1,000-person capacity meeting center to the public as a spot where members of the public could get relief in air conditioning. (Many people in the Northwest don't have air conditioning because temperatures rarely get this high, CNN points out.)

As heat waves crop up across the country, other local governments are also encouraging residents without AC to visit cooling centers. The city of Baltimore opened cooling centers to the public this week and New Jersey has offered up a list online of cooling centers.

If you've never heard the term "cooling center" before this week, it's understandable that you'd have questions about what these are and why they're important. Here's what you need to know.

7 Ways to Stay Cool in the Heat, According to Experts

What is a cooling center?

The goal of a cooling center is to help prevent heat-related illnesses, which include heat cramps, heat exhaustion, and heat stroke. "Exposure to several days of extreme heat, sometimes called heat waves, has a potential to cause a large number of deaths in a short time period," the CDC says, noting that, during some years, heat waves cause more deaths in the US than any other weather-related disaster.

7 Heat Exhaustion Symptoms You Should Never Ignore, According to Doctors

Who benefits from cooling centers?

Anyone who is without air conditioning can benefit from a cooling center, Michael Billet, MD, an emergency room physician at Mercy Medical Center in Baltimore, Md., tells Health. "It's usually people who don't have a reliable cooling situation in their own home," he says.

The CDC specifically notes that certain people are more likely than others to suffer from heat-related illnesses, including:

Why are cooling centers important?

People can develop hyperthermia (a condition where your body temperature reaches dangerously high levels) in extreme heat, Scott Kaiser, MD, a board certified geriatrician at Providence Saint John's Health Center in Santa Monica, Calif., tells Health. "It's devastating that people die whenever we have these heat waves," he says. "It's also one of the most striking examples of the way poverty has such a profound impact on health, wellbeing, and health disparities."

A cooling center can allow people to get relief in air conditioning and ultimately lower their risk of developing a heat-related illness, Dr. Billet says. Dr. Conroy agrees. "By avoiding the extreme temperatures during the day, people can often avoid some of the dangerous effects from heat," he says.

How to find a cooling center near you

There isn't one website that shows everyone across the country where to find a cooling center. Instead, you'll need to consult your local health department to find one near you. Many list cooling centers, their phone numbers, and addresses online to help you get to a center ASAP.

If you're without air conditioning and temperatures are high in your area, experts say it's important to take advantage of cooling centers near you. "Excessive heat is dangerous for individuals, especially the elderly and those with chronic medical conditions," Dr. Conroy says. "It is important to utilize cooling centers when available if you do not have access to air conditioning to avoid the health issues associated with extreme heat." 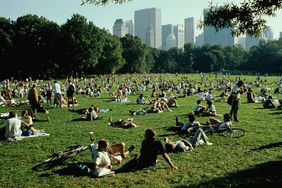 What to Know About the 'Heat Dome' Settling Over Much of the U.S.