BBLs are increasing in popularity and showing up all over Twitter right now.

Brazilian butt lift surgery (or BBL in shorthand) has become one of the fastest-growing cosmetic surgery procedures in recent years. And lately, there have been plenty of TikToks from people showing off the results of their BBL lift.

Other TikToks show people excited to go under the knife. But what exactly is Brazilian butt lift surgery—and what are the risks? Here's what you need to know.

What is Brazilian butt lift surgery?

Brazilian butt lift surgery, aka "gluteal augmentation" or "gluteal enhancement," is a procedure that's designed to give you a big, round booty and change the contour, size, and/or shape of the buttocks, Alexis Parcells, MD, plastic surgeon, owner of Parcells Plastic Surgery in New Jersey and founder of SUNNIE Wrinkle Reducing Studio, tells Health. This surgery can also can slim out other parts of your body in the process.

RELATED: Chrissy Teigan Reveals She Had a Boob Job and Opens Up About Struggling With Body Image

This fat-grafting surgery starts with liposuction, aka removing fat from your stomach, thighs, or back, New York-based Stafford Broumand, MD, a plastic surgeon at 740 Park Plastic Surgery, tells Health. The surgeon will then "transfer the fat to the rear to create a fuller and curvier shape," Dr. Broumand says.

Just to be clear, a Brazilian butt lift isn't the same as getting butt implants, which are silicone implants surgically placed into the tissue of the buttocks, according to the American Society of Plastic Surgeons. Nor is the butt actually "lifted."

How much does BBL cost?

Is it safe to have a Brazilian butt lift?

It depends. Some people are traveling abroad to get BBL at a lower cost, but that can mean less regulation and a higher risk of complications.

How risky BBL surgery is also depends on how much fat you're having transferred, Dr. Broumand says. "The risk increases as the volumes of fat transferred to the buttocks increases," he says. "When too much fat is transferred, there are a myriad of issues that arise." Those can include:

Brazilian butt surgery has a higher complication and death rate

4 Things to Think About Before You Get a Breast Reduction

Specifically, you can develop what's known as a "fatal fat embolism," Dr. Parcells says. This means that your doctor can mistakenly inject fat directly into the veins in your butt instead of under your skin, causing the fat to go into your bloodstream and then your lungs, Dr. Lahijani says. From there, it can form a blockage and eventually kill you. "In every patient who has died, at autopsy, fat was seen within the gluteal muscle," Dr. Parcells adds. But fat hasn't been found only under the skin, where it should be.

Brazilian butt lifts are performed by doctors around the country, and plenty of people have seen success with it. If you decide this is a surgery you want to have, just check your doctor's credentials (make sure the doctor is a board-certified cosmetic surgeon) and success rate in advance. "It can be done safely in the right hands," Dr. Lahijani says. 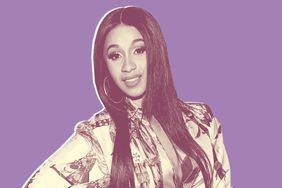 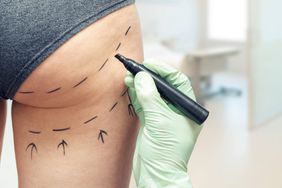 This Rare but Deadly Complication of Liposuction Almost Killed a Woman. Here's What Doctors Want You to Know 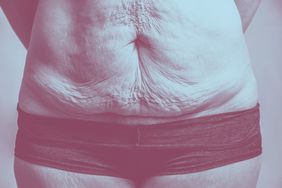 How to Get Rid of Excess Skin After Weight Loss