Radiation comes from natural sources and manufactured products. Here are ways to minimize your risk of being exposed to radiation.

Health.com Editorial Team
Health.com Editorial Team
The editors at Health are a dedicated team of experienced health editors, writers, and other media professionals who strive to bring trustworthy and responsible health and medical content to their readers. As a team, we have decades of experience in health journalism and have worked at legacy publishers and some of the biggest news and media companies in the U.S.
health's editorial guidelines
Medically reviewed by
Steffini Stalos, DO

Radiation is energy that exists in several forms, some harmful and some less harmful. Radiation travels through space at the speed of light; its sources can be natural (like sunlight) or human-made (like nuclear reactors). Either can be harmful in large quantities by damaging the DNA in our cells, which can lead to cancer or organ failure, according to the Centers for Disease Control (CDC).

Most people are typically exposed to about 620 millirems (mrem) of radiation per year, according to the U.S. Nuclear Regulatory Commission (NRC). Nearly half of that comes from natural (known as "background") sources, mostly radon in the air outdoors. The other half comes from human-made sources, with the most significant amount usually coming from medical procedures like X-rays.

Trace amounts can also come from consumer products like televisions and cellphones. Disasters like nuclear power plant accidents and nuclear weapons testing can result in dangerous levels of exposure to the public in a short time frame.

The amounts listed are based on the EPA's Calculate Your Radiation Dose online calculator. Knowing how much different sources are responsible for can help you realistically navigate your risk and learn to avoid exposure to more radiation than necessary.

Most people have probably heard that tobacco contains toxins like tar, arsenic, and nicotine. It also contains two radioactive materials—polonium-210 and lead-210—according to the CDC. These materials accumulate in smokers' lungs and can lead to lung cancer.

If you smoke, quitting will help you reduce your risk. It's also worth avoiding secondhand smoke, which can also damage your lungs.

Radon is a radioactive gas released from soil, rocks, and water. It is naturally present in our outdoor air at levels so low that it's not considered harmful, according to the CDC.

But radon can get into homes and buildings through small cracks or holes and build up to dangerous levels. Indoor exposure can lead to lung cancer, according to the CDC. It is odorless and invisible, so testing is the only way you would know that it's present. The Environmental Protection Agency (EPA) has resources and information about when and how to test for radon in your home.

Medical imaging is the most significant source of human-made radiation for most people, according to the NRC. Doses vary widely, though, so your annual dose depends on your circumstances. Dental X-rays deliver about 1.5 mrem, and chest X-rays about 10 mrem. Mammograms (another form of X-ray) deliver about 13 mrem per image, and CT scans can have as many as 1,000 mrem per scan.

The benefits of imaging usually outweigh the risks, but the Food and Drug Administration (FDA) recommends taking special care to avoid over-exposure to pediatric patients due to their small size and pregnant people due to potential risks to the developing fetus.

Smoke detectors, watches, televisions, computers, fluorescent lights, and even ceramics and glass can emit traces of radiation, but in amounts low enough that they don't pose a significant risk to the public, according to the NRC.

Cell phones give off radio frequency (RF) waves. These are non-ionizing and a lower frequency than ionizing forms like X-rays. According to the CDC, there is no evidence linking cell phones to health problems, but if you're concerned, you can minimize your exposure by using a headset or earbuds when listening and talking.

Older TV sets and computer monitors containing cathode ray tubes can create low-level X-rays, but the FDA requires all TV sets sold in the U.S. to be tested to ensure they do not exceed a safe level of X-ray emission. Most modern televisions and monitors are LCD, plasma, or LED screens, so they don't produce X-rays.

Dose: 2–5 mrem for a transcontinental flight

Cosmic radiation comes from outer space and accounts for about 11% of background radiation exposure in the U.S., according to the CDC, though the amount varies by altitude. The atmosphere protects us from this radiation, so it makes sense that our exposure amplifies when we fly on a commercial airplane.

Wear a hat and use sunscreen with an SPF of 15 or higher when out in the sun, and stay in the shade as much as possible. (You've undoubtedly heard this before, but it bears repeating.) 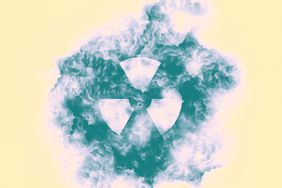 What Is Acute Radiation Syndrome? Here's What to Know About the Disease Seen on HBO's 'Chernobyl'