Celiac disease, fibromyalgia, and other ailments that are difficult to diagnose.

When you experience strange pains, mysterious digestive issues, or other unexplained symptoms, you'd hope a trip to the doctor would solve your health woes. But sometimes, doctors have just as much trouble identifying certain disorders and conditions as their patients. "A lot of symptoms are nonspecific and variable, depending on the person," says David Fleming, MD, president of the American College of Physicians and a professor of medicine at the University of Missouri. "On top of that, many diagnostic tests are expensive and aren't done routinely, and even then they don't always give us a black and white answer." The following 15 conditions are notoriously difficult to pin down.

Some conditions are difficult to diagnose because there is no real test to prove their existence; rather, they require a "diagnosis of elimination," says Dr. Fleming, as doctors rule out all other possibilities. Irritable bowel syndrome (IBS)—a chronic condition that affects the large intestine and causes abdominal pain, cramping, bloating, diarrhea, and/or constipation—is one of these cases. According to diagnostic criteria, a patient should have symptoms for at least six months before first being seen for a formal evaluation, and discomfort should be present at least three days a month in the last three months before being diagnosed with IBS.

So much confusion surrounds celiac disease—an immune reaction to gluten that triggers inflammation in the small intestine—that it takes the average patient six to 10 years to be properly diagnosed. Celiac sufferers would, in theory, have digestive problems when eating gluten-containing foods like wheat, barley, and rye, but in fact, only about half of people diagnosed with the disease have experienced diarrhea and weight loss. Celiac disease can also cause itchy skin, headaches, joint pain, and acid reflux or heartburn, and it's all too easy to blame these symptoms on other things. A blood test can diagnose celiac disease no matter what symptoms are present, and an endoscopy can determine any damage that's been done to the small intestine.

Fibromyalgia, which is characterized by widespread musculoskeletal pain, involves "medically unexplained symptoms"—a term doctors use to describe persistent complaints that don't appear to have an obvious physical cause. When doctors can't find a root cause for a patient's chronic pain and fatigue, they often settle on this diagnosis. This may involve seeing specialists and ruling out other diseases, some of which prove equally difficult to diagnose, says Eugene Shapiro, MD, deputy director of the Investigative Medicine Program at Yale University. "There are studies that show that people with certain symptoms who show up at a rheumatologist will be diagnosed with fibromyalgia, but if the same patients show up at a gastroenterologist they'll be diagnosed as having irritable bowel syndrome."

7 Things You Need to Know About Fibromyalgia
04 of 15

Unexplained aches and pains may also be caused by rheumatoid arthritis (RA), an autoimmune disorder. Unlike osteoarthritis (the "wear and tear" kind that appears as people get older), RA causes inflammation and painful swelling of joints and can occur at any age. "Early stages of RA can mimic many other conditions—sometimes it's just a sense of aches or stiffness in the joints, which could be caused by a lot of different things," says Dr. Fleming. Blood tests can help detect the presence of inflammation in the body, he says, but an exact diagnosis of RA also must take into account a patient's medical history and a doctor's careful physical exam.

8 Signs and Symptoms of Rheumatoid Arthritis
05 of 15

Another autoimmune disease, multiple sclerosis (MS) occurs when the immune system attacks the body's own nerve cells and disrupts communication between the brain and the rest of the body. Some of the first symptoms of MS are often numbness, weakness, or tingling in one or more limbs, but that's not always the case. "Multiple sclerosis can be episodic; the disease waxes and wanes," says Dr. Shapiro. Depending on the number and location of lesions in the brain, he adds, signs and symptoms may be more or less severe in different people. Once a doctor does suspect MS, however, a spinal tap or MRI can help confirm the diagnosis.

The most distinctive sign of lupus—another chronic inflammatory disease—is a butterfly-shaped rash across a patient's cheeks, but that's not present in all cases. For those who don't develop the rash, diagnosis can be a long and difficult process, says Dr. Shapiro. "Lupus can present in different ways; it can affect the joints, kidneys, brain, skin, and lungs, and can also mimic many different issues." There is no one way to diagnose lupus, but blood and urine tests, along with a complete physical exam, are usually involved. Treatment also depends on a patient's individual signs and symptoms, and medications and dosages may need to be adjusted as the disease flares and subsides.

Irregular periods, unexplained weight gain, and difficulty getting pregnant can all be symptoms of polycystic ovary syndrome (PCOS), a hormonal disorder affecting women of reproductive age. Many women with this condition also have enlarged ovaries with numerous small cysts, but not everyone with PCOS has these enlarged ovaries, and not everyone with enlarged ovaries has PCOS. To be diagnosed with PCOS, a woman must also be experiencing infrequent or prolonged periods or have elevated levels of male hormones, called androgens, in her blood. Androgen excess may cause abnormal hair growth on the face and body, but women of certain ethnic backgrounds (like Northern European and Asian) may not show physical signs.

After a Decade of Skin, Hair, and Weight Issues, I Was Finally Diagnosed With PCOS
09 of 15

You might think that an inflamed or burst appendix should be easy to identify, and often, it is: typical appendicitis symptoms include nausea, pain and tenderness around the belly button, and possibly a low-grade fever. But not always. "Some people have an appendix that points backward instead of forward in the body, so the symptoms present in a different location," says Dr. Shapiro. "And sometimes people do have pain, but then the appendix ruptures and the pain is relieved so they think they're fine." In this case, he says, intestinal fluids can seep into the abdominal category and cause a potentially life-threatening infection—but it can take days or even weeks before these symptoms appear.

Many perfectly healthy women deal with menstrual pain and discomfort, so it's not surprising that endometriosis is often misdiagnosed. However, women with endometriosis (in which uterine tissue grows outside the uterus) often report pelvic pain, cramping, and heavy bleeding that's far worse than usual, and that gets worse over time. A pelvic exam can sometimes detect endometrial tissue or cysts that have been caused by it. In other cases, an ultrasound or laparoscopy is required for a definite diagnosis.

7 Endometriosis Symptoms You Should Never Ignore
11 of 15

Hypothyroidism (also known as underactive thyroid) is a condition in which the thyroid gland produces an insufficient amount of the hormones that help regulate weight, energy, and mood. In the early stages, thyroid problem symptoms are subtle and can include fatigue, weight gain, dry skin, muscle aches, and impaired memory. "It can mimic depression, fibromyalgia, and many other conditions," says Dr. Shapiro. And because hypothyroidism is most common in people (especially women) over 60, it's easy to attribute its symptoms to simply getting older and more out of shape.

Type 2 diabetes can't stay hidden forever; if left untreated, it can cause life-threatening damage to the body's major organs. Before signs of diabetes develop, says Dr. Fleming, adults can have diabetes for years without knowing it. "There are a lot of people out there with elevated blood sugar levels who aren't getting to the doctor regularly, so they aren't getting checked for it," he says. "They won't realize it until it gets severe enough that they start developing side effects, like problems with their vision or numbness in their feet or hands." To avoid these problems, watch for earlier symptoms like increased thirst or hunger, frequent urination, sudden weight loss, and fatigue.

5 Ways to Prevent Prediabetes from Becoming Diabetes
15 of 15

There are primarily two types of inflammatory bowel disease (IBD)—Crohn's disease and ulcerative colitis. Both cause inflammation of the digestive tract, as well as pain, diarrhea, and possibly even malnutrition. Because there's no one test for IBD, however, it is diagnosed primarily by excluding everything else. "If a patient comes in with severe abdominal pain, we might first think it's their gallbladder," says Dr. Shapiro. "If he comes in with loose stools, we might think it's an infection. So we go through a litany of tests—imaging, blood tests, assessments—and sometimes we finally come down to the fact that we've ruled out every other possibility, so this is what we're going to treat you for and we'll see if it works."

10 Risk Factors for Inflammatory Bowel Disease
Was this page helpful?
Thanks for your feedback!
Tell us why!
Related Articles 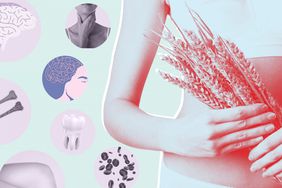 10 Symptoms of Celiac Disease You Should Know, According to Experts