In this book excerpt, the authors of "How We Eat With Our Eyes and Think With Our Stomach" explain why a fondness for chiles may be tied to your character.

Imagine you are on a date at an Italian restaurant. Like all people who harbor affection for each other, you both delight in discovering the things you have in common, such as a preference for the same wine or a passion for a certain movie. But suddenly things take a turn for the worse. Your date pours half a bottle of Tabasco sauce onto his pizza arrabbiata, offers you a slice drenched in the sauce, and goes on to enthuse about the various spicy dishes at his favorite Mexican restaurant, which you "must try soon." Until now you had actually been quite happy with the choice of restaurant, and the spaghetti carbonara on your plate is just how you like it. You were about to order your favorite dessert, panna cotta, but the prospect of sharing spicy foods with this guy in the future has put you off.

What if your unease at discovering these opposing food preferences was not unfounded? "Because what I eat, what I drink is in itself the 'second self' of my being," wrote the philosopher Ludwig Feuerbach. What does that mean for how you see your date?

These Personality Traits Are Linked to a Healthier Sex Life

Chile likers are adventurers. This conclusion came from Paul Rozin and Deborah Schiller of the University of Pennsylvania after they evaluated the first systematic study on chile ingestion. In Mexico, for example, eating chile peppers is regarded as a sign of strength, valor, and masculine attributes. It was found that American students with a penchant for chiles also had a passion for daring and potentially risky activities including fast driving, parachuting, or swimming in ice. Each of these experiences initially requires a certain mental effort to conquer one's fears, but just as with eating chile peppers, one learns to assess the risk over time. The constrained risk might just be what makes chiles so exciting for some, says Rozin.

Technically speaking, pungency is not a taste; it's not sweet, salty, bitter, sour, or umami. Hot means pain, which is why you, the careful type, automatically recoil from the offered pizza slice. The typical pain response is triggered as capsaicin, a chemical compound found in chile peppers, hits the pain receptors on the tongue. If it got into your eyes or touched the sensitive lining of your nose, as capsaicin-containing pepper spray would, you'd be doubling over and screaming in pain. So, what makes someone abuse a sensitive part of their body like their tongue with a chemical weapon and reach out for products with names such as Spontaneous Combustion, the Reaper, Mega Death Sauce (Feel Alive!), and Pain 85%, 95%, and 100%? These may sound like the names of death metal bands, but they're actual off-the-shelf hot sauces.

Some people do it for pleasure. According to Rozin, inducing this negative physical experience (accelerated heart rate, sweating, burning sensation, watering eyes, shortness of breath) is evidence of benign masochism. He compares it to watching a horror movie that makes you feel real fear despite knowing that nothing can happen to you.

You won't find anything comparable in the animal kingdom. Even pigs, who usually devour anything edible (and who, if they live in the Mexican highlands, should be accustomed to spicy leftover food from people), tend to give a wide berth to tortillas with a spicy sauce. They have no idea that the perceived heat isn't "real" but merely a misinterpretation by their brain. We, however, know that chiles won't burn us on the inside. We are intelligent enough to defy the warning signals to a certain extent. In his book Pain: A Story of Liberation, published in German, the physician Harro Albrecht writes that it is as if we triumph over a basic instinct from a safe distance and are rewarded by our brain with a biochemical treat in the form of endorphins. The same principle applies to the so-called runner's high of marathon runners.

Chile lovers are eager to try new things; willing to take risks; and hungry for variety, strong emotions, and adventures—all characteristics linked to thrill seekers. Put in a good light, this means they have a high degree of curiosity; in less friendly terms, they are easily bored.

This knowledge about your date's personality should send alarm bells ringing if you're someone who likes to play it safe. People who avoid excitement, value consistency, and generally manage perfectly well without exposing themselves to extreme situations should pay more attention to a new acquaintance's preference for hot spices in the future—even if chiles are beneficial for your health, boost your metabolism, and have an analgesic and antibacterial effect.

Excerpted from How We Eat with Our Eyes and Think with Our Stomach by Melanie Mühl and Diana von Kopp. Reprinted by permission of the publisher, The Experiment. Available wherever books are sold. theexperimentpublishing.com

Melanie Mühl is a features editor at the German newspaper Frankfurter Allgemeine Zeitung, and co-author of the paper's blog Food Affair. Diana von Kopp is a psychologist and writer for Food Affair. 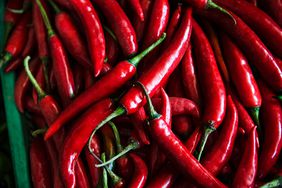 7 Health Conditions That Can Affect Your Tongue