This is how I got all my friends hooked.

Brown rice may be a staple in my vegetarian diet, but that doesn't mean the fiber-packed grain lacks shortcomings. It not only goes rancid faster than other grains, but it takes forever to cook. There have been countless occasions where the rest of my meal has gone cold as I waited for the brown rice to finish cooking, even when using the high-pressure setting on my Instant Pot.

Despite my frustrations with the kitchen staple, I struggled to find a substitute that offered the same nutty flavor, fluffy texture, and filling nutrients. Cauliflower rice was too watery, gluten-free pasta was too mushy, and farro was too inconsistent. My search for a quick-cooking carb eventually took me to Amazon, where I discovered the product that changed my dinners for good: RightRice.

The veggie-based rice alternative is made from a mix of lentils, chickpeas, peas, and rice that takes under 12 minutes to cook. It not only has a low glycemic index, but it packs 6 more grams of protein and 5 more grams of fiber than traditional white rice. Plus, it's vegan, gluten-free, and kosher. Basically, it sounds too good to be true—at least that's what I thought.

When the variety sampler of 6 flavors arrived—including Thai curry, lemon pepper, and Spanish rice—I decided to start by testing the "plain" original flavor. I felt it would provide the best insight into the product as a whole and work as a base for a veggie stir-fry. I followed the instructions to boil the water and then let the rice soak for 10 minutes, similar to cooking couscous.

After fluffing the cooked rice, I tried an overflowing spoonful. My tongue was pleasantly surprised by the array of flavors, which resembled a rice pilaf cooked in a flavorful broth. It was slightly salty with hints of onion—and I could have easily devoured an entire bowl without adding any additional sauces or condiments. Its texture was also impeccable: airy like white rice and not mushy or wet like other gluten-free grains.

Needless to say, I went through the rest of the box in record time. The garlic and herb was a standout, taking the flavor to the next level, while the Thai curry offered a healthy alternative to my go-to takeout order. I quickly put in a second order on Amazon for another sampler pack after deeming it the perfect, quick-cooking side for all my meals.

Like all good things in life, I preached about the divine dish to all of my friends immediately getting them equally hooked on the healthy grain. Similar to me, they couldn't believe how easy it was to cook, how delightful it was to devour, and how healthy the ingredients were. The only common complaint was the price point at just under $4 per package, but even they agree the convenience makes the price worth it.

So while I would never call RightRice a direct substitute for brown or white rice, I can confidently say it's better. I'm now consistently stocked with a few packages in my cupboard at all times—like it's the adult-version of boxed mac and cheese—and consider it my fallback dinner plan on busy workdays. And I consider the nutritional benefits just that, a benefit to a flavorful delicious meal.

Hungryroot's Delivery Service Is a Game Changer for Creating Healthy Meals Without Going to the Grocery Store
Was this page helpful? 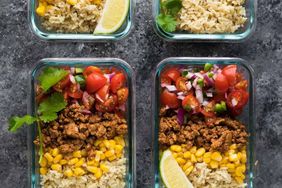 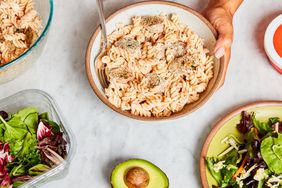