Everything you need to know about these super nutritious nuts, plus creative ways to cook with them and add them to your meals.

Almonds are nutrient powerhouses. Whether consumed whole, chopped, sliced, or ground into almond flour or almond butter, this deliciously satisfying nut truly deserves its superfood status. Here are six research-backed almond benefits, and simple ways to incorporate them into meals, snacks, and treats.

According to the United States Department of Agriculture (USDA), an ounce of almonds, which is about a quarter cup or 23 whole nuts, provides a generous amount of heart-healthy fat, along with 7 g of plant protein, 4 g of filling fiber (13% of the daily minimum), 20% for magnesium, B vitamins and smaller amounts of calcium, iron, and potassium.

Magnesium, per Medline Plus, plays a role in nerve and muscle function, keeps the heartbeat steady, and helps bones remain strong. It also supports a healthy immune system.

Crucially, an ouce of almonds provides half of the daily target for vitamin E (7 mg of 15 mg recommended). Vitamin E acts as an antioxidant, protecting cells from damage that can lead to premature aging and disease, according to the National Library of Medicine's Medline Plus. The vitamin also supports immunity, reduces inflammation, helps widen blood vessels to improve blood flow, and is linked to protection against neurodegenerative conditions, including Alzheimer's.

They're Packed With Antioxidants

As mentioned above, its vitamin E content makes almonds are a vital source of antioxidants. Much of the antioxidant content is concentrated in their brown layer of skin, per a 2016 review published in the Asia Pacific Journal of Clinical Nutrition.

The 2016 review one study that reported a significant reduction in oxidized low density lipprotein (LDL) in people after three months of consuming a Mediterranean diet which included 30 grams per day of whole nuts mixed at 50% walnuts, 25% almonds, and 25% hazelnuts.

Both raw and roasted almonds have been found to act as prebiotics, which serve as food for the beneficial bacteria in the gut linked to immunity, anti-inflammation, and mental health. In a 2016 study published in the Journal of the Science of Food and Agriculture, college students were randomly assigned to snack on almonds or graham crackers.

After eight weeks, researchers observed that the almond eaters experienced important changes in their gut microbiome makeup, including a decrease in a pathogenic bacterium, and an increase in the diversity of bacteria tied to positive outcomes, including weight management, insulin function, cholesterol regulation, and anti-inflammation.

The Health Benefits of Chicory Root, and How to Use It

They Keep Your Heart Healthy

Almonds protect your heart in several ways. According to a 2018 study in Nutrients, the nuts have been shown to maintain or increase "good" heart protective HDL cholesterol, while lowering "bad" LDL levels.

In a 2015 study published in the Journal of the American Heart Association, people with high cholesterol were divided into two groups which were randomly assigned to a cholesterol-lowering diet that contained either 1.5 ounces of almonds, or the same number of calories from a nut free muffin. After two weeks the nut eaters experienced a reduced LDL while maintaining HDL. The almonds eaters also had reductions in belly and leg fat.

The consumption of tree nuts, including almonds, has been shown to reduce body mass index, or BMI (a measure of weight compared to height) and reduce waist measurements, according to a 2015 study in Nutrition Journal. In addition to being satiating, the study found that the combo of healthy fat, plant protein, and fiber in almonds boosts feelings of fullness and delays the return of hunger.

Also, a 2012 study published in The American Journal of Clinical Nutrition found that almonds actually contain about 20% fewer calories than the labels state, because some of the calories are not absorbed from the digestive tract into the bloodstream.

They're Good for Skin

We know that good fats support skin health, but almonds may actually help turn back the clock when it comes to skin aging. In a 2019 randomized controlled study in Phytotherapy Research, healthy postmenopausal women were divided into two groups. For 16 weeks one group consumed 20% of their daily calories as almonds, and the other ate the same percentage as non-almond fare.

A facial photograph and image analysis system was used to assess wrinkle width and severity at the start of the study, and then eight and 16 weeks later. Researchers found that the almond group had significantly decreased wrinkle severity and width compared to the non-almond eaters. Not a bad perk for a tasty food with so many additional benefits!

How To Add More Almonds to Your Meals

Almonds are an easy portable snack as is, but they can also be incorporated into meals. Whip almond butter into a smoothie, drizzle it over overnight oats, use as a dip for fresh fruit or as the base for energy balls—combined with add-ins like minced dried fruit, chopped dark chocolate, spices, and seeds.

Coat baked or sautéed fruit with a crumble topping made from almond butter, a touch of maple syrup, rolled oats, and cinnamon. Sprinkle almonds onto a salad, cooked veggies, or a stir-fry. Use almond flour in place of bread crumbs to garnish lentil soup, spaghetti squash, or hummus, or in place of all-purpose flour in pancakes and baked goods. You can also toss veggies with a savory almond butter sauce made with veggie broth, minced garlic, fresh grated ginger, and crushed red pepper.

However you decide to bring them into your diet, don't be shy. Almonds are a super nutritious nut that can provide a range of health benefits from skin to gut. 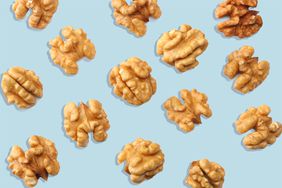 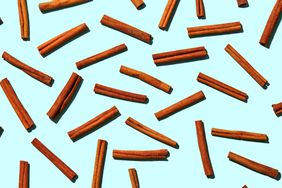 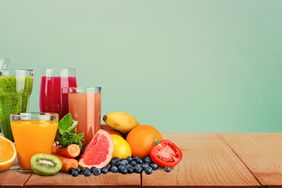