The FDA says that the drinks might contain metal bolts or washers. This is what experts say about how this could happen and why accidentally swallowing metal can be harmful.

The Coca-Cola Company is recalling several of its Minute Maid products over concerns about metal contamination.

The recall, which was voluntarily initiated by the company, was made after Coca-Cola determined that "foreign objects" could be found in certain drinks. According to a report on the US Food and Drug Administration (FDA) site, those foreign objects are metal bolts or washers, though it's unclear if they are whole or in pieces.

The recall impacts specific lots of 59-ounce cartons of the following:

In all, 7,475 cases of product are impacted. The affected products have January 2022 expiration dates and were distributed in Connecticut, Maine, Maryland, New Jersey, New York, North Carolina, Pennsylvania, and Virginia. You can see the exact UPC codes and dating information of the impacted products on the FDA's website.

This is a Class II recall, which, according to the FDA, means that the products can cause "temporary or medically reversible adverse health consequences" or that your chance of becoming sick from the impacted products is remote. (The FDA didn't specify which it is, or if both are the case.)

In a statement to Health, Coca-Cola spokesperson Ann L. Moore explained that the recall started in November and has been "completed," meaning it's highly unlikely that you would accidentally pick up an impacted beverage in stores right now. If you had already purchased an affected item and it's still in your house, you should throw it out.

"We took this voluntary action because nothing is more important to us than providing safe, high-quality products to the people who drink our beverages," Moore said.

This isn't the only recent recall over concerns about metal contamination. Last month, Kraft Heinz recalled a slew of powdered drinks, including ones from Arizona Tea, Country Time Lemonade, Kool-Aid, and Tang over concerns about small metal fragments in the mixes.

There are a few reasons why ingesting metal can potentially be dangerous. Here's what you need to know.

First, how can metal get into drinks?

It all comes down to the manufacturing process, food safety expert Felicia Wu, PhD, a professor at Michigan State University, tells Health. Things like metal pieces and shards can end up in your drinks (or food) if they break off during processing, she explains. And, Wu adds, "that can happen at any point in the manufacturing chain."

Darin Detwiler, associate professor of food safety at Northeastern University, tells Health that there are "a lot" of recalls around metal shavings, metal objects, glass, plastic, and rubber pieces ending up in food. "It can happen when machines are involved," he says. Some companies will scan their products to see if there is any debris in their products, Detwiler says, but it doesn't catch everything.

What can drinking pieces of metal do to you?

It depends on a few factors, including how big the metal is and whether it's in shards, Mark Conroy, MD, an emergency medicine physician at The Ohio State University Wexner Medical Center, tells Health. "The biggest concern is that the pieces could get stuck in your esophagus or somewhere in your stomach and would need to be removed," he says. "That would be an emergency." And if a piece of metal is sharp, it could "injure structures as it moves through" your body, he says.

There are even concerns about what the metal can do once it's in your stomach. "Once ingested, the stomach acid can allow the metal to degrade and absorb in [your] blood stream, leading to acute metal toxicity," Arashdeep Litt, MD, an internal medicine physician at Michigan's Spectrum Health, tells Health. And if larger pieces manage to get down your throat without you choking, they "can get lodged in narrow areas [along your digestive tract] and cause obstruction," Dr. Litt says.

How would you know if you ate or drank something with metal in it?

If you accidentally consume a food or drink contaminated with metal, you might develop symptoms like a feeling that something is stuck in your esophagus (the tube that runs from your throat to your stomach), pain with swallowing, or stomach pain. It's also possible to develop nausea, vomiting, swallowing issues, and a feeling as though you are full, Dr. Litt says. But "sometimes, you may not have any symptoms," Dr. Conroy says.

How do you get rid of the metal?

It depends. If you end up going to the ER with pain-related issues or if you know you've swallowed metal, doctors will likely do a scan of your abdomen to see what's going on in there, Dr. Conroy says. They'll then locate the metal, see if it's lodged anywhere, and take note of its shape and size. "If it's larger than 2.5 centimeters, that will usually tip them off that you might have trouble passing this," Dr. Conroy says. In that case, they may do an endoscopy, which involves inserting a long, flexible tube down your throat and into your esophagus, to try to grab the metal.

But if there's an obstruction, Dr. Calello says you may need surgery. If the piece of metal is smaller, though, and it doesn't appear to have sharp edges, your doctor may simply recommend that you try to pass it on your own. 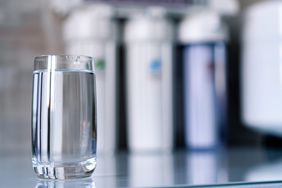 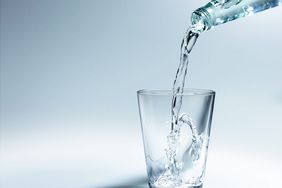