Chicken Broth Adds a Healthy Dose of Nutrients to Pasta

Here's everything you need to know to make pasta en brodo.

It's a weeknight, you have the fridge open, and you're starting to glaze over. You must have something in there that could constitute a meal, right? You spy a bowl of leftover pasta, but last night you used the good old "put an egg on it" trick. Tonight, you want something different—particularly if you're feeling like you need a boost of good-for-you minerals.

It's always a good idea to have homemade chicken broth on hand. Once you start making broth out of leftover bones, it becomes a habit. You can even make it in a slow cooker or pressure cooker.

Bring the pot to a boil, then lower it to a simmer. Allow it to simmer in a partially covered pot for a least four hours, skimming off any impurities as it cooks. (If you've used your pressure cooker, wait for it cool before use, and skim off the top.)

Freeze extra stock in an ice cube tray dedicated to chicken broth, pop the cubes into freezer-proof bags, and you'll have small amounts handy for risottos, sauces, and—crucially—noodles. Pasta en brodo (in broth) is a classic Italian preparation, and you're already familiar with the charms of chicken-noodle soup.

But there is more: Homemade chicken broth has bonafide medicinal benefits, according to research by Stephen Rennard, MD, of the University of Nebraska Medical Center. The study, first published in the journal Chest in 2000 and republished in 2020 at the start of the COVID-19 pandemic, examined the effect of his wife's chicken soup recipe on inflammatory markers in a test tube.

The results found chicken broth significantly inhibited neutrophil migration, a process that occurs in the early stages of an immune response. Dr. Rennard noted this action of chicken broth may reduce inflammation and cause fewer cold symptoms.

Cooking noodles in broth is as simple as it sounds: Just bring salted chicken broth to a boil—enough to cover the pasta (it doesn't have to be a ton)—and toss in short, stout noodles such as orecchiette, macaroni, or penne. Those tend to be easier to deal with than longer options, such as fettuccine or spaghetti, and plump up in a very toothsome, tasty fashion.

When the pasta is nearly done, add cooked vegetables or those that cook quickly, such as peas or finely chopped kale. When it's all ready, pour it into bowls without draining.

A few extra options: Add Parmesan rinds, which some people store in the freezer, to the broth as it comes up to temperature, then pluck them out just before adding the pasta. The rinds add an umami boom to the finished product. When the noodles are cooked and plated, add a final flourish of shaved Parmesan and a tiny swirl of olive oil to each bowl.

To add more protein, fold in canned or cooked white beans, such as cannellini. If you have parsley kicking around, chop it roughly and sprinkle it on top. If you're a pepper person, crack some pepper on there.

One reason this dish is so satisfying is thanks in part to the noodles' starch. Pasta cooking water is considered "liquid gold" in Italian cuisine and is often reserved to add to fancy sauces to help them emulsify. The noodles' starch thickens up the chicken broth in the same way.

Cooking your pasta in chicken broth may be an easy way to reduce inflammation and cold symptoms, as well as add some nutrients into an otherwise simple dish.

You end up with a lovely, tender pasta with a meaty, super-savory flavor profile in a little bit of broth: capellini, orecchiette, or macaroni en brodo. Very fancy, indeed.

10 Healthy and Easy Lunch Ideas for Work
Was this page helpful? 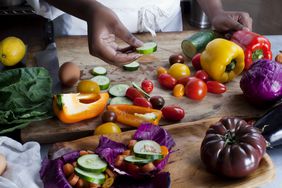 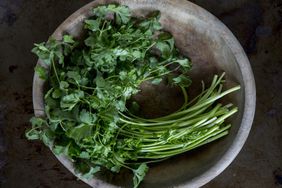 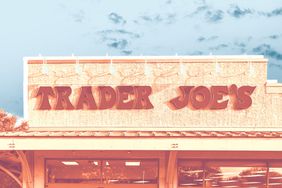 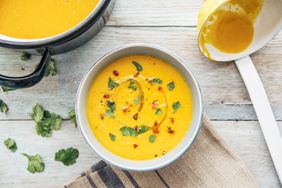