6 Things You Should Know About Zucchini

If you want a veggie that's extremely versatile, look no further than zucchini. Whether eaten raw or cooked, there are so many ways to enjoy it and still get a solid amount of a few vitamins and minerals you need. Zucchini actually falls under the umbrella of summer squash, which are squashes that get harvested before their rinds harden (unlike, say, pumpkins and butternut squash). Here are some other fun facts about this veggie that may surprise you.

First, How Many Calories Are in Zucchini?

Not many—in fact zucchini is super low in calories and makes the perfect light side dish for a heavy meal: One cup of sliced zucchini has about 19 calories. That's 40 to 50% lower than the same serving size for other low-cal green veggies like broccoli and Brussels sprouts. And because it's so versatile, you can enjoy this low-calorie food in so many different recipes, from baked fries to pesto roll-ups. Of course, you can always grill zucchini with herbs for some savory flavor, too.

You Can Eat the Blossoms

Even though zucchini is served as a vegetable, it's technically a fruit because it comes from a flower: it grows from a golden blossom that blooms under the leaves. They don't normally sell the blooms in the grocery store, but you can find them at farmers' markets. And these beauties aren't just for looking at—you can eat them, too. The most popular way to prepare them is fried or stuffed.

Zucchini May Be Good for Your Heart

Zucchini has a good amount of potassium: 295 milligrams per cup, or 8% of your recommended daily value. According to the American Heart Association, potassium can help control blood pressure because it lessens the harmful effects of salt on your body. Studies suggest boosting your potassium intake (while also curbing sodium) can slash your stroke risk and may also lower your odds of developing heart disease. Zucchini is also high in the antioxidant vitamin C, which may help the lining of your blood cells function better, lowering blood pressure and protecting against clogged arteries. One cup of sliced zucchini has 20 milligrams or about 33% of your daily value.

You Can Substitute It for Pasta

Sure, you can add zucchini to your spaghetti recipes, but you can also use it in place of noodles altogether. So-called "zoodles" are a great pasta alternative, and they're easy to make with the help of some kitchen gadgets. With a mandolin or a spiral slicer, you secure the zucchini on prongs and push the veggie toward the blades. Not only does it make things easy, but it's also kind of cool to see dozens of noodles cranked out at once. A smaller and less expensive option is a julienne peeler, which has a serrated blade to create thin strips.

You may be used to seeing a vegetable that's green and speckled, but there's a yellow variety of zucchini, and it's easy to confuse with yellow squash, a different type. The easiest way to tell the difference is to look at the shape. Yellow squash usually has a tapered neck, either crooked or straight, whereas zucchini of any color looks like a cylinder from end to end. Though not much is known about the difference between the varieties, some say golden zucchini has a sweeter flavor than the green kind. Because it retains its color after cooking, it also makes a sunny addition to any dish.

It Has an International Pedigree

Italians are thought to have bred modern zucchini from the squash they picked up in colonial America. "Zucca" is actually the Italian word for squash. That's why you'll see zucchini referred to as "Italian squash" in some recipes. Still, summer squash has been around for quite some time. The crop dates back to 5500 B.C. when it was integral in the diets of people living in Central America and South America, according to the University of Arizona Cooperative Extension. (And if you're in Europe, it may appear on menus as "courgette.")

13 Veggies You Only Think You Don't Like
Was this page helpful? 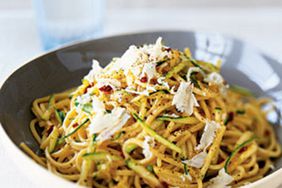