4 Things You Didn't Know About Honey

This sweet nectar is great for cooking, but it can also do a whole lot of good for your health.

Most people love honey for its tasty goodness. The natural sweetener helps balance flavors, thicken sauces, and add moisture to your dish, according to the National Honey Board. Although it is a versatile cooking ingredient, honey could also offer some health benefits. In honor of National Honey Month, here's four more reasons to thank the bees for this sweet nectar:

It can help coughs

Honey may prove to be a lifesaver this cold season. According to a study in the Archives of Pediatrics & Adolescent Medicine, researchers tested a single nighttime dose of buckwheat honey against honey-flavored dextromethorphan, a common cough suppressant, and no treatment at all in more than 100 children with colds. Overall, parents found that the honey was better than the other two approaches for relieving cough symptoms and improving sleep. No wonder the World Health Organization lists honey as a potential demulcent, a sugary liquid that coats the throat and soothes irritation.

It could help treat wounds

Honey has quite a long reputation as a healer. Its first written reference dates back to 2100-2000 BC on a Sumerian tablet that mentions the use of honey as a drug and ointment, according to the Asian Pacific Journal of Tropical Biomedicine. There's a medical-grade solution called Medihoney that is is derived from manuka honey, which comes from New Zealand bees that pollinate the native manuka bush. "The patches of Medihoney work fantastic on patients that come in with cuts and wounds," says Robin Miller, MD, a board-certified internist and co-author of The Smart Woman's Guide to Midlife and Beyond. "They're antibacterial and soothing."

Any type of honey might be helpful. In a study in the British Journal of Surgery, Nigerian researchers used honey to treat 59 patients with hard-to-heal ulcers. All but one of the cases improved, and infected wounds and ulcers became sterile within one week of applying the honey.

It may boost your locks

Got a flaky scalp? Honey might solve that problem. A study in the European Journal of Medical Research used a solution of diluted crude honey (90% honey diluted in warm water) on 30 people with seborrheic dermatitis, a scalp condition typically associated with some serious dandruff and itchy skin. The patients in this case also had lesions. Researchers had half of the participants apply the honey mixture to the lesions every other day for four weeks. Itching was relieved and scaling disappeared within one week for those who tried the honey treatment, and skin lesions went away completely within two weeks.

21 Reasons You're Losing Your Hair

There's a misconception that carbohydrates aren't good for you. Thing is, they're present in such a wide variety of healthy foods, including fruits, veggies, and nuts. Plus, your digestive system needs carbs to make glucose, which sends energy to your cells, tissues, and organs, according to the National Institutes of Health. At 17 grams of carbs per tablespoon, honey happens to be just one food source you can count on to help relieve a sluggish day. It also makes the ultimate snack before or after a workout. "In addition to being an antioxidant-rich source of carbohydrates, honey acts as a 'time released' fuel to provide athletes with more steady blood sugar and insulin levels over a longer duration," says Cynthia Sass, MPH, RD, Health's contributing nutrition editor.

11 Ways to Boost Your Energy With Food
Was this page helpful? 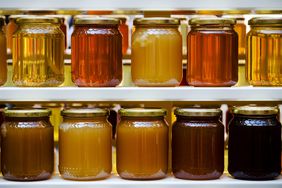