These meat- and dairy-free foods are chock-full of the powerhouse nutrient.

Proteins are known as the building blocks of life: In the body, they break down into amino acids that promote cell growth and repair. (They also take longer to digest than carbohydrates, helping you feel fuller for longer and on fewer calories—a plus for anyone trying to lose weight.) You probably know that animal products—meat, eggs, and dairy—are good sources of protein; unfortunately, they can also be high in saturated fat and cholesterol. What you may not know is that you don't need to eat meat or cheese to get enough of the essential nutrient. Here are 14 good vegetarian and vegan protein sources, and tips on how to add them to your diet today.

Foods in the legume family are good sources of vegetarian protein, and peas are no exception: One cup contains 7.9 grams—about the same as a cup of milk. (For the record, women should get about 46 grams of protein per day, and men need about 56.) If you don't like peas as a side dish, try blending them into a pesto, says nutritionist Elle Penner, RD. "I blend frozen peas, toasted pine nuts, fresh mint, and olive oil and serve over linguine," she says. "It's one of my all-time favorite meat-free meals!"

RELATED: What's the Difference Between Vegan and Vegetarian?

Most grains contain a small amount of protein, but quinoa—technically a seed—is unique in that it contains more than 8 grams per cup, including all nine essential amino acids that the body needs for growth and repair but cannot produce on its own. (Because of that, it's often referred to as a "complete protein.") Plus, it's amazingly versatile: Quinoa can be added to soup or vegetarian chili during winter months, served with brown sugar and fruit as a hot breakfast cereal, or tossed with vegetables and a vinaigrette to make a refreshing summer salad.

There are many different varieties of beans—black, white, pinto, heirloom, etc.—but one thing they all have in common is their high amounts of protein. Two cups of kidney beans, for example, contain about 26 grams (more than 3 cups of cow's milk, which contains 24 grams). And you don't have to make beans from scratch to reap their nutritional benefits, says Christine Gerbstadt, MD, RD, author of Doctor's Detox Diet. "If you want to buy them dried and soak them overnight before you cook them, that's fine," she says. "But it's also perfectly okay—and much easier—to buy them canned, rinse them, and heat them up over the stove."

RELATED: Going Back to Meat After Eating Vegan Made Anne Hathaway Feel 'Like a Computer Rebooting'

Foods made from soybeans are some of the best vegan protein sources: Tempeh and tofu, for example, contain about 15 and 20 grams per half cup, respectively. "They're highly nutritious, and they can really take on the taste and texture of whatever type of food you're looking for," says Gerbstadt. "I love that you can get a really soft tofu and mash it with a fork, or you can get a firm one and have a really substantial product that can stand in for meat."

Not crazy about meat substitutes? Get your servings of soy the way it appears in nature: Straight from the soybean, still in the pod. Boiled edamame, which contains 8.4 grams of protein per half cup, can be served hot or cold and sprinkled with salt. Try it as a snack, an appetizer before dinner, or added to salads or pastas (minus the shell, of course).

Vegetables don't have nearly as much protein as legumes and nuts, Gerbstadt says, but some do contain significant amounts—along with lots of antioxidants and heart-healthy fiber. "If someone is eating a lot of vegetables—and a wide variety of different types of vegetables—it will certainly add up to a good amount of amino acids," she adds. Two cups of raw spinach, for example, contain 2.1 grams of protein, and one cup of chopped, cooked broccoli contains 3.72 grams.

Adding hemp to your diet does not mean you're eating rope (or marijuana), says Gerbstadt; you can find it in some cereals and trail mixes, or you can buy hemp seeds (10 grams of protein in 3 tablespoons) and add them to smoothies, pesto, or baked goods. Hemp milk can also be a dairy-free way to get protein as a vegan, and it's even lower in calories than skim milk.

These seeds are another high-protein vegan food, and an easy way to add protein (4.7 grams per ounce, about two tablespoons) and fiber to almost any recipe. Chia seeds can be sprinkled over salads, stirred into yogurt or oatmeal, blended into smoothies, or they can take center stage: They plump up and take on a gelatinous texture when soaked in a liquid, forming a rich and creamy pudding-like treat.

Don't discount the other seeds in your pantry, either; the more familiar varieties are also high in protein and healthy fats, says Gerbstadt. (Per volume, sunflower seed kernels contain the most protein—7.3 grams per quarter cup—followed by sesame seeds and poppy seeds at 5.4 grams each.) Try thinking of outside-the-box ways to add more seeds to your diet. "Instead of saving poppy seeds for once a year for your holiday bread, try adding them to a vinaigrette," she suggests.

Another meat substitute popular with vegetarians, seitan is made from wheat gluten and seasoned with salt and savory flavors. It's loaded with protein—36 grams per half cup, more than either tofu or tempeh. It looks like duck meat and tastes like chicken, and can be used in any recipe that calls for poultry.

Milk alternatives aren't just for the lactose intolerant. They can be great vegan protein sources; just watch out for lots of added sugar and flavors, says Penner. (Plain soy milk, for example, contains about 100 calories per cup—comparable to skim milk's 80 calories—but the flavored varieties can contain much more.) Soy milk has the most protein, at 4 to 8 grams per 8 ounces, but almond, hemp, and rice milk also contain about 1 gram per cup.

RELATED: Oat Milk Is the Latest Trendy Non-Dairy Milk—but Is It Actually Healthy?

Bet you didn't know you can get protein from chocolate! Unsweetened raw cocoa powder—the type used in baking or making hot chocolate from scratch—contains about 1 gram of protein per tablespoon. The powder is bitter all by itself, however, so most traditional recipes call for lots of sugar as well. For a healthy hot cocoa, use an unsweetened plant based milk and a small amount of an all natural sweetener, like pure maple syrup or date sugar. Or add cocoa powder to air-popped popcorn (along with a bit of sugar, allspice, and cayenne pepper) for a sweet and spicy whole-grain treat.

All nuts contain both healthy fats and protein, making them a valuable part of a plant-based diet. Almonds, cashews, and pistachios for example, all contain 5 or 6 grams of protein per ounce—with nut butters providing similar amounts for a two tablespoon portion. "Look for brands with as few ingredients as possible—just nuts and maybe salt," says Penner. "Skip the ones with hydrogenated oils or lots of added sugar," she adds.

Also known as garbanzo beans, these legumes are a versatile vegan protein source. They can be tossed into salads, oven-roasted and salted as a crispy snack, or pureed into a hummus. They contain 7.3 grams of protein in just half a cup, and are also high in fiber and low in calories. "You can make a really great meal with some whole-wheat flatbread, some veggies, and some homemade hummus," says Gerbstadt. "Just toss a can of chickpeas in the blender with some herbs and some tahini or walnut oil and you're good to go."

RELATED: Is Hummus Healthy? Here's What a Nutritionist Wants You to Know

For those looking to replace whey protein powder with a plant based alternative, there are numerous options to choose from. You'll find powders made from pea protein, derived from yellow split peas, almond protein, and blends that combine protein from sources that include whole grains, like brown rice, buckwheat, millet, along with seeds and legumes. While the protein content varies from product to product, most provide about 20 grams per quarter cup scoop.

Powders are an easy way to significantly boost the protein content of a smoothie, or bolster the protein level in plant based dishes like pancakes, savory soups, and treats like puddings or frozen pops. Look for plain, unsweetened versions. In addition to being more versatile in the kitchen, you can sweeten yourself if needed with an all natural option like maple syrup, and control the amount you add.

Pea milk is a relative newcomer to the plant milk scene, but it offers some unique properties that set it apart from other options. Made from yellow split peas, pea milk is not a common allergen, unlike nuts, soy, and traditional dairy. It packs 8-10 grams of protein per cup, an amount equivalent to or greater than cow's milk. Most brands are also fortified with key nutrients found in dairy milk, including calcium, vitamin D, again at the same levels or greater than those found in dairy. Use it in coffee, cereal, creamy soups, sauces, or any other recipes that call for milk.

The popularity of plant based eating has spurred the growth of dairy free alternatives beyond plant "milk." These days you'll find yogurts made with nuts, like almonds and cashews, as well as pea protein, soy, and coconut, which offer the same probiotic benefits as their traditional counterparts. And some pack a powerful protein punch. A single serve container of plain Greek style almond-based yogurt can contain up to 11 grams of protein, and a plant version made with pea protein supplies roughly 6 grams. Check the ingredients and labels, as both can vary significantly from product to product. Use them just as you would dairy yogurt—in parfaits, overnight oats, smoothies, or mixed with fruit and nuts as a healthy breakfast or snack option.

This hearty member of the pulse family, which includes beans, lentils, peas, and chickpeas, is traditionally eaten in the south on New Year's Day to bring good luck. But black eyed peas deserve a place in your pantry all year round. A one cup portion provides a whopping 40 grams of protein, along with 16 grams of filling fiber – over 50% of the daily minimum target, and generous amounts of B vitamins, immune-supporting vitamin A, and key minerals like magnesium, calcium, potassium, iron, and zinc. Add black eyed peas to salads, soups, stews, stir frys, or nearly any dish that calls for beans.

Nutritional yeast is a staple in vegan diets, as a reliable source of vitamin B12, a nutrient found in few plant based foods that plays a role in energy production, red blood cell formation, and DNA synthesis. Per tablespoon, nutritional yeast also provides 5 grams of plant protein.

Typically sold in a shaker that resembles Parmesan cheese, nutritional yeast can be used in similar ways. Sprinkle it onto popcorn, cooked veggies, or potatoes, or use an ingredient in plant based soups, or homemade nut "cheese" recipes, like cashew queso.

RELATED: What You Need to Know About Nutritional Yeast 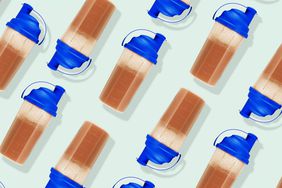