What Are the Benefits of CrossFit Training?

Anyone can perform these high-intensity workouts that improve stamina, strength, and speed.

The high-intensity training program known as CrossFit is often a polarizing topic of conversation. When approached about the subject, people may fall into either the "I love it" or "I hate it" category.

Devotees of the "sport of functional fitness," as some refer to CrossFit, claim it's the best and fastest route to physical health, while skeptics point toward the risk of injury. But as with most dividing subjects, some disagreement regarding CrossFit may be due to people being fuzzy on the details of what the training program entails.

"There's a lot of misconceptions around what CrossFit is," explained Dave Lipson, CrossFit Level Four Trainer and founder of an educational fitness platform called ThundrBro. "People think it's what you see on TV, that it's just the professional CrossFit Games athletes you see on ESPN, but it's not."

So, what is CrossFit? Here's what you need to know about the benefits of CrossFit before deciding whether the intensive training program is for you.

What Is CrossFit Training?

In a review published in 2018 in the Sports Medicine - Open journal about CrossFit, researchers defined the high-intensity training program as strength-building conditioning. It incorporates functional movements that build stamina, strength, and speed, among a number of other areas.

But what does that actually mean?

"From an exercise perspective, CrossFit takes all aspects of fitness and sports, cherry-picking the best, most effective, and most applicable to everyday life, and combines them together," said Rich Froning Jr., a professional CrossFit athlete.

Functional movements are those that mimic the things you do outside the gym—including carrying groceries from your car to the kitchen, picking up a baby, lifting a chair off the ground, climbing the stairs, and getting out of bed. The fitness program refers to those functional movements as "workouts of the day" (WOD).

"These functional movements reflect the best aspects of gymnastics, weightlifting, and monostructural [cardio] exercise," explained Tony Carvajal, a professional CrossFit athlete. "It's a workout program that integrates multiple sports and training regimens all in one."

Well, CrossFit isn't a franchise. Instead, it's an affiliate, explained Tanya Wagner, a professional CrossFit athlete and coach at CrossFit Apex in Souderton, Pa. Essentially, each gym—also known as a "box"—is unique.

"That means every box has its own individual programming and style. It's not one-size-fits-all," said Wagner.

But for the most part, CrossFit sessions last one hour, broken down into four different components: a warm-up, a strength or skill, a WOD, and a cooldown or mobility session.

The warm-up prepares your body for the WOD. Per the American Heart Association, warming up your body before any workout braces your muscles to receive oxygen by dilating your blood vessels. Also, by increasing the temperature of your muscles, warming up allows you to maximize your full capabilities during your workouts.

Next, the strength component has one goal. And—as you can guess—it's to make you strong. It can take different forms. For example, you might complete multiple sets of the maximum amount of weight you can deadlift or six sets of three power snatches (lifting a weighted bar over your head while partially squatting).

On the other hand, a skill workout helps improve your ability to do a specific exercise, like double unders (swinging a jump rope twice under your feet) or handstand walking. Typically, the skill that you choose makes an appearance during the WOD.

The WOD—also sometimes called metabolic conditioning, or a "metcon"—is the main event of a CrossFit session. Essentially, you combine exercises, either lasting for a set amount of time or until you complete a set amount of repetitions. If you are accustomed to 60 minutes of nonstop movement in your favorite boot camp, it may surprise you to learn that most WODs last five to 15 minutes. Anything longer than that is known as an endurance WOD.

There are so many possibilities WODs that you probably embark on the same one more than once at the gym. But there are a few benchmark and hero workouts—the latter of which are in honor of fallen servicemen. Those workouts help track your progress and qualitatively show any improvements over time, explained Anthony Gustin, founder of a meal replacement program called Perfect Keto.

Lastly, a typical CrossFit session ends with a cooldown or mobility session, in which you stretch following the high-intensity part of the workout. For instance, after a "grippy" workout, like pull-ups or jumping rope, you may do a series of forearm stretches. The American Heart Association reports that stretching after working out prevents lactic acid from building up in your muscles. Lactic acid buildup often leads to muscle cramping.

The Benefits of CrossFit

"Whether your fitness goal is to help you maintain your current fitness level, get just 1% fitter, lose weight, do a pull-up, or be able to lift a certain weight, CrossFit can help you reach it," said Kyra Williams, a professional CrossFit athlete, and personal trainer.

Some research supports CrossFit's effectiveness. In a study published in 2013 in ACE ProSource, exercise physiologists out of the University of Wisconsin–La Crosse found that women who performed two different WODs burned over 12 calories per minute and maintained an elevated heart rate throughout the entire session.

CrossFit can also have positive effects on mental and emotional health.

"It teaches people that they are capable of more than they think. Gaining mental toughness and pushing yourself to new heights in a CrossFit class can trickle down to other parts of your life and give you the confidence to tackle the unknown," mentioned Gustin.

There's also a community aspect of CrossFit. Sure, you could do a workout by yourself, but part of the magic happens inside the box, explained Clint Fisher, co-owner and general manager of CrossFit Charleston in S.C., where he also coaches CrossFit athletes.

"There is just something that happens when you get like-minded people in the same room. You lift each other up. You become a family," said Fisher.

Will I Get Injured if I Try CrossFit?

Despite gruesome stories you may have heard, the risk of injuries during CrossFit sessions is not higher than in any other type of workout.

In a study published in 2018 in the Orthopaedic Journal of Sports Medicine, researchers found CrossFit training to be safe. The researchers acknowledged that people often raise questions about high-intensity conditioning, like CrossFit. However, after conducting a four-year analysis studying the number of injuries among CrossFit athletes, the researchers found that their evidence did not support those concerns.

For example, consider rhabdomyolysis (rhabdo, for short). According to the Centers for Disease Control and Prevention (CDC), rhabdo is a condition that causes muscle tissue to break down so severely that it damages the heart and kidneys and is a risk for any high-intensity workouts.

However, it's no more common in CrossFit than in any other workout, claimed Lipson. Plus, you can take steps to avoid rhabdo—including smart coaching and thoughtful programming, Lipson also advised listening to your body and building up workout intensity gradually.

So, How Do I Know if CrossFit Is for Me?

It's possible that you've previously heard CrossFit athletes swear the workout is everyone. Well, it turns out that, according to those athletes, it truly is for people of any gender and age or at any stage of their lives.

"We have former football players working out with people in their 70s and 80s and new moms," explained Lipson.

CrossFit sessions appeal to all different types of people. That is because while every WOD has suggested weights and movements, the majority of CrossFit boxes promote a practice called scaling.

"Scaling allows anyone to complete the same workout simply by altering the weights and movements based on the athlete's ability in order to produce the same level of intensity," explained Carvajal.

For example, suppose a WOD calls for 50 repetitions of toes to bar (touching your toes to your hands while hanging from a pull-up bar). The coach might ask one person to scale the repetitions down to 25 while another person touches their knees to their elbows.

How to Get Start CrossFit Training

First, check the official CrossFit affiliate map to find a box near you. Then, do some research.

"Most gyms will have the coaches' credentials on their website. The more certifications and accolades, the better," explained Carvajal.

But credentials aren't everything. A coach's leadership style, communication skills, and emphasis on form and safety in class are what Wagner said matter most.

"You should find a place that you personally feel comfortable getting all your questions answered," added Wagner

And don't be afraid to shop around to find your perfect box.

"Every box has a different community and vibe," mentioned Lipson. "Some are younger, some are older. Some are more competitive, while others have a more community vibe."

So, if you're not vibing with one particular CrossFit space, try another. And once you find a box, the only real way to know if you like CrossFit is to try it. 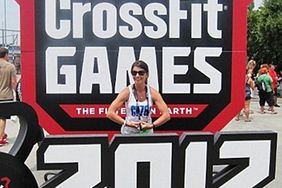 The One Piece of Workout Equipment I Can't Live Without
How Many Days a Week Should You Work Out? Here's What Trainers Say 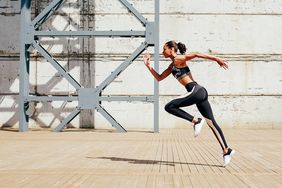