Once you start moving (even if you're running one block at a time!), it becomes a habit—one you won't just learn to like, but might actually start to crave.

There's no way around it: Running is hard! The mere thought of lacing up and hitting the road can be intimidating and overwhelming, even if the basic movement is something you've been doing for almost your entire life.

But running is also exhilarating—it can actually cause the same kind of neurochemical adaptations in the brain's pleasure and reward centers as some addictive drugs (hence, the "runner's high"), according to a 2015 study published in the Neuropharmacology Journal. And it comes with big benefits: Even less than 50 minutes a week (whether that means one run or four 10-minute runs) may lower your risk of early death from all causes by 27 percent (and by 30 percent and 23 percent for cardiovascular disease and all types of cancer, respectively), according to a recent study published in the British Journal of Sports Medicine. On the mental front, running can be as effective as antidepressants in treating mild to moderate depression, according to a review of studies published in the journal Clinical Psychology: Science and Practice.

And there's more good news: To do it, you just do it. If you're starting from zero, run around the block or run for five minutes straight. The next outing, try to increase it by 10 to 50 percent—so you'll add on another block or up your running time by a few minutes. It won't be long before you're logging distances that once seemed impossible to you.

These Are the 6 Best Strength Exercises for Runners

Motivate With a Race

Signing up for a race that's at least four months away gives you a good goal to work toward and enough time to establish a fitness base, says Amanda Nurse, an elite runner and personal coach in Brookline, Massachusetts.

The most important thing any athlete needs for an event is the endurance to complete the distance, says Janet Hamilton, CSCS, an exercise physiologist, a coach, and owner of Atlanta-area company Running Strong. "Endurance is built over time in the form of easy-effort training and gradually increasing total volume, meaning your total weekly miles and longest long run."

A 5K is a great place to start. Figure about four months for training; there are plans that call for a shorter training period, and those are fine if you can hit every workout. But because life is unpredictable, that's not exactly realistic. "You should build in a couple of weeks in case your training doesn't go well or you get sick," says Nurse. "Give yourself wiggle room to deal with anything that might interfere with your training," says Hamilton.

When it comes to choosing a race, find one that speaks to you, says Nurse. That may mean traveling to a city you love or selecting an event with huge spectator support. "The more excited you are about the course, the more motivated you'll be to train for the race," she adds.

But there's nothing wrong with staying close to home. "Picking something local is always a good idea because then you get to sleep in your own bed, eat your own foods, and eliminate some of the logistics of navigating your way around a new location," says Hamilton.

No matter what, read course descriptions and race reviews—if you see the words flat and fast, that's a good thing, whereas tons of hills or minimal aid stations might be more challenging.

Google "race training plan," and you'll get an intimidating number of results. Forget the plan for a second, and remember this: "The goal is to go gradually and avoid overuse injuries," says Steven E. Mayer, MD, sports medicine physician at the Northwestern Medicine Running Medicine Clinic.

Before you pick an actual plan, you need to be realistic about where you are. Total beginners who aren't currently running at all should start with the walk/run method, says Hamilton. It's pretty simple: You run for a short segment, and then take a walk break; repeat. Increase the amount of time running and decrease the amount of time walking with every workout until you're running continuously.

10 Moves for a Cardio Workout at Home—No Equipment Required

If you can run a mile at a time, you're looking for a more running-specific plan. Start with one and a half or two miles straight; then you can slowly build up. If you're new to running, you shouldn't be following a plan that has you running more than every other day, says Dr. Mayer. That's where cross-training comes in— "swimming, biking, or yoga are activities that allow you to keep fit without impact," he says. Resistance training is also important to any plan, he adds: "The stronger your core and hip musculature get, the better you'll perform."

Consistency is key, but sometimes there are days when you would rather do literally anything else besides lace up your sneakers. Use our science-backed tricks to stay motivated.

Find a workout buddy. It's tougher to flake when someone else is counting on you. Studies show that exercising with someone makes you more likely to work out more frequently and push yourself harder. Even if you don't actually exercise with someone, seeing friends post about workouts on social media can inspire you to run farther and for longer, a study published in the Journal of Nature Communications found.

Pump up the jams. Music can increase endurance by 15 percent, according to a study published in the Journal of Sport & Exercise Psychology from Brunel University London. And in high-intensity workouts, motivational music—i.e., anything more than 120 beats per minute (bpm)—can actually increase your heart rate and push your power output so you can work harder, while making the workout feel more enjoyable, according to a new study published in the journal Psychology of Sport and Exercise.

Smile. Running isn't a punishment—you get to run. You're choosing to chase that runner's high. Act like you enjoy it! Runners who smiled used less oxygen ran more economically and had a lower perceived rate of exertion than runners who frowned or who didn't think about their facial expressions, according to a study published in 2018 in the journal Psychology of Sport and Exercise.

You don't need much on the run, but these essentials will keep you comfortable and confident.

Running socks. A good pair of socks goes a long way in protecting your feet and making logging miles feel better. Look for a lightweight, moisture-wicking pair, says Hamilton. They will keep your feet dry and prevent moisture from building up and causing blisters, chafing, and hot spots.

Sneakers. Don't just buy what you see the elites (or your friends) wearing or the cheapest pair you can find. "Go to a good running store; have them look at your feet," says Dr. Mayer. They can assess your gait and recommend shoes. They may suggest more or less cushioning and a neutral or stability shoe (the latter corrects excessive pronation or tilting of the foot). The lingo can be confusing, but just remember that the most important factor is how the shoes feel on your feet. Comfort is key.

Sports bra. Thirty-two percent of female marathon runners reported dis- comfort, which was significantly related to cup size, according to a study in the British Medical Journal of Sports Medicine. Make sure you're getting fitted for the right bra size, and opt for a high-impact design to protect your girls.

Surprise: Running isn't about nailing the perfect form. "The way you run is the product of how you're built, and largely driven by reflexes," says Hamilton. When you overthink it, "you're probably going to make it less efficient." And as you get stronger, your gait is going to evolve to be even more economical. Follow these head-to-toe form cues, and get a better run.

Head. "Keep your gaze 5 to 10 feet in front of you," says Dr. Mayer. Your eyes lead your head position, and looking too far down or up can cause your shoulders to hunch or your back to arch, both of which hinder efficiency.

Torso. You should be running tall, advises Hamilton. Keep your chest proud and your spine straight. Slumping over (which happens when you're tired) can cause neck, shoulder, and lower back pain.

Arms. Let your arms swing naturally, but try not to let them cross in front of your torso—too much rotation slows you down. "Pretend you're holding a potato chip between your thumb and first finger" to avoid tension, says Hamilton, and keep your thumbs pointing up to naturally relax your arms.

Hips. Try to minimize overly rotating your pelvis. "Your hips should be as symmetrical as possible to provide a strong base from which your legs can do the work," says Dr. Mayer.

Ankles. "The most efficient way to run is with a slightly forward lean, which should come from your ankles, not a bend in your hips," says Dr. Mayer. It should feel like you're in a controlled fall.

Feet. "Think about light, quick steps and keeping your legs underneath you," says Hamilton. Longer strides require extra vertical movement, which wastes energy. Your foot should hit the ground directly under or slightly ahead of your hips.

Common Injuries, and How to Avoid Them

Certain aches and pains are normal as your body gets used to the repeated impact of running. Not sure what's going on? Make time to see a specialist. Here's a primer.

Most running injuries start out minor but will get worse if you keep pushing too hard. With beginners, injuries tend to strike from the hips down, says Dr. Mayer, and that's typically due to a weakness somewhere higher in the body, which is exacerbated by the repetitive nature of running.

"The common thread is inadequate flexibility and inadequate strength," says Hamilton. This is why prioritizing mobility work and resistance training is still important even when you're focusing on logging miles.

Otherwise, "wearing appropriate running shoes, making sure to change them out every 300 to 500 miles, using different running surfaces, stretching, foam rolling, and giving yourself enough recovery time can help you avoid most of these [issues]," says Dr. Mayer.

Runner's knee. A.k.a. patellofemoral pain syndrome, or pain around or behind the kneecap.

Shin splints. Inflammation of the muscles, tendons, and bone tissue around the tibia.

Plantar fasciitis. Pain in the heel or along the arch of the foot can occur during the push-off part of your stride.

IT band syndrome. Pain on the outside of the knee is caused by inflammation and irritation from when the iliotibial band rubs back and forth across the bony protrusion at the base of the femur.

Piriformis syndrome. Compression of the sciatic nerve around the piriformis muscle (located in the butt near the top of the

hip joint) that can happen when it spasms or gets too tight.

Achilles tendinitis. Dull or sharp pain, sometimes stiffness, along the back of the tendon but typically close to the heel. 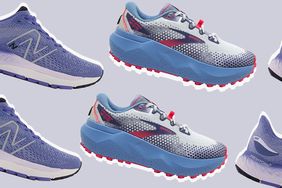 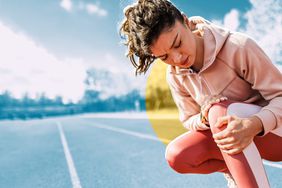 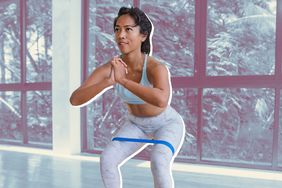 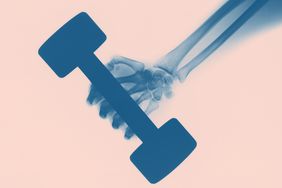