Two people filmed their adverse reactions to trying the trend.

TikTok is full of workout advice. One of the trends that made the rounds on the social media app is "dry scooping" your pre-workout powder.

For the most part, people come away from the trend unscathed. But two people had a pretty scary reaction to dry-scooping: One shared that they had a heart attack, and another couldn't breathe and needed her inhaler.

Those cases are pretty alarming—so, what's going on here? Is dry scooping pre-workout a good idea, or should you avoid it altogether? Here's what you need to know before you reach for a scoop.

"Taking a dry pre-workout scoop [because] I saw it trending on TikTok," TikTok user Briatney Portillo wrote in a caption over a photo with a rainbow clown face filter. "Ending up in the hospital because I had a heart attack."

In an interview with BuzzFeed, Portillo, 20, described a "heavy feeling" in her chest and "slight pain" after trying dry scooping. But Portillo added that it "wasn't too bad" and went to her job as an exotic dancer. Portillo said she "started sweating a lot" despite wearing a bikini.

Portillo developed more intense chest pain that spread to her back and arms.

"My left arm went slightly limp, so I knew those were symptoms of a heart attack. I called 911, and the ambulance came," said Portillo.

Portillo eventually shared in comments on TikTok that she had what's known as a non-ST segment elevation myocardial infarction (NSTEMI). According to the National Library of Medicine, an NSTEMI is a partial or temporary blockage of blood flow to the heart.

"I have no heart conditions, and I still got messed up," added Portillo.

TikTok user @bagels4everr also had a scary incident after dry scooping. In her TikTok video, they scoop pre-workout at the advice of another person in the video. They take a deep breath and then take the powder like a shot, tipping their head back.

They take a sip of water but start to gesture that they can't breathe, managing to get the words "I can't breathe" out as tears flood their eyes. They continue burping and gasping for air as the other person searches for their inhaler. The video cuts out before they get the medical device.

Pre-workout generally refers to pre-workout supplements or powders that people take before they exercise. The ingredients vary between brands.

"The powders typically have caffeine, B vitamins, sometimes creatine," Albert Matheny, RD, CSCS, co-founder of SoHo Strength Lab, Promix Nutrition, and ARENA, told Health. "Some have amino acids like tyrosine [...]. They're ingredients that are meant to improve your workout performance."

So, what's making people jump on the bandwagon and attempt the TikTok trend? Well, people may be dry scooping pre-workout to get even more concentrated energy before they exercise, to help them work out longer and harder.

Is Dry Scooping Pre-Workout Bad for You?

There are a few potential issues with dry scooping pre-workout. The first is the choking risk, as demonstrated by @bagels4everr's TikTok video.

"You could very easily choke on that," Kathryn Boling, MD, a primary care provider at Mercy Personal Physicians in Lutherville, Md., told Health. Dr. Boling added that dry scooping could also fuel dehydration, diminishing the energy you're trying to obtain.

But one the most significant issues is the big hit of concentrated caffeine you can get from dry scooping pre-workout, explained Dr. Boling. The caffeine content in pre-workout varies, but some powders have 250 milligrams of caffeine in one scoop. According to the Department of Agriculture, that amount of caffeine is nearly three times the amount in one cup of coffee.

In addition, those powders aren't tightly regulated by the Food and Drug Administration, so it's hard to know if the amount of caffeine on the label is what you're getting.

If you're dry scooping pre-workout jammed with 250 milligrams of caffeine or more, "that is a pretty big amount all at once," said Dr. Boling.

"Mainlining a ton of caffeine is not good for your heart," agreed Matheny.

It's unclear whether dry scooping would give someone a full-blown heart attack, especially a healthy individual. Instead, said Dr. Boling, it's more likely that dry scooping pre-workout would exacerbate an underlying heart issue.

The bottom line regarding dry scooping pre-workout powder, according to experts: Skip it.

"Don't do this," reaffirmed Dr. Boling.

And remember to hydrate and refuel your body after a workout properly, as well. Consuming carbohydrates and proteins will help fuel, repair, and grow your muscles. 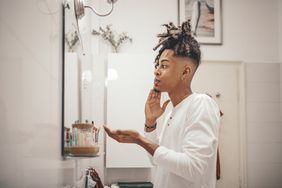 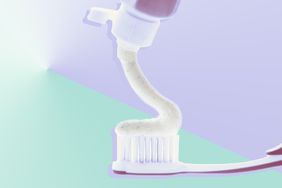 How Much Toothpaste Should You Use?